Why aren't there PCIe RAM expansions?

Perhaps I may be overlooking some aspect that is an important cause as to why these don't exist, but I feel that having RAM expansions through PCIe would be perfectly feasible. I know that a lot of operating systems use virtual memory and store some lower priority items on hard disks, but considering the lower speeds I feel that we could use some bonus not-quite-as-fast memory.

Sure, 8GB/s isn't as fast as actual RAM, but it's 10x the speed of SATA. Why not have a PCIe board with a couple of RAM slots for use with the old RAM that you just replaced with that recent upgrade? PCIe has the benefit of being on almost every motherboard out there. One 'adapter' PCIe RAM Expansion Board would be (supposedly) compatible most PCs.

What am I missing since this hasn't been done yet?

This is a complex issue, that is highly dependent on exactly what you want to do with that RAM.

In most cases, it is cheaper and better to simply replace the motherboard with a new motherboard that supports the amount of RAM that you require. I have a motherboard here in front of me that can take 16 memory modules. The largest module available is 32-Gig. That's a total of 512 Gigabytes in a single machine. (Never mind that 16 modules of that size would cost about US$14,000, or that the MoBo also has dual 8-core CPU's on it.)

Having the RAM on the MoBo means that it is the highest speed possible. You can use it for both a RAM-Disk as well as normal program and data storage. The best of both worlds.

But in your question you keep comparing it to SATA storage, so I am thinking that you'd want to use this extra RAM as a RAM-disk and not for general CPU RAM. This is a valid use, and years ago people did have PCI cards with lots of RAM on it specifically for this purpose. Those cards looked like another disk drive, and not just more CPU RAM. Often these cards had an external power connector on them so you could give them some sort of backup power in case the main power failed.

These types of cards have largely gone away. They were obsoleted mainly by three things: 1. Motherboards now can have much more RAM on them than in the past. 2. There are more modern solid-state drives using Flash memory and PCIe (some with large RAM caches) that work better. and 3. They were just too expensive for what limited advantages it gave.

There are other reasons why you might want to have a PCIe card with lots of RAM, but all of them are applications where the card is doing something other than just storing data. Like Video cards, or data acquisition cards. These things do not apply here.

This has been done; many years ago you could buy ISA cards (pre-PCI) with RAM on, which presented to your PC as either "extended" or "expanded" memory. This was a way to get past the 1MB limit of the original PC.

Modern PCs have a section of extra RAM attached to the video card, separate from main memory.

The reason why you don't get RAM expansion cards nowadays is that latency is a serious problem. There isn't really any provision in the OS for preferred versus non-preferred RAM, so you'd have to use it as a swap disk / pagefile.

This technology is arriving with the evolution of PCIe and DRAM, although we need to wait for the coming generations of both.

Samsung’s unveiling today is of a CXL-attached module packed to the max with DDR5. It uses a full PCIe 5.0 x16 link, allowing for a theoretical bidirectional 32 GT/s, but with multiple TB of memory behind a buffer controller. In much the same way that companies like Samsung pack NAND into a U.2-sized form factor, with sufficient cooling, Samsung does the same here but with DRAM.

I'm a bit skeptical about the technology labels used here, especially PCIe 5.0 which might actually mean PCIe 4.0, as it sounds identical, and I don't think that Samsung will announce today hardware that will only be usable several years from now and for a standard that doesn't yet exist.

The article notes that a DRAM slot is usually rated maximum for ~18W. This means that a 2 TB add-in CXL module like this might need around 70-80 W, which would likely require active cooling and a big heatsink.

This kind of hardware is evidently destined for special-purpose computing, not for ordinary desktop usage. 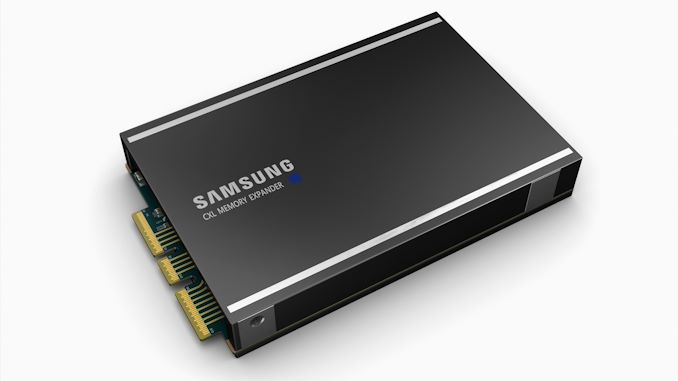 Modern server systems achieve up to 75GB/sec between CPU and main memory and even mid-grade systems can support up to 768GB total DRAM capacity. Any requirement to scale beyond that with faster-than-SATA speeds is covered by FLASH PCIe solutions that boast x8 PCIe speeds and many TB of capacity without the data volatility issues associated with DRAM.

Adding to pjc50's reasons, it wasn't successful with PCI cards either, see this discussion for more details.

With main memory being larger, there is also less of a need.

I've always wanted to do something about turning piles of obsolete left over ram into a ramdisk type of device. Unfortunately, with the way technology moves so fast these days, obsolete ram is typically at least an order of magnitude lower density and higher power consumption than system ram, so it doesn't make much sense even if it would be amusing.

The modern current equivalent of the ram card is Optane memory, which is cheaper and higher density (but slower) than the equivalent amount of regular ram. This is available both in PCI form factor and in standard DIMM form factor. Some versions of this can be dynamically repartitioned between acting like slow ram and acting like an extremely high speed disk. A few high end motherboards are designed to take Optane memory in regular ram slots. I'm not familiar with what kind of OS support is required to handle this, but the pci/sata/nvme versions just look like a regular disk.

32x pci-e bandwidth isnt far from that. but

the ram has NANO seconds of latency while the ssd would have Millaseconds but thats also not a limitation of pci-e, thats purely current affordable retail storage. there is specialty non-volatile storage that could achieve this but the with the 50k price tag, i don't think retail would see this for atleast 10-15 years.

although, if you literally used ram modules on a custom board and the motherboard firmware would allow it to detect it as memory. technically, it would work to extend memory. the underlying tech is there for it to work. "<3 pci-e"

The most recent incarnation of PCI RAM cards was produced by Gigabyte in 2005 and 2006 under the names i-RAM and GC-RAMDISK, respectively. They supported 4 slots totaling 4 GiB of DDR-400. The transfer rate was that of SATA, 150 Mb/s, and the latency of 0.1 ms.

I believe it is already stated that Gigabyte tried this and there were even attempts back in the 286 days. I've been around long enough to have bought and used both (I think I have the most recent version still on the shelf in my lab). The problem is every time it's been thought up designed, manufactured, and sold it, sales flopped. Last gen RAM is only guaranteed cheap if you already have it. After it becomes lest-gen there are unstable pricing curves that even go up instead of down. (That's totally aside from the bandwidth and latency issues that make it sub-par vs. actual RAM).

In the case of the Gigabyte iRam card, it happened to come out near the 32 to 64 bit erra, so one of it's drivers to market was offering some extra speed since the OS couldn't even address that storage without something qwerky like PAE (which really needed new programming methodology to be useful). With the current ceiling for addressing RAM up in the TBs, this leaves them with the option of creating cheaper motherboard upgrades and/or individual RAM stick price per GB improvements to shoot for.

The reality is that people seeking to eek out some extra performance can typically get that extra performance through some combination of CPU and/or motherboard (And thus RAM) expansion. If you can't buy the performance now, then waiting a little while often see what you want materialize.

I like how the OP thinks though, it's how I think, ways to skirt limitations quickly/easily, but sadly it's just not feasible. Until they find a way to present add on cards that are nearer and dearer to CPU performance, I don't think it's an option (and even there, manufactures have no way to make individual electrons achieve the latency of on-die and short range RAM traces, without drastically shrinking the way PCs are designed).