What are the advantages of 10-bit monitors?

To support 10-bit color the following are needed:

I think the biggest factor in this is not the high fidelity output, but the possibility to more accurately match a given target color.

Especially when working in print, you want to take care that what you're seeing on screen matches the printed result to a tee. That is much harder if you only have a small amount of colors to chose from. If you have a billion colors, it's much easier to produce a match.

The Need for 10-bit Displays

Conventional display devices use 8-bits per color channel (or 24-bits per pixel) to display images and video. Although this amounts to more than 16 million colors, it still corresponds to a fraction of the colors we perceive in the real-world. This is illustrated in Figure 1, where the green triangle shows the boundaries of the sRGB color space on the CIE-xy chromaticity diagram. 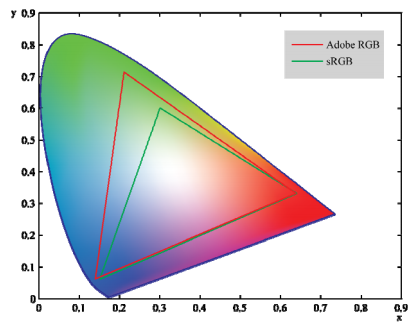 Conventional sRGB compliant 8-bits monitors can only represent the colors that lie in this triangle, while the human eye is capable of perceiving all the colors in the entire chromaticity diagram. This discrepancy is further emphasized by the fact that today’s most professional cameras and printers have a color gamut larger than that of sRGB (such as Adobe RGB shown by the red triangle in Figure 1), creating a bottleneck on the display side.

HP also brings up what they call "banding", an effect that can be seen when very similar colors are displayed close together and become too distinguishable from each other.

The Benefits of 30-bit

It might seem that a 24-bit panel, which offers 16.7 million colors, would be sufficient. For most purposes, that’s true. However, there are cases where 8-bits per sub-pixel is not enough.

Consider a grayscale image. Gray (including white and black) is produced when the three sub-pixels (red, green, and blue) are equally bright. This means that the values for the three sub-pixels are the same: 35/35/35, for example. With 8-bits per sub-pixel, gray can go from 0/0/0 (black) to 255/255/255 (white). Therefore, there are only 256 levels of gray possible.

This can lead to "banding", which is an effect that arises because the step between adjacent levels of gray is big enough for the eye to detect. It can be a problem in certain kinds of visualization, such as 3D Understanding the HP DreamColor LP2480zx’s 30-bit Panel 2 Gray banding (left, exaggerated) is eliminated by the 30-bit panel (right) rendering for automotive styling. With a 30-bit panel, there are 1024 levels of gray, and it’s almost impossible for the eye to detect the step between adjacent levels.

The basic problem is that the steps between the pixels is fixed while our eyes perceive the ratio. At the bright end of the spectrum the steps are plenty close enough, color #254 blends seamlessly with the #255 next to it and extra bits do you no good.

On the low end, though, while the steps are the same size in light intensity. The gap between #1 and #2 is huge.

Not the answer you're looking for? Browse other questions tagged display external-display or ask your own question.

1
Are there any standalone compact keyboard / monitors?
0
ProBook 4540s monitors
1
What are reasons for white areas on monitors?
0
Are these 2 monitors same?
1
Why do all of the monitors have owned seem to get dead pixels a short time after using them?