How many passes are enough with Memtest?

My computer hangs at random on multiple occasions and on different OSes today, requiring me to hit the reset button. I suspect it could be a memory problem and did a memtest with memtest86.

It went through two passes with no errors. Is that enough, or do I need to run through overnight until I see an error?

What if it is a motherboard or CPU issue? How do I know without getting a new motherboard?

Testing can not prove the absence of bugs, only their presence

Memtest is great for finding errors in RAM. The rate at which is find errors is by necessity inversely proportional to how broken the RAM is. The more broken it is the faster it finds errors.

As the your computer is crashing quite frequently and you have run a few passes, It's probably not your RAM. As a next step, you should test you hard drive and then CPU with a tool such as Ultimate Boot CD or Hiren's. (Most modern BIOS's also have a built in HDD testing feature)

I've run memtest and seen 6 passes with no errors, with 4+ errors per pass after that. I normally just run 3-4 passes, but it's certainly possible to miss errors by doing just a couple of passes. I'd imagine that some errors only pop up as the memory modules heat up, thus causing problems with memory running at a high voltage.

At work we usually left the machines running over night, but in all fairness, every time I've been able to show a memory problem with memtest it has been within seconds of starting it.

I've never seen a machine do 1 full pass to fail on one the following. (Not that it is necessarily impossible, just to show that it is rare.)

I used to work in a computer shop where we started memtest on new machines on a more or less daily basis.

Without enough info to really say so I'd still guess your problem is likelier an over heating or bad driver one.

Since you've tried more than one OS the driver part seems unlikely. Unless you've for example only tried different windows versions that use the same driver.

100% coverage represents one full pass of testing your memory. In general it is better to run multiple passes. Here are three typical lengths of testing you might use:

MemTest86 tries to do a complete test of the RAM. While doing so, it has also become a good all-around test, since some of the tests also touch upon the motherboard's memory controller and the CPU.

RAM has much increased, to the point that a portable phone may today contain more RAM than for a mainframe of 20 years ago. The tests have multiplied as MemTest86 has evolved, and so has the RAM. Although the RAM has become faster, the tests are still time-consuming, measured in hours or even days.

Now for the bad news: I have found at least two respectable sources, Ten Forums and wiki How that give the same advice. I quote from Ten Forums:

MemTest86+ needs to run for at least 8 passes to be anywhere near conclusive, anything less will not give a complete analysis of the RAM.

If you are asked to run MemTest86+ by a Ten Forums member make sure you run the full 8 passes for conclusive results. If you run less than 8 passes you will be asked to run it again.

I should remark that MemTest86 has two versions, the Free and Pro, where the Pro version has several more tests than the Free version and configuration options. You may see the differences in the article Feature Comparision.

More information about the optimal number of passes can be gleamed from the article MemTest86 Technical Information from the description of the MemTest86 config file, mt86.cfg, available only in the Pro version:

Conclusion 1: The first pass is shorter and faster, intended mostly to detect hard errors. The fact that the first pass has passed without error is encouraging, but users of the Free version need to wait for the second pass for the full gamut of tests.

The largest number of passes I have found was in this test:

Conclusion 2: Test 7 needs 32 passes to be totally complete, which I take as the upper bound on the number of passes required for a really exhaustive test.

I also remark that many of the tests use a random pattern, with a different pattern for each pass, meaning that each pass is different. Taking it to absurd heights, we might conclude that there is no upper limit to the number of passes required for an absolutely conclusive result.

My opinion as regarding the number of passes is that one should run as many passes as one has the time to wait. The lower bound seems to be two passes, as only the second one will be a full test. But the question of "how much is enough" has no real answer. I note again that for the two technical references that I cited above, the minimal number of passes required for a good and conclusive result is 8 passes (perhaps so that Test 7 will do one whole 8-bit byte, among other reasons).

On the other hand, errors found by MemTest86 should be taken very seriously. As the question was raised here about the acceptable amount of failures, my answer is that even one failure is too much and not acceptable.

I have seen RAM pass the first 6 passes of memtest and then fail subsequent passes, and when running a Linux OS with that RAM would see locking up after a 6-8 hours. Other RAM on the same motherboard ran fine, so apparently the failing RAM was temperature sensitive.

When I suspect a RAM problem (e.g. Dell computers with diagnostic lights) I run memtest on one RAM module at a time in the first slot for 8-16hrs. If it passes that confirms both that slot and RAM module are good and I can (more) confidently use that slot to test other RAM modules.

My experience with memtest86+ differs a bit from most people here. memtest86 has helped me a lot along the years but unfortunately it sometimes fails to detect errors.

Although memtest works the majority of the time, it failed me a couple of times. The first time it failed to detect errors i had a PC with 1x 4GB DDR3 that was giving me BSODs related to the memory. I ran memtest for an entire day, we're talking about 15+ passes but no errors. I then tested it on a completely different computer, same thing, no errors. Operating system was completely unstable but no errors on memtest. I then used a different software named "PC-Check" from Eurosoft which is very similar to memtest but uses different algorithms. It is also bootable, does not need any operating system. It detected errors in less than 5 minutes. I then was able to send the module to Corsair RMA and get a replacement.

So, memtest is very good but not always enough. I currently use memtest and PC-check to check memory. If memtest fails to detect errors, PC check certainly will and vice versa. And trust me, it happens more often than one would think.

Given that, after one pass, it displays Pass complete, no errors, press Esc to exit, I always assumed that's sufficient. 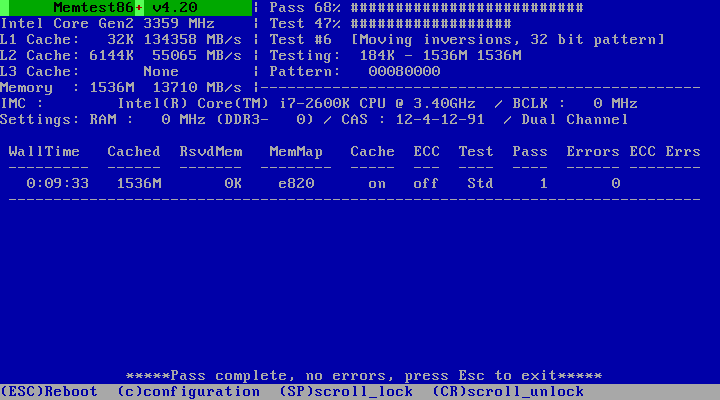 I do one pass to see if there are any obvious errors.

If there is an error no more passes needed.

If the problem with the computer is strange i let it go overnight or over day for ~10 hours just to be sure.

I usually run memtest EVERY TIME I change CPU, memory or notice odd issues. Reason is - memtest does not just test memory. It will error out in three other important cases:

1) If there are issues due to overheating of either CPU or memory. Normally, memtest loads CPU for several of the tests to almost 100%.

2) if CPU cannot access memory correctly. Most of the tests read & write at all locations of the memory.

3) if there are problems with power. I.e. a weak power supply or bad capacitors cause too many spikes offsetting random bits.

If I see at least a single red error, I start looking for what should be removed / fixed before using the hardware.

I'd say 3 passes is generally enough. If you want to be extra sure, do 8 or 9 passes, since @Jeff saw errors in one case only on his 7th or later pass, but that can take forever! So, to be more practical, perhaps just limit yourself to one 8-hr overnight run so long as at least 3 passes are achieved, or one 24-hr whole-day + night run as long as at least 3 passes are achieved.

As a general rule of thumb, I think @LAwLz got it correct here when she said (emphasis added):

@LAwLz also goes on to say there are no guarantees no matter how many passes you do:

Here is something to keep in mind though. Memtest will only prove that your RAM has issues, but it will not prove that it does not have issues (even after 10 hours of tests). Even if you run the test 100 times you can not be sure that it would not spit out an error after the 101th run.

Since I am currently waiting on a new RAM kit since my last one had a dead stick in it, I plan on running memtest on the new kit of RAM. I will be running it overnight, so that will be about 8 hours.

If you want to be as sure as practically possible, I'd say let it run overnight. If you don't get any errors after 8 hours of intense searching for errors, then it's pretty safe to say they are fine.

Not the answer you're looking for? Browse other questions tagged memtest86+ memtest or ask your own question.

4
How many passes are enough with memtest (6 years later)
59
When does memtest86+ stop?
24
Is it safe to use RAM with a damaged capacitor?
1
Please help me i dont know solution for this
1
MEMORY_MANAGEMENT BSOD - memtest86 showing no issues
0
Oracle VirtualBox - Host machine crashes when booting guest for installation
1
Find cause of BSOD
1
Non-system-disk error on Windows 7/10 restart
0
how do I identify the faulty hardware
0
BSOD several errors W10
See more linked questions

3
memtest86+ error explosion, and then nothing
67
How do I interpret the statistics of a memtest run?
17
How does Memtest86 function with bad RAM?
1
Memtest passes all 4 sticks of ram when ran solo, but not when together
4
Why are the failing addresses in Memtest86+ higher than my total memory?
0
RAM passes memtest, but creates faulty behavior
5
What to do when machine fails a Prime95 stress test?
0
How do I get memtest to see more than one core