I'm copying files from my Windows Home Server (v1) to a new Windows 8 box. So far when copying certain music and movie files the copy process has stopped to ask if I want to continue on because some properties can't be copied to the new location. 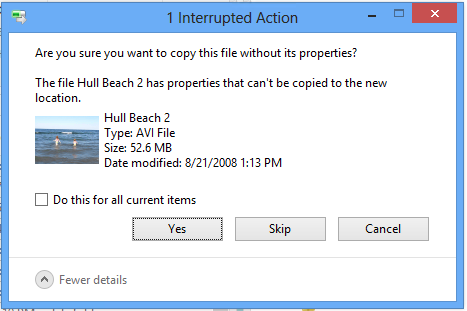 What properties can't be copied?

On NTFS, files can have more than one stream of data. Usually there's only one, the default, data stream.

Windows 2000 and XP used to use alternate streams to store additional properties which you could add in Summary tab of Properties dialog. This feature has been deprecated since Windows Vista. Yet you may still have files with such properties.

Usually it's rather safe to ignore this warning.
Anyway, in most cases, you can't use that data.

To see the list of alternate streams, you can use Streams utility. Run the following in Command Prompt:

You can see the data in the stream by using this command:

When you run an application marked as downloaded from the Internet, Windows displays a warning.

If you open the properties of streams.exe, you will see Unblock button in the Security section of the General tab. If click this button, the alternate stream will be deleted, and the above command, streams.exe streams.exe, will produce empty output.

Not the answer you're looking for? Browse other questions tagged windows-8 file-transfer or ask your own question.

11
Which properties are lost when windows says x.jpg has properties that can't be copied to the new location

0
File numbers do not match after copying
0
Robust file copy application
2
Can there be possible file corruption if I play a movie while copying files?
11
Which properties are lost when windows says x.jpg has properties that can't be copied to the new location
5
File copy program that generates checksums of the data while copying too
2
Windows 8 Permissons: Copying a File, Access Denied, Despite Take Ownership
1
Is it possible to remove the 'Are you sure you want to copy this file without its properties?'
2
In bash, how do I compare two folders to ensure they contain the same sets of files?