How can I prevent Ask.com Toolbar from being installed every time Java is updated?

As many are painfully aware of, Oracle continues to not only bundle the Java installation with the useless Internet browser toolbar from Ask.com, but also enable its installation by default. In addition to the toolbar, Ask also replaces your favourite search engine in your browser with Ask.

Furthermore, the Java installation goes as far as to actually recommend installing this useless junk, meaning that any non IT-savvy person is more than likely to leave it checked and install it (after all, it was enabled by default and the friendly Java installer did recommend it, right?).

To add insult to injury, even if you remove the Ask Toolbar, you can be sure to see it again soon, when the next Java update hits you (which seem to happen quite often lately, due to loads of security fixes for Java, but that's another story).

I'll duly remove the check-mark to install Ask Toolbar, whenever I update Java, but when supporting my family and friends, it's obvious they don't.

How can I prevent the pesky Ask.com Toolbar from being installed in the first place?

UPDATE 2016-02-21: It seems that the old registry key below is not used anymore to disable sponsors. Since Java 7u65 and 8u11 (8u40 on Mac OS X) there is a supported way to disable sponsor offers directly through the Java Control Panel. In Windows:

Since 7u55 (8u40 on Mac OS X) you can also disable sponsor offers through the command line running a Java installer with a special argument:

For those of you that still need to disable sponsors in a programmatic way, it seems that now it's enough to add the following line to C:\ProgramData\Oracle\Java\java.settings.cfg (create a new file if it doesn't exist).

Please note that this last method is undocumented and unsupported, just like the old one!

Open the following keys into the Windows Registry Editor (regedit.exe):

and create in both of them a new String Value (type REG_SZ) named SPONSORS of value DISABLE (both name and value must be uppercase).

Alternatively, copy and paste the following code into a text file called disable_java_sponsors.reg and double click on it to import these values in your Registry.

Please note that this switch not only disables the Ask.com toolbar installation and prompt, but disables all of the sponsors potentially bundled with the Auto-update setup/Online setup (Google toolbar, Yahoo toolbar, McAfee something, etc...)

Another way, without having to download and rename or create a new .REG file, is to copy and paste the following two lines into an elevated CMD prompt:

Edit 2014-02-02: With JavaRE 7u51, Ask toolbar now installs into a subfolder named "AskPartnerNetwork" instead of "Ask.com". One could have suspicions about what the point of that is... Meanwhile, @Danilo Roascio's registry values are still obeyed and works just as well as before.

This just highlights that the simple registry fix, is still the simplest and best solution. In case the Java installer changes, so that this registry value is ignored, the following script can still be used as a workaround - just make sure the Ask Toolbar path is updated.

The simplest way to prevent Ask Toolbar from being installed again I could think of, was to create the folder Ask Toolbar installs into and modify the permissions, so no one can write to it.

First, make sure that the Ask Toolbar has been removed. Then copy the following code to Notepad, save it as a .cmd file and run it in an elevated command prompt:

Please note: ICACLS is included in Windows Vista and later. You can download ICACLS for Windows XP/Server 2003 through Microsoft KB919240, or an updated version through KB943043 (but the latter must first be requested, after which you will receive a link by e-mail to download it). For this purpose, both versions should work equally well.

I have verified with the installer for Java 1.7 update 13, that the Ask Toolbar indeed does not install, even if I leave the checkbox checked.

A similar approach can most likely be used to block most other kinds of piggybacking crapware.

The script has been updated to add a 'read me' text file and a script for removing the restriction again. Both are stored in the 32-bit program files folder.

Consider using https://ninite.com/ Select all the apps you want it to install/update, and with a single click it'll install only those apps, w/o extra garbage like Ask toolbar in java. If a system already has the latest version of a given app, Ninite will skip that install. Also you don't need to regenerate its package every time. The same .exe will ensure that you always install the latest versions. Just tell your friends/family to run it once a month and it'll make sure they are always up to date.

Update: Alternatively, if you install JRE from http://www.oracle.com/technetwork/java/javase/downloads/index.html it does not come with Ask or McAfee toolbars. (Not sure about auto-update afterwards).

Another method is to prevent DNS resolution of the ask.com domain. I tested this by setting my network's DNS cache/resolver (Unbound) to refuse queries for ask.com and then updating java with the ask toolbar box checked. Result was no installation.

This method has the drawback (if you consider it such) that the ask.com domain will be unavailable. But it has the bonus that ask.com "infected" systems may be discovered (as users may have search issues) allowing for disinfection to be undertaken.

Another positive is that no changes are needed for each computer. The DNS solution works for all systems immediately and simultaneously. Note that other DNS caches must be blocked - which is quite typical in most controlled environments - the firewall prevents access via port 53 to outside DNS from all but the internal DNS cache/resolver.

Nov 2014: Answers here are largely outdated as Oracle has now disclosed this. Or at least we can say there's now an "official" solution.

Ok, let's focus on the Consumer version of the Java installer.

Nowadays the Java widget on the Windows Control Panel has an option to permanently disable the "prompts" where you are asked about Ask and where you previously had to remember to unselect the option. 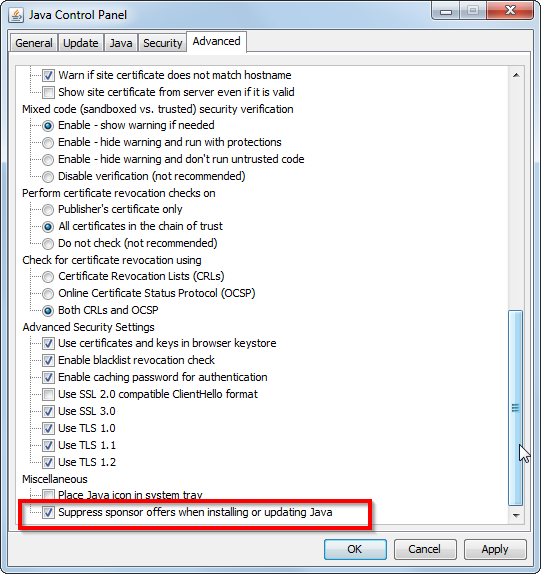 You'll only have to do this once and then never again. I still would have liked Oracle to remove it altogether from the Consumer version of Java but this solution at least means you only have to say "no" once.

For those of you interested- I created administrative templates (one for x86 and one for x64) that can be used for Group Policy. They've been tested and work in XP and Windows 7.

Save the following file as templatenamex86.adm and import in Group Policy:

Save the following file as templatenamex64.adm and import in Group Policy: 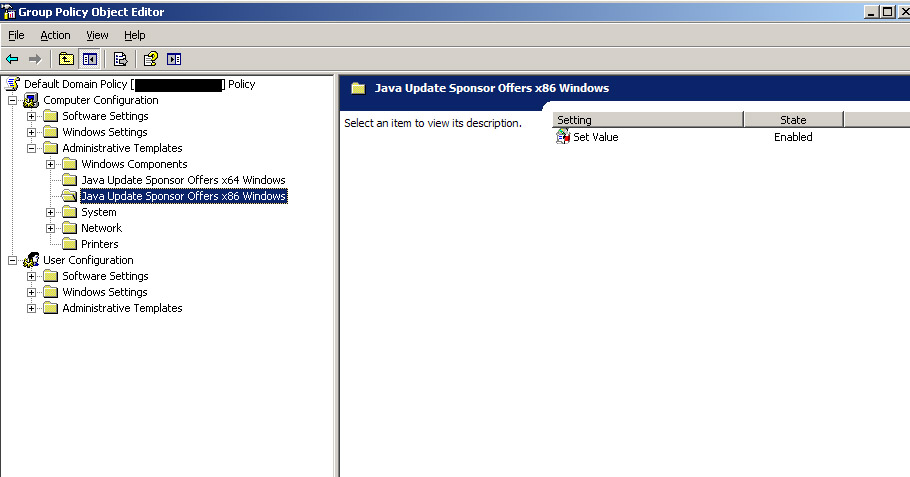 I hope this information can help others keep this garbage off their networks too!

This was mentioned in the comments, but not clearly explained in any of the answers:

The offline Windows installer for Java doesn't prompt to install the Ask Toolbar. The link to the installer for the Java SE JRE (if you don't know what SE or JRE means, then this is what you want) is currently at:

The Windows offline installer for x86 (i.e. 32-bit software, includes most browsers) is clearly marked. The 64-bit installer seems to be offline-only.

The javaruntime package on Chocolatey appears to avoid installing the Ask toolbar. I've been running that package and, unfortunately, the auto updater, and have not seen the Ask toolbar installed after an update from this initial source. I suspect the java updater adheres to the original installation parameters.

FYI, Chocolatey is a command-line Windows application/package manager, like apt-get for Linux.

Not the answer you're looking for? Browse other questions tagged java toolbar bloatware software-bundling or ask your own question.

2
Is it possible to block Ask toolbar and McAfee from installing during Java and Acrobat updates?
0
How can I prevent Ask Toolbar and Ask Toolbar Updater from installing when jucheck installs an update?
2
Is the Ask.com toolbar installed with Java considered spyware?
0
Is there a way to blacklist programs so that they can't be installed?

2
How do I remove the ask.com toolbar?
42
Can I permanently prevent Java security updates from installing Yahoo Toolbar?
2
How to get along with Java updates (Windows)
4
Java 7 update 6 installation fails on Windows 7 when Chrome is default browser
1
how to prevent a java process from being killed by killall java -9
6
How can I prevent McAfee Security Scan from being installed, bundled with other apps?