I have been running 2x2GB of Corsair Dominator 1600 dual channel sticks on a ASUS P8P67 motherboard.

Was intending on buying the same again, so I could run all four sticks on the mobo. instead I accidentally ordered the 2x4GB Corsair Dominator 1600 kit.

I swapped the current 2x2GB with the two new 2x4GB (black slots on mobo). This appears fine in BIOS and in System (running Windows 8).

I then put the 2x2GB sticks back into the blue slots on the mobo.
BIOS still only registers 8GB, and so does System.

However, CPU-Z is reporting the expected 12GB. 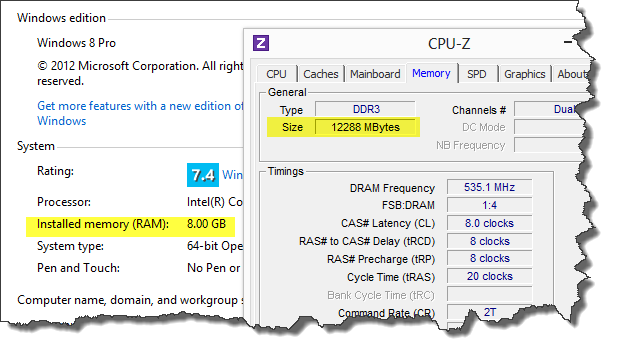 Whats the deal here? Is there an approach to troubleshoot, or is it that even though the kits are same speed/brand, they wont work in conjunction.

The answer I am looking for is either a workaround for my machine to support (and use) the current configuration of 2x2GB + 2x4GB, or for the answer to be that it is not possible.

Let me know if you need me to include more info via the comments.

The manual on 2-6 says "You can install 1GB 2GB and 4GB.." no mention of 8GB in that line. But in smaller writing on that page it says "According to Intel Spec, The max. 32GB memory capacity can be supported with DIMMS of 8GB (or above)". and on Page x it "repeats" that line about Intel stating 32GB is supported.

The most probable explanation is that your CPU is not properly seated and it's causing the BIOS to detect the memory in the blue slots but not use it. Modern CPUs have the memory controller on the CPU die, and many of the CPU pins are the memory channel address and data lines.

Test by putting just two modules in the blue slots. If the system doesn't work, this is the most likely explanation. While you're at it, check for any physical damage to the memory slots or any debris in them.

If you confirm that the blue sockets are not working, carefully remove the heatsink and fan, remove the CPU and carefully inspect the pins in the socket. Look for any foreign material on the CPU or pins or for anything bent. If you find anything, fix it. Either way, carefully reseat the CPU, remount the heatsink/fan with new heatsink compound, and re-test.

Have you referred to the motherboard manual on how to mount the DIMMs? I have the same motherboard, and on the manual (page 2-6) I read

You may install varying memory sizes in Channel A and Channel B. The system maps the total size of the lower-sized channel for the dual-channel configuration. Any excess memory from the higher-sized channel is then mapped for single-channel operation.

I can't tell if they mean that only one DIMM on the higher-sized channel is mapped, which probably is what you are experiencing. You can try switching the channels, but I guess it won't fix the problem.

As for CPU-Z readings, they differ from the system because CPU-Z only reads the SPD information from the RAM modules, while the system shows the memory that is actually mapped by the memory controller.

You may install varying memory sizes in Channel A and Channel B. The system maps the total size of the lower-sized channel for the dual-channel configuration. Any excess memory from the higher-sized channel is then mapped for single-channel operation.

As I understand it, that means you need to install

Then the lower 8GB will be in Dual-Channel Mode, whereas the upper 4GB will operate in Single-channel mode (as channel B only consists of the 2GB modules). Doing this will mean that the specs (MHz, timings) of the 4GB and the 2GB modules should ideally match.

And to explain CPU-z: it only displays the installed memory size, i.e. it adds up the sizes of all memory modules, but due to the wrong configuration you run at the moment, the motherboard can't use the whole capacity (you have one 2GB and one 4GB module on different channels, hence the motherboard reduces the usable size to the smaller of both).

1
Single DIMM for dual channel motherboard?
5
8GB RAM modules on Asus Sabertooth 990fx
1
On a 12GB system, I replaced 2x2GB with 1x4GB (3 slots filled) and now I have 8GB instead of 12GB
2
Upgrade memory from 4GB to 16Gb, but Hardware Reserved memory got 8GB
1
New pc not booting with 2 RAM sticks (only works with one)
0
CPU-Z, Bios and Windows all recognize other memory
0
Why memory slots 3 and 4 won't work simultaneously?
2
BIOS / Mobo won't detect anything beyond 8GB RAM
3
Suddenly only 8GB out of 12GB RAM used, despite Memtest86 enumerating all DIMMS when running Proxmox VE 5.2