Looking up (text)values in Excel array

I was searching around on internet and playing around in Excel 2010, but could'nt really find an answer.

For the sake of cleanliness I made an abstract, but the real file is a lot bigger. 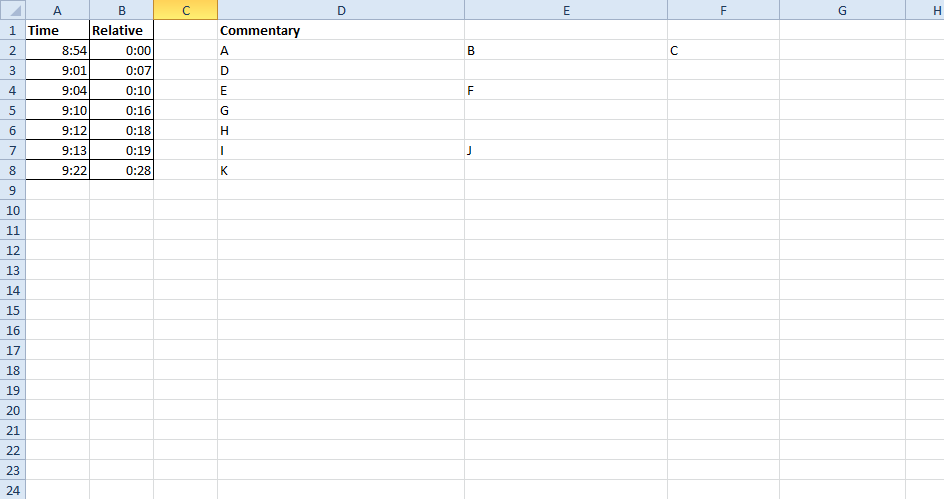 In another sheet I want to look up text A and get the output of the relative time (Column B). However, if row 2 extends up to Column Z (or even more) I want all the output times return the same value, as visible for A, B and C in the picture below. 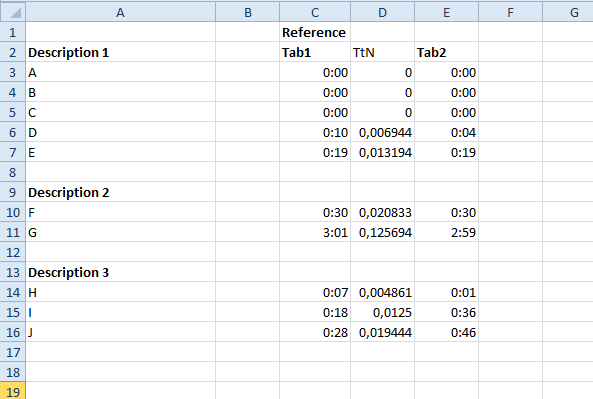 Column D will probably be gone/hidden when I fix the conditional formatting. It's also possible that 'K' comes before 'H' though, so the values may not be in order (as visible for F, G and H

This is the first problem. I tried solving it with INDEX-MATCH, but for an unknown number of rows and columns that's pretty tedious. There are also many blanks, so I need to build safes for that too.

The formula for only 6 columns would look like this:

The main question for me is: is it possible to do it an easier way in Excel, or is there a way doing it with VBA. I'm not really 'good' with VBA so I would really need help with that then.

You can do this relatively simply with an "array formula" without adding any columns, e.g. for a range up to column Z

If there is no match then you get zero, if you want a blank instead, to distinguish between legitimate zero values you can use SMALL with IFERROR, i.e.

Here's an approach that uses some VBA to simplify the lookup without any helper cells.

The VBA part is this user-defined function (commonly referred to as a UDF) that serves the same purpose as the MATCH function you were trying to use to find the row in which the text is found:

What makes this useful is that the VBA FIND function, unlike the worksheet MATCH function, can search through a range than spans several columns and rows. Like MATCH, this VBA function returns the row within the search range that a specified value is found and returns a #VALUE! error if it cannot find the value.

On the second sheet, you will use INDEX in combination with FindRow to look up the time, for example,

with the second argument to FindRow set to the range that contains the Commentary values. While I've shown the search range extending to column Z and row 9, FindRow can handle ranges of any size.

To install the VBA function, first select "Visual Basic" from the Developer tab on the ribbon. Select the workbook name in the Project pane at the upper left (the workbook will be designated as "VBAProject(YourSheetName)" and Insert a Module using the menu bar at top. Finally, paste the function code into the large code pane that appears on the right.

I used column C in your first sheet as temporary column:

1
In Excel I need to find data matches between two arrays - one horizontal and one vertical
0
Need simple macro for “match” formula
0
Nesting multiple IFERRORS with Index and Match
0
Excel 2010 Formula: Finding a dynamic column based on string value, then count # of “0's” within that column
1
VBA; Fill down last line of an array to match the length of an adjacent column
0
How can I get the unique values present in a column for each set of identical values in another column?
0
Excel VBA index match a csv import
0
How to convert an excel formula index match searching into macro vba code