reorder sectors on a block device?

I'm considering backing up some data to DVDs/BDs. (I know about DVDisaster.) I've read somewhere that the outer sectors on a DVD are more likely to wear down than the inner ones. This suggests that over time, the blocks in the second half of an image are more likely to be corrupted than those in the first half. So my question is, is there a way to write the same data to 2 DVD images, such that

If I'm not being clear, here is what a possible solution could be.

Suppose for a second there existed a linux driver that could mount an iso image backwards. So, I give it an iso file, and when it wants the 1st sector, it reads the last 2048 bytes of the file backwards, instead of the first 2048 bytes in normal order. I don't know if such a driver exists, but if it did, it would be one solution to my problem because I could do this: put my data in an iso image; compute a second image as the first one backwards; encapsulate each image into a simple UDF filesystem with only one file; write the two UDF filesystems to different DVDs. Now, when I plug in either DVD, I could just mount the single iso file to get back my data. Furthermore, the data would be written to the 2 DVDs in different ways, so if both DVDs each lose the last 1/3 of their sectors, I could still retrieve it all (by hand, but it would be possible).

Other possible solutions would be a general driver to permute/rotate/reorder arbitrary-size blocks in an arbitrary block device. Or perhaps, is there a way to store a file in a UDF file system using a specific order of sectors? Given that UDF is a full-fledged file system, that is definitely possible, but is there a tool to do it?

Edit: As I explained under the first reply, I don't mean to replace DVDisaster, but to complement it. Consider 2 strategies for backing up 4G of data. Strategy A: use 2 identical DVDs, each with 15% ecc from DVDisaster. Strategy B: use 2 DVDs, each with 15% ecc, but with the additional permutation thing I mention above (on 1 of the 2 DVDs). I claim that because of the wear patterns of DVDs (specifically, the correlation of errors), after a certain time, the probability of full recovery from B is significantly larger than from A (all other things being equal).

Edit2: To substantiate my claim that DVDisaster isn't a cure for everything, here is a script demonstrating how DVDisaster with 33% ECC data suffers data loss with only 1.3% corruption. The apparent contradiction is that 33% only applies to the "best case" corruption, not to "any" corruption. FYI, I'm creating a file spanning the entire filesystem in test.1.udf, changing only the last sector in the file to zero in test.2.udf, computing ecc data for both, and comparing the sectors, including the ecc data. The point is that if test.1.udf is your data and you lose the sectors that are different and only those, you cannot possibly recover test.1.udf because test.2.udf is another possibility.

The problem you are describing already has a more elegant and efficient solution: Reed-Solomon Error correction. This works by inserting error correcting code at the end of the disk, such that you can lose a certain amount of the data from arbitrary locations on the single disk and still recover the whole file.

This is possible because the RS decoder does not differentiate between user data and error correction data. In the view of the RS decoder each block is a sequence of 100 bytes from which an arbitrary subset of 20 bytes can be recovered.

While some parts of the disk may be more likely to lose data, data loss can still occur in any location. In the two disk method described, you will lose data if any two failed sectors overlap. At the higher levels of data loss, this would be fairly common. In comparison, Reed-Solomon Error correction allows you to recover from losing 14.3% (normal mode) or 33.5% (high mode) of the disk without issues.

DVDisaster is designed to do just this and is perfectly capable of meeting your needs here. If you are felling particularly paranoid, you can set the redundancy to High (or custom) and still use less space and have higher reliability then you would with two disks. 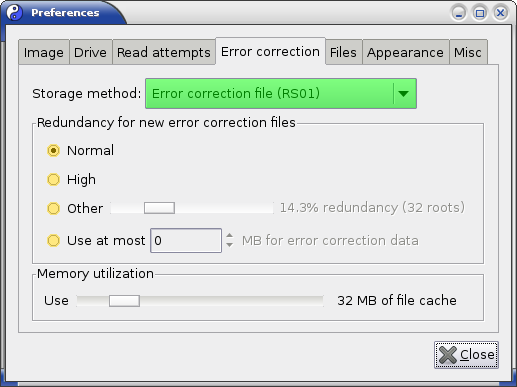 Not the answer you're looking for? Browse other questions tagged backup filesystems dvd iso-image udf or ask your own question.

1
Optical drive failing to mount, yet can be read from
5
When using `dvdbackup`, is it true that 64GB DVDs exist?
38
How to make a multiboot CD that will start a user-chosen ISO file
4
Reproducing limited DVD copy protection
2
when archiving on DVD, should i make a mirror copy similar to RAID 1?
9
How to copy a DVD with a patched UDF filesystem / bad sectors?
7
What is the preferrable way to archive a private DVD collection?
1
Writing to a UDF WORM SD card in Linux