I've configured an IMAP account in Outlook 2013 which, at first, behaves just fine. It syncs the inbox and fetches about 2mb of messages. New messages arrive promptly in the inbox, all seems well.

But after, say, 10 minutes, the synchronization goes crazy. Outlook pegs one CPU core at 100% and the "Sync Issues" folder starts filling with synchronization messages, a new one every second (right on the second) like thus:

Every now and then it throws in an error: 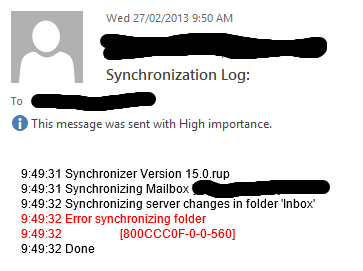 I'd previously used POP3 for this account on Outlook 2010 without issue, but want to switch to IMAP since I'm using IMAP (without issue) for the same inbox on my iPhone.

I've queried my service provided if they're aware of any compatibility issues with their IMAP service, and the response has basically been "Don't use Outlook 2013 yet, it stinks".

I see various other reports of the same issue dating back to pre-release days with responses like "it's pre-release, sit tight". Well it's been RTM for almost a month now, does anybody know what's going on? Is it a recognised bug? A server incompatibility? Is there any known client-side work-around? (After-all it works without issue for the first 10-20 minutes).

I have seen this before at work and the solution we found to work for us was to load Outlook in Safe Mode and the problem "went away". The only issue is it did not address the problem.

Open the Command Prompt and type whichever command suits the version of Windows you have installed:

Ensure your copy and paste the entire line, including the " around the file name. You do not need to change to the directory, it will either run or it won't.

If you are unsure of which version of Windows you have, try the second one, then the first one (most new computers are 64-bit installations of Windows).

If this works for you, then create a shortcut and put it where you want with the target as the command is copied from above.

This error is caused by a misdirected rootdirectory for the IMAP mailbox. Set the mailbox root (in outlook settings) to 'inbox' (in most cases, but check the real name of the inbox via the webmail service of that account) and the error is history.

Not the answer you're looking for? Browse other questions tagged crash imap microsoft-outlook-2013 memory-leaks or ask your own question.

6
Outlook 2013 keeps freezing, semi-consistently
2
Sync issues with IMAP and Outlook 2013
0
Outlook 2013 Inbox synchronizes but does not download email
1
Crash when moving mails from Outlook.com to IMAP