How to type characters for phonetic guide over a word in Microsoft Word?

I am trying to prepare a small document in Sanskrit language. The text that I am trying to type are very well available with my Windows 8 OS and I could type them fairly well.

However, my requirement is that I am preparing this document as a guide to read and as well as pronounce correctly. The pronunciation symbols followed are as ancient as the language and are similar to the IPA.

To put all my need in English, assume I want to type something like this:

The numbers, alphabets, symbols that is seen in the first line with small font size are phonetic guide and the text "Sample" in the second line is the actual text.

I have no problem in typing the second line. But it is time consuming for me to type and place the characters in the first line using text box as this is the only way I figured to achieve the result. As it can been seen this is very tedious and more importantly all those efforts goes waste if the second line is edited.

So, my question: Is there any easy way for me accomplish the above at the same time allow me to edit the text in both lines?

A sample (and actual) text that I am trying to type is:

The second line is a word that has to be hymned with specified octave on first, last but one and last alphabet. The octave is mentioned as numerals in the first line (reading 1, 0 and 3 from left to right). 0th octave is the highest not silence ;)

I am not expecting the word processor to do any automation nor I do not want any macro support as well. After posting this question I stumbled on field code for equation and it would be easy if I can do something like with equation editor by invoking it with field code { EQ \f(1,S) }.

I guess there is no easy way. Does other publishing tools like Pagemaker does have any tricks on its sleeve?

You're doing it completely wrong. Fractions are exactly for what they're named: showing fractions, with a line in between at the baseline

I guess there is no easy way. Does other publishing tools like Pagemaker does have any tricks on its sleeve?

There are ways to achieve that in any decent editing tools, for example MS Office, Libre Office, Hancom Office... and of course even TeX. In fact you'd find the answer immediately if you've googled something like "MS Word phonetic guide"

Even html supports it with the <ruby> tag and CSS also has the Ruby Styling Module. The tag is meant for Ruby character which are commonly used in East Asian texts for phonetic guides but of course it can be used for any languages. The linked wikipedia article also uses <ruby> tag (just look at the page source) so you can see the examples clearly in your browser

The ruby characters appears above the base word, and can be adjust to lie on top of a single letter or a group of letters easily. Unfortunately superuser's simple html doesn't support ruby tag, but many other language stackexchange communities like Japanese have special ways to write it in markdown as explained here 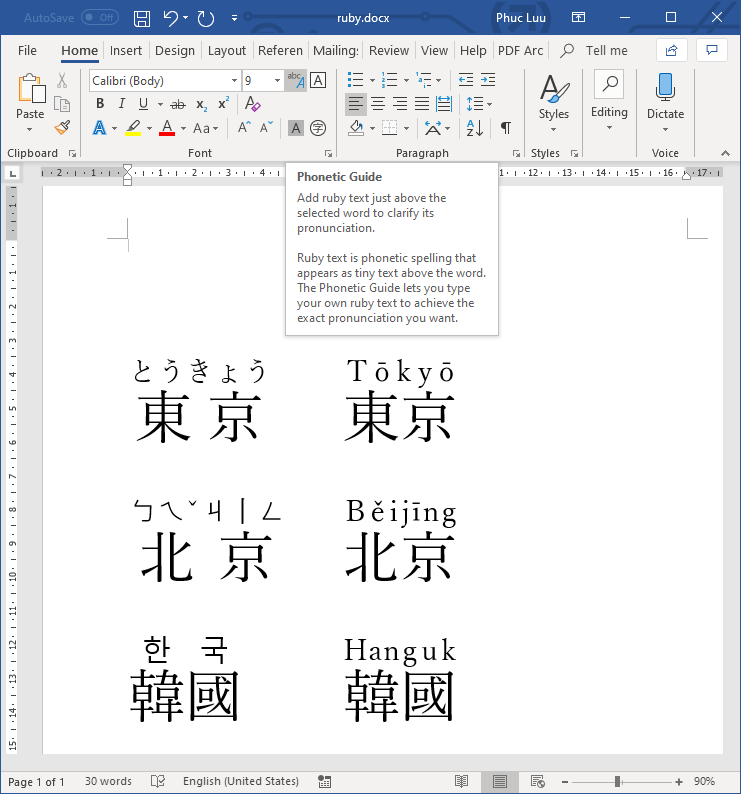 The feature is generally available for East Asian languages, so if it doesn't appear on your ribbon then just right click on the ribbon > Customize the Ribbon... and add the "Phonetic guide" button to the Home > Font group, or you can add one East Asian language to the preferences list 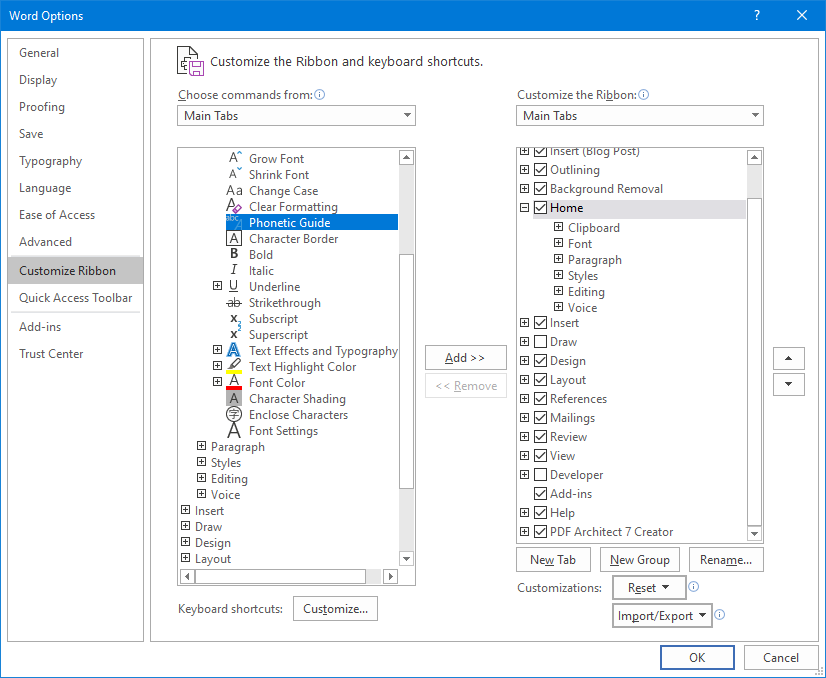 The ruby text is also represented as an equation field code. If you press Alt+F9 or go to Preferences > View and check Show > "Field code" (or right click on the annotated text > Toogle Field Codes) you'll see it's encoded as something like

Here jc is the ruby style, for example jc5 is a vertical ruby text, hps is the font size of the ruby text (48pt in this case) and 47 after \up is the distance to move above. However most of the parameters are optional except the vertical distance. So the minimum you can have is like this

Just press Ctrl+F9, paste the code, adjust the distance and then Alt+F9

You could potentially use a table with the column width set to autosize. Put one character in each column. Not sure you can make it work, and still tedious, though less so.

Otherwise you'd need some sort of tool that could read the font metrics of the second line and space the first line accordingly. I have no idea how you'd go about this, though. Likely some external process would be more likely to succeed than doing it inside Word.

Seems like you have a solution but in case you find it easier you could try creating a number of tabs in Word (probably centre tabs) at intervals suitable to your larger font (and if you wish adjust the spacing per letter):

(which looks like this on screen with tabs etc. visible)

To make life easier you can select the area of the document you are working in and Use Paragraph/Tabs to remove the existing tabs and set default tabs to a centre tabs at a suitable interval for your font size - 0.7cm maybe - and then just type away but with a tab betweeb each letter.

So far as I know this works for any inline content in MS Word based on the measure of width used by the software including words or whole sentences including punctuation and symbols, ligatures, arbitrary condensation and overlaps, equations and images. Obviously there has to be enough space between tabs to fit the content.

I don't have direct knowledge of whether there are specific issues with Sanskrit fonts to overcome.

For example (apologies if I have butchered the Sanksrit that I googled!):

The biggest challenge is getting it into other programmes that don't have Word's sophisticated type setting. You can save it as PDF and copy out as a bitmap (which is how I got it into this post) but vector-based files such as WMF and EMF formats lack the type-setting capability to render it properly. It should print OK though

Indeed you can take this a long way:

For example, sentences, images, equations, and spacing-shifted characters (the actual text is [g˜] but the space between the g and the tilde has been kerned away.

As I said, perhaps it is messing up Sanskrit in some way I don't understand but basically anything Word can produce inline it can centre over a tab.

Try this method if it works for you.

Let me know if it not meets your requirement.

I find the answer of @phuclv very useful. But the result would be center-aligned. A few tweak in the field codes can change that :

\a to create an array, \al for left-centering, \co1 to make one-column array

This field code could also allow you to add multiples lines

Please describe your purpose better. Do you want that, when you write the second line, the first line is written automatically? I mean, over every "S" charactare place a "1", over every "a" place a "#" and so on? Or what you want is a way to have the phonetic symbols placed over the other characters with the correct spacing?

The second can be achieved without the textbox by defining two styles, one style A for the phonetics and one style B for the text. The key is to play with the letter spacing of the two styles to achieve a 1:1 correspondence (the setting is found in the Character dialog, in the advanced tab) You can then create a table with invisible borders and apply the two styles alternately to the rows.

You can also consider using a more professional typesetting system such as LaTeX (free and opensource). I don't know if it supports Sanskrit and how you can achieve your purpose, but you can ask for help in the TeX Stackexchange group

Not the answer you're looking for? Browse other questions tagged microsoft-word text-formatting or ask your own question.

0
How can I adjust the ruby text height?
0
How to type characters for phonetic guide over a word in a plain text file?

0
How to lock indents in Word for reference page
3
Adding a punctuation mark (comma, period) after a Word 2013 equation in display style
0
Microsoft Word wildcards
1
Streamlining formatting in large document that has been modified by several versions of Word
1
How to replace formatting of “0 or more characters” (*) wildcard in MS Word?
0
Turn math autocorrect back on in Microsoft Word for Mac 2011
0
Unusual horizontal lines in a Word document — not underline, border or Shape. What are they?
1
Microsoft Word 2013 ignores language setting for footnotes
0
Microsoft Word (Office 365, Windows Stand-alone edition) automatically changes font when I switch keyboard layouts. How do I disable this?
0
How can I adjust the ruby text height?