Since the internet connection in our house does break down from time to time I set up a little experiment:

For the last two month, one of my machines is pinging google.com on an half-hourly basis. One measurement consists of 50 pings.

I now calculated the mean percentage of packets lost for each hour of the day: 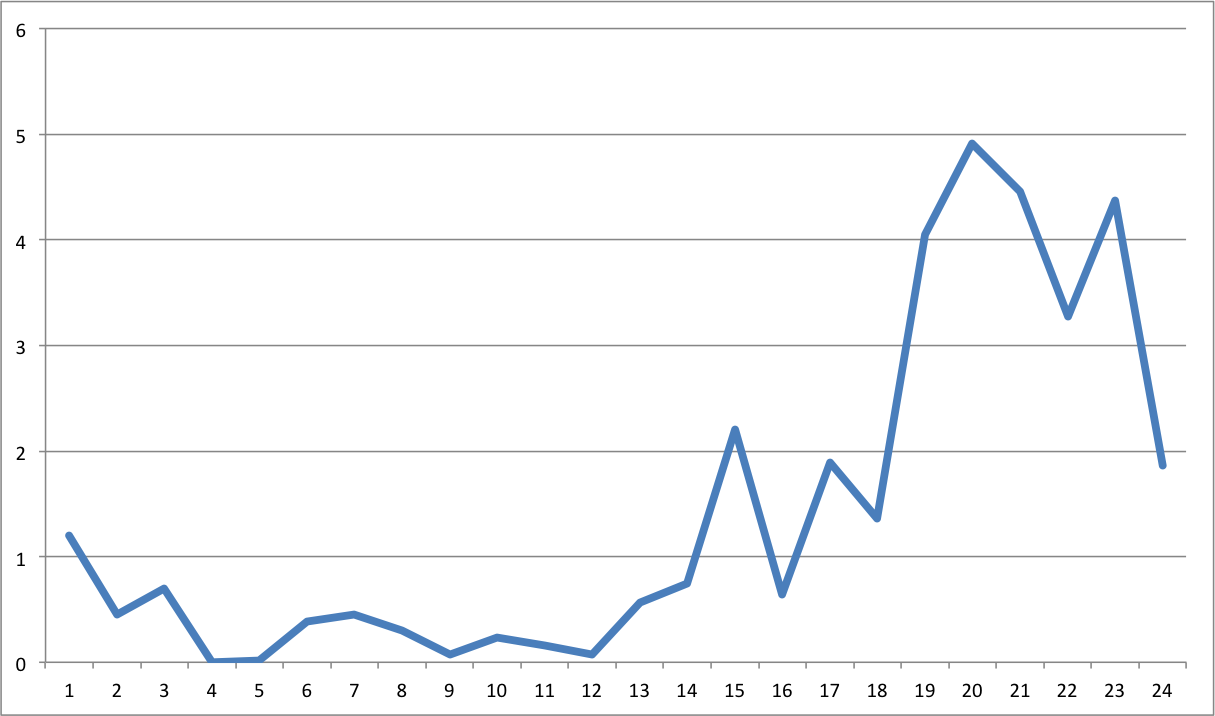 Edit: I forgot to mention that the machine is directly connected to the router (no WiFi). And the router is pinged as well, with no packet loss at all.

Unfortunately you really have not provided enough information to work out where the problem is. To answer as best as I possibly can with the limited information provided:

It looks like your latency increases in the afternoons - which means the first places I would be looking are if the problem is WIFI when everyone around me is using it. After ruling that out I'd start questioning my ISP about oversubscribing the connection.

This more than likely is a result of congestion somewhere along the line. It could be your router but more likely an upstream provider.

You don't state how you're doing the 50 pings e.g. what time interval, are you waiting for one to fail/succeed before the next or firing 50 off all at once (flood pinging).

Such a loss during periods of high congestion is not unusual in my experience. It can be down to lower prioritisation for ICMP traffic but more likely is happening for the same percentage of all connections - it's just TCP will gracefully resend and reorder packets so you are less likely to notice.

To gain a better picture of the situation I would suggest you implement the following:

This is typical of most residential ISP accounts. You're seeing a peak due to network congestion as people get home after work, then go on-line for the whole evening. This sort of evening peak is especially pronounced in high-tech communities with lots of on-line gamers (like where I live, here in Redmond, home of Microsoft.)

Not the answer you're looking for? Browse other questions tagged internet-connection ping or ask your own question.

5
Internet connection speed slow, high ping, low bandwidth, what can be causing it?
21
Why can I ping google.com, but not nasa.gov?
0
Home Network Router Used as Gateway Develops High Latency
2
Ping test for 4 hours
0
Local addresses unreachable, remote addresses work
1
I can access websites through the web browser, but I can not ping them or interact in various other ways
0
ping google.com not sending any response