I am assuming this is because of some apple's flag in the recorded video which Windows systems are not able to read. Can I record videos in some way so they don't get rotated on Windows systems? Or is there any way I can re-encode videos with proper interface orientation using FFmpeg?

I am open to both FFmpeg or iOS way.

You can't change the way the iOS camera records video. It sets a rotation flag, and if you want the video to be shown correctly in both OS X and Windows (and other players), you'll have to:

Download ffmpeg (a static build for your OS is fine).

You then need the transpose filter, e.g.

Open your video in there and choose:

and finally File > Save the new rotated video. 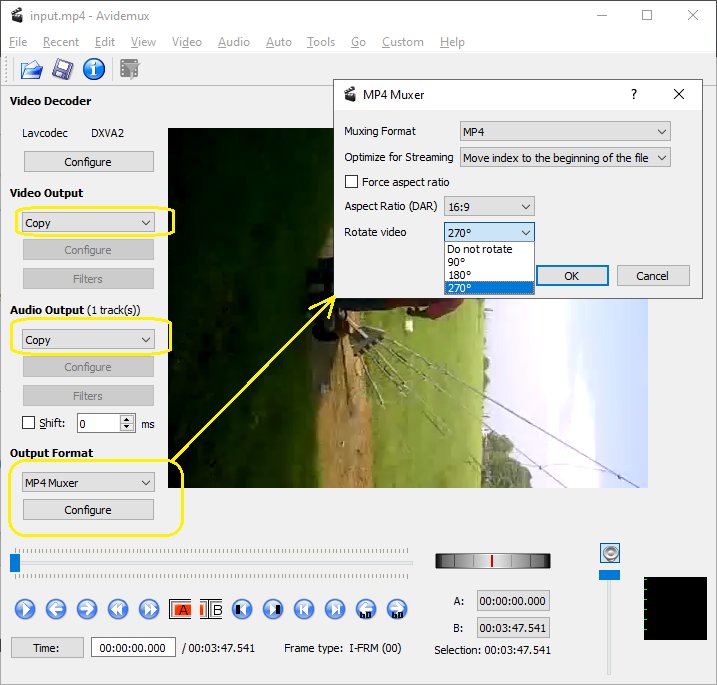 Often phones record videos rotated, but then add some rotational metadata for media players to read to then rotate them for viewing.

ffplay has an option -autorotate or -noautorotate https://ffmpeg.org/ffplay.html So with that you can see clearly the difference.

the command's ffmpeg and mediainfo (which can be installed on windows), can show rotational metadata.

So any video that shows up rotated (by a media player that disregards rotational metadata), will be fixed. So that all media players will play it with the correct orientation.

It really is as simple as that..

So you can copy all the videos off your "phone" into some directory, then make a directory within that called e.g. "a", then do for %f in (*.mp4) do @echo ffmpeg -i -acodec libmp3lame -vcodec libx264 a\%f And then without that subdirectory called "a", ffmpeg will put all the mp4 files fixed for you!

Not the answer you're looking for? Browse other questions tagged iphone ios video ffmpeg or ask your own question.

5
Lossless rotation of video (MPG, MP4)?
94
How to rotate a video 180° with FFmpeg?
19
Change rotation flag in MP4 video (without losing metadata)
0
Video orientation flag reset or disabling it on youtube

1
Rotate MP4 video using ffmpeg
1
Youtube don't like some videos
1
Screen recording has audio "stripped" when compressed or shared
0
How can I grab with ffmpeg only if there is a change in the input?
0
How do I scale a video with ffmpeg based on the long dimension?