How can I troubleshoot a powerline (homeplug) and switch connection?

Due to living in a multistory house, we use powerline (homeplug) adapters, which in principle works fine. We have several restrictions though:

For these reasons (being on the 2nd/3rd floor with multiple devices), I am forced to connect the (Auto-MDI/MDIX -activated) gigabit switch (TP-Link "TL-SG1005D") to what is probably internally configurated as "outlet" or "agent" by the powerline (devolo "dLAN® 200 AVsmart+") software? Result: It doesn't work.

I wouldn't have to care about all this if I'd use a desktop PC, but: 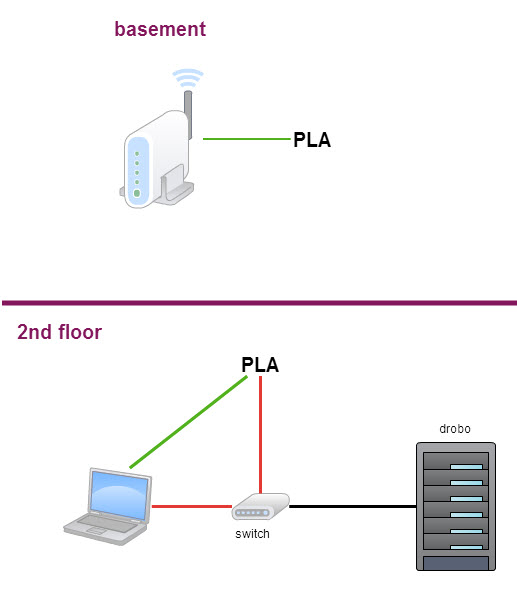 Troubleshooting/solutions that I tried (unsuccessfully):

Bonus question: If I'd alternatively connect my drobo NAS to a - spare - (W)LAN powerline adapter, could other people in the same house (i.e. people that use the same router-connection via powerline!) connect to its contents via the powerline LAN or WLAN as I myself plan to do? Normally people worry about neighbors (which is no problem), but in my case I (have to) worry about the people inside our network.

I've had a mixed homeplug network consisting of a 500mbps/4 port gig-e switch and a pair of 200 mbps non passthrough adaptors. Its reasonably similar to yours I've found a few things troubleshooting it. You can see a somewhat stripped down network diagram in my answer here

Firstly that not all adaptors in the network behave identically - the gig-e switch is significantly more sensitive to noise (though I have no idea to whether this is due to it being in a mixed network, or inherently sensitive to noise). While useless in most cases if the signal lights report worse than perfect signal, you're probably alright on the power line side of things. Oddly I found its more likely something is wrong with your devices report a perfect signal, but you have connection issues.

As for noise, the only real way to work this out is to go on walkabout - my switch goes down whenever one of our washing machines run (the 200 mbps gear has signal degradation). The troubleshooting methods available on homeplug gear is rather useless - in my case the switch reports perfect signal (Its usually red or amber) when it isn't working, and occationally blinks. I started by switching off all other devices in my room, ruled out any changes in the next room and the next when the networking was glitching, and worked my way through the apartment. Focusing on devices with big motors like Fridges and washing machines is a good idea. You can probably add a filter, but I haven't found one for my local plug type. Some people actually use passthrough homeplugs for the same thing, but it seems wasteful. I ended up fixing this issue by moving the homeplug connection further from the devices that gave me issues, and I have had no issues since.

I'd also 'check' to make sure all the homeplugs are on the same private network name - they generally tend to be set to HomeplugAV, but changing it would be a good idea. You can set it with magic everything button Homeplug units have, or use a utility provided by the company that makes them (which tend to not actually tell you what the current network name is, or actually provide any sort of feedback whatsoever). In theory you can also detect what devices are on the network, but practically this works rarely enough (even when I'm on the network, and connected properly) that its pointless.

In your case it was something else, but I'd like to put this out there since anyone looking for my problem or something similar

You can use HomePlug Monitor to get detailed information about your HomePlug line. 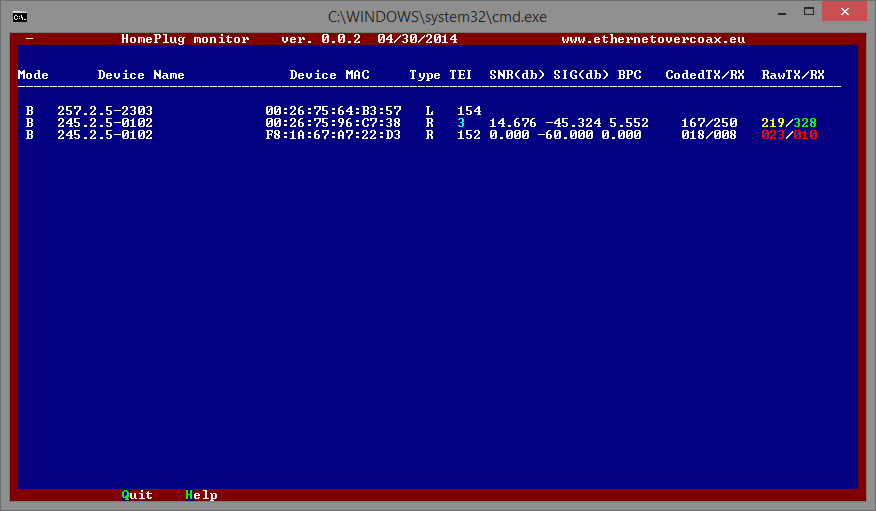 It gives you information like connection quality (through signal to noise ratio and bit per carrier values, RX/TX values and raw rx/tx which the standard management applications do not provide.

Ok, I found my mistake: I had my drobo NAS set to a fixed IP. Letting it receive a DHCP IP solved it.

I had to wait 5-10 minutes though, until all devices got used to the new, proper state.

(Until then, even after my change, both www and my other device didn't yet work concurrently.)

Another two steps I initially forgot to test:

a. Exchanging the devices (and their order) on the switch and b. swapping the dLAN adapters.

Although you haven't advised the symptoms of your problem, it probably makes sense to start at a "lower level".

I postulate that the powerline device may simply not be able to receive a signal from other devices. There are a number of possible reasons for this, including things like distance, but more relevantly different power phases or things like 'RCD's between circuits. (I know in my house powerline devices would only work between certain sockets because of RCD protection - I suspect this is the problem here). To eliminate this as an issue, try moving the powerline devices onto the same circuit and seeing if there is a problem. (If there is, its either a faulty device - or conceivably an encryption/privacy setting - not that I've come across those).

If you have a "flat" network (ie 1 router with your WIFI, ethernet and powerline devices all plugging in to the router - directly or via unmanaged switches - which would be a typical setup for most homes, yes, you would be able to share your NAS with your powerline devices. (Think of a powerline as a slow ethernet cable run between power sockets - they don't do any routing or firewalling). Generally - and simplifying a bit - if you look at all your devices and they have the same IP address range (eg 192.168.1.X), devices can be plugged in to any interface and will see other devices in the same range.

Not the answer you're looking for? Browse other questions tagged switch powerline-networking or ask your own question.

20
TP -Link powerline adapters randomly disconnect
1
Understanding power lan - from a tech point of view, why does it get slower
1
What technology to use for home network

6
How do I connect multiple devices with powerline adapters?
3
Home Networking: Connecting a switch to a router
2
Power Line Adapter extended range
0
How can I prevent data in my network from hopping via the router, instead of using only the switch?
1
Understanding Powerline speed
0
Can't make UDP connections between Windows 10 and Android on DLAN
2
Would Wake-on-LAN work with powerline adapters?