I have a problem similar to the one described in the question:

Windows is very slow with my new SSD

I believe what I need is to install the proper driver for either the SSD or the motherboard, but I don't really understand what I need.

I have found that one guy resolved same thing by installing driver for "Intel 5 series 4 port SATA AHCI controller" (http://forum.crucial.com/t5/Solid-State-Drives-SSD/SOLVED-Crucial-v4-CT256V4SSD2-disastrous-performance/td-p/110668).

I've tried to do the same, but can't find appropriate driver on the Intel Download portal. I've tried to find "SATA AHCI Controller windows 8" on http://downloadcenter.intel.com/SearchResult.aspx?lang=eng, but it gives only RAID drivers.

Am I correct and I need to install a driver of some kind? If yes, what driver(s) do I really need?

Probably need to update BIOS? That sounds dangerous. Do I really need to do that?

More details about my problem:

HDTune confirmed the max speed of the new drive is 250Mb/s. For me that sounds like the system recognized and uses drivers for the SSD.

Though, I've noticed quite a few strange things:

The 1st strange thing is observed during big files copying from HDD. Data transfer speed was very low. I copied big files from HDD to SSD (100-1000MB each) with Total Commander and it showed average speed changing from 5 MByte/sec to 50 MByte/sec. Task Manager on the "Performance" tab displayed that drive C: (actual SSD drive where I copied files to) was 100% busy, write speed was also varying from 5MB/sec to 50MB/sec. Average response time was around 800 - 1500 ms.

I understand the top limit (limited by HDD read speed), but can't understand why sometimes copying speed dropped to such a low level.

For me that looks like disk write operations are overseen by Windows Defender (I have default configuration) and it validates all requests and verifies they don't have any 'viruses'. But I stopped defender (turned off real time protection) to check if something would change and that had no visible impact on file transfer speed.

Please let me know if any additional information is required to understand the problem.

Thanks a lot in advance!

P.S. I have motherboard based on P35 chipset (it is quite old, but still performs well for me).

is firmware update. It was released around 2 months ago, and roughly in 1 month after I posted the question. 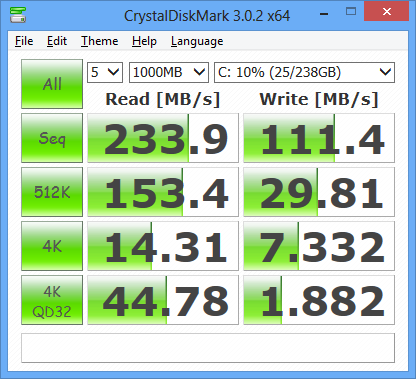 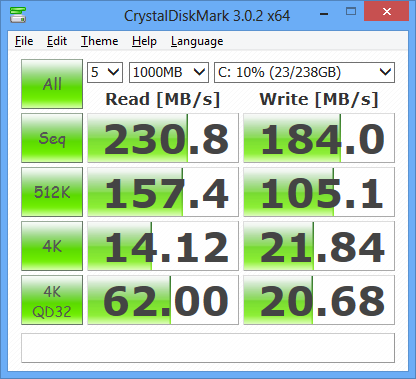 Update to previous answer: update of firmware helped for a while, but problem become more severe again.

Eventually I called to Crucial support and asked for compensation of reasonable price of SSD, they did... and eventually I got SSD performing as quick as SSD should.

Some details are in topic:

But in fact, I also posted there information they gave me a credit, though looks like that my message was deleted by admins.

Not the answer you're looking for? Browse other questions tagged windows-8 performance ssd or ask your own question.

18
Windows is very slow with my new SSD

18
Windows is very slow with my new SSD
2
Why does my Crucial M4-CT128 SSD only achieve about 30 MB/s on writes?
1
Using a SSD to improve browsing speed
1
2 SSD, 1 HDD, why is second SSD much slower when copying data HDD -> SSD