Is it safe to delete AppData\Local\Temp?

Some programs keep important files in there, surprisingly. If you are interested in freeing some space I'd advise to only delete the files excluding those that were created in the last 24h or so, or the ones you know for sure aren't used by other programs, such as old installers from software you downloaded, etc. You can use software such as CCleaner to do that.

The answers to this question provide ways to do this clean-up safely and automatically.

Yes, you can. Windows already does it for you when you use the Disk Cleanup tool (cleanmgr.exe) and select the Temporary files checkbox.

You can, but I am assuming your intention is to free up disk space. If this is the case you might want to use clean-up instead of doing the process manually. Go to Run and type cleanup: 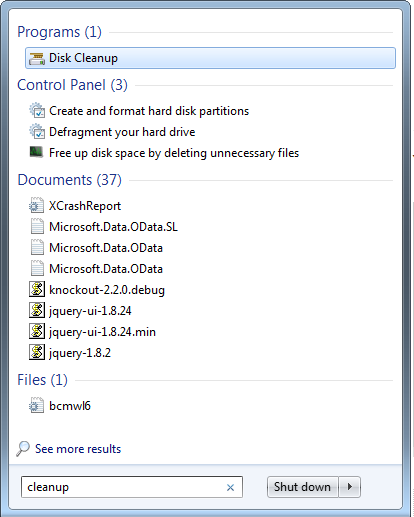 Window will pop up where you will be able to select for deletion of temporary (and other mostly useless) files from multiple locations, not just C:\Users\[Username]\AppData\Local\Temp. 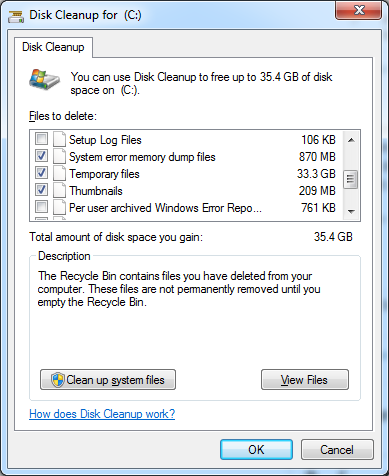 In theory, AppData's Temp folder (%TEMP%) is the place for programs to put files that can be deleted immediately after all handles to them are closed. In practice, many programs - including Microsoft's own - violate that guidance. That's why some disk cleanup utilities (notably CCleaner) by default leave files that were last modified less than 24 hours ago. It's almost certainly safe to remove those, and unless you have particularly rickety third-party software, you can probably remove any that aren't in use.

That said, however, I would advise against demolishing the actual Temp folder. It will get recreated periodically, but programs can rely on it being there. I've seen programs that attempt to create files under %TEMP%, expecting the call to always succeed. (For example, attempting to echo stuff > bogusFolder\x.txt will fail if you don't have a folder called bogusFolder.) Therefore, it's best to leave well-known folders where they are.

The same advice (for both the files and the folder) applies to the Temp folder under Windows, though that Temp folder is used only by the system or programs running as administrator. It tends to get full of log files, which can be deleted with wild abandon.

What I like to do is delete everything in the folder, but not the folder itself. Any files that "require special permission from the administrator" to delete, I leave alone.

This is generally the safest way I can think of when it comes to emptying your Temp folder.

Yes, you can because some of those old files can become corrupt. So if you delete the entire folder nothing bad will happen. All of the ones that you need, the programs will create new ones.

And if you can't delete some then a program you are running is running those temp files so just leave those alone. I do it all the time on my user's machines that file, and the C:\WINDOWS\Temp directory as well.

Yes, it is safe. I did it many times.

This question arise when we need to wipe-up our hard disk drive. I recommend using WinDirStat which is a disk usage statistics viewer and cleanup tool for various versions of Microsoft Windows.

And check this post: Guide to Freeing up Disk Space under Windows 8.1

My advice would be to create a new folder in the temp directory and move any files/folders you want to delete to the new folder, check if everything still works. If you are confident everything is ok you should be safe to delete them. If you run into problems just move the files back to the temp folder again.

41
How to remove temporary files after reboot on Windows?
0
Installed OS on SSD and now it's full, how can I offload storage issues?
1
CCleaner doesn't include username\AppData\Local\Temp for cleaning

5
Delete the "Temp" folder?
2
Windows 7: What is \Windows\Temp?
4
Environment Variables for Windows' Built-in Libraries?
0
Unable to delete lucene file in %temp% folder windows 7?
9
How do I set the TEMP environment variable for the "Network Service" user?
3
Is it safe to change %TEMP% and %TMP% to a custom location?
27
TEMP vs TMP in Environment Variables
17
Is it safe to delete Java folders from C:\Users\(Username)\AppData\LocalLow\Sun\Java
2
Safe to delete empty folders from c:\windows\assembly?