Is there a way to reset chrome://flags to their defaults?

I was messing around with chrome://flags/, and don't remember all the changes I made. Now I want to get it back to its default state.

Since I use Sync, does reinstalling Chrome do it? Or better yet, is there a way to do it without reinstalling?

For the record, now there is a Reset button on the flags page. 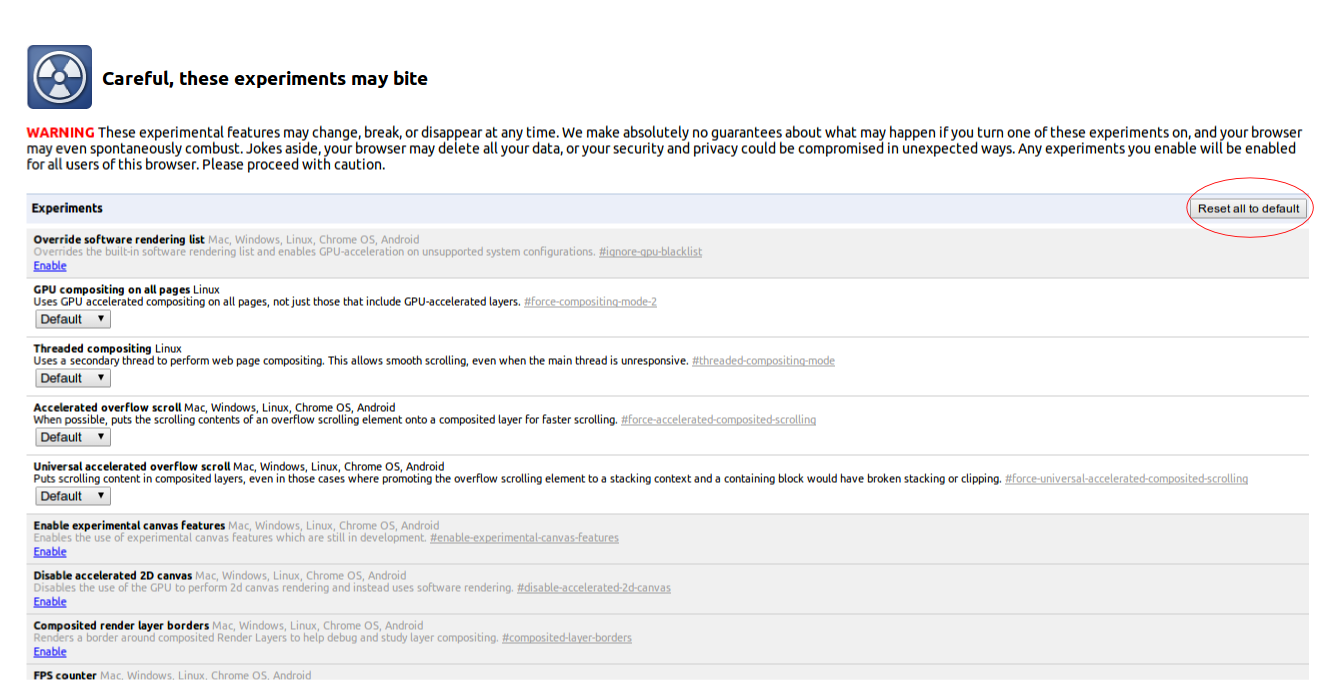 Flags that can be enabled or disabled have gray font color in their description if set to their default value. The description of altered flags is black.

All drop-down menus should be set to Default or Automatic.

Invoking Chrome with the command-line switch --no-experiments doesn't revert the changes made in chrome://flags, but it ignores them entirely.

In Windows, to reset FLAGS:

This resolution is for a Linux build (Ubuntu 16.04) Chromium 56 to 58.3019. I broke chromium after activating a flag related to be attempting to get Chromium exclusively to cast to my chrome cast device. Chromium would crash after being open for a second, spat out error code: Signal 11 SEGV_MAPERR, + memory log. I had an misc. error due to invalid codec but that was of my own folly so I'll digress on that point as it it's resolved.

After realizing chromium did work in guest mode I assessed it was an setting/config issue. I couldn't pinpoint / access the flags to restore functions. So I deleted the chromium folder within /.config/chromium from terminal. Thereby resetting chromium to default values all over, re-login and re-sync. 'cd .config' 'rm -rvf chromium'

0
How to copy Chrome's flags from a different Google account?

0
How can I restore "chrome://plugins" to default settings?
0
How to change user in Google Chrome?
4
Make Chrome always execute with flags, for eg., directly opening an HTML file
2
How/Is there a way to fix broken TASK links on Windows 7 for Google Chrome?
5
How to Recover Google Chrome User Settings
2
Unable to reset Google Chrome theme