Can gnome terminal be set up, to copy selection without prompt?

I often times want to copy a set of commands from terminal, that do not have an output; say a block like this:

Now, if I select this block of text with the mouse, and copy it with Ctrl-Shift-C; then when I paste in a text file, the prompt is there (as expected) - and then I have to waste time deleting the prompt :)

So I was wandering - is there a setting for gnome-terminal, such that when I do the same kind of copying, I end up with only the commands - without the prompt? This is what I want when I finally paste:

I'm interested in a solution that will allow me to get this in clipboard, with just mouse selection and Ctrl-Shift-C; I am aware I could do history X, but then I'd have to grep it - and think of a suitable grep expression (and the same problem is if I record a typescript of terminal session with script).

Any facilities that exist for that? If not for gnome-terminal, any other terminal that can be used under Gnome that offers such facility?

In Gnome Terminal, you can select a block of text using Mouse + CTRL key. This way you can copy all of the console output without the prompt. e.g:

replacing 5 with however many commands you want to go back. That should get you a clean listing that will copy/paste easily. Not exactly the kind of approach you seem to be fishing for, but it might suit.

Well, I was quite bugged by this problem, so finally I coded a solution which comes very close: a filtering plugin for the Glipper clipboard manager, which allows for regex processing in filter functions, which can be applied to the clipboard contents upon a Copy action; released here: 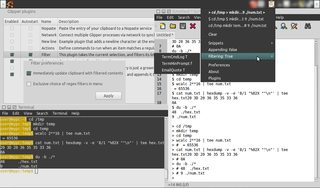 However, since I want to use this only occasionally, toggling filtering may not be the best idea (since you have to toggle ON, copy/paste, and then toggle OFF) - so the plugin bypasses normal operation when a filter submenu entry is clicked, if Ctrl, Alt or c are held; so my "minimal" action to perform a one-off prompt filtering is like this:

In the end, I would still have preferred that the terminal itself has a keyboard chord for filtered output (say, press Ctrl+Shift+a, then release a, then while holding the others press c) - but then that would be OK for a single filter; and if you want to choose one from several filters at runtime, again there is the problem of having of yet another action to do a choice; and if it is solved via GUI window of menu entries - then this pluggin is just as good, I guess. Even better, it works for any GUI source of (copyable) text under Gnome desktop - not just for terminal.

Unfortunately, it's developed for Gnome/Gtk 2 / Python 2.7, so it's already deprecated; still, hope it can hope others (until I hear of a better solution - hopefully in this thread :)),
Cheers!

If you use, tmux terminal multiplexer, you can do this easily and much more!

Noam Manos already pointed out in the other answer Gnome Terminal does allow block copy with Ctrl + Mouse click and drag. I just wanted to point out another alternative which is more powerful. The tmux supports putting your terminal in "copy mode" and allows you to do block copy and much more -- It even supports multiple paste buffers that you can copy and use later.

I use following lines in my .tmux.conf file to use vi keybindings for block copy:

It does take some effort to learn to setup and use tmux, but it is worth it and I am happy with it.

Not the answer you're looking for? Browse other questions tagged linux terminal gnome copy-paste clipboard or ask your own question.

0
gnome-terminal like terminal in Windows XP?
2
Make emacs explicitly copy to/from the X11 selection and clipboard buffers?
3
VIM copy doesn't work in Gnome Terminal (to system clipboard)
2
UNIX, how to compare and transfer values between two text file
9
How can I copy to the system clipboard from byobu?
0
Copy/paste stops working in gnome-terminal over VNC session