For work, I am SSH-ing into a server. I haven't done this for months, so something has changed where it now asks me for a password. Previously, after authenticating it would work. Here's what I typically write to ssh in: ssh -p2222 username@123.12.123.123

I looked at the debug info, and it showed that the server wasn't even asking for the appropriate keyfile. Instead, it first offers an public key that I deleted (id_rsa)..then it turns to private keys...then it asks for a password, which I shouldn't need.

What do these errors mean, and how do I get ssh to work without getting prompted for a password? This is important because I use the GUI called Fugu --the only GUI for SCP available--and I can't use the -i option in it!

Is there something on the server side of the equation that I need to get fixed?

Just change the names of the files with keys to defaults.

Is that not possible?

If you have a non-default private key file (e.g., ~/.ssh/correctKey), you can configure SSH to be aware of and try using that alternate key by adding an IdentityFile directive to your ~/.ssh/config file (creating that file in the process if it does not already exist). For example,

And there are many other options you can configure in that file too, such as specifying the default port to use on a particular host (e.g., always use port 2222 when logging into 123.12.123.123, or the default username. See sshd_config(5) for details. 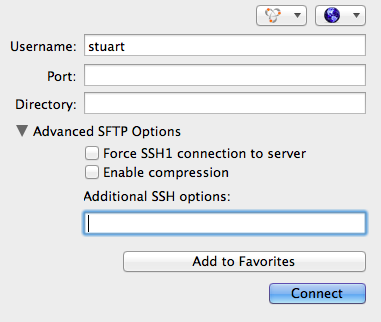 You could try passing -i ~/.ssh/correctKey via that text field.