I have followed the following steps while configuring the Virtual Machine.

When I start the VirtualBox it shows the option to start Fedora. The loading initiates then the following screen appears 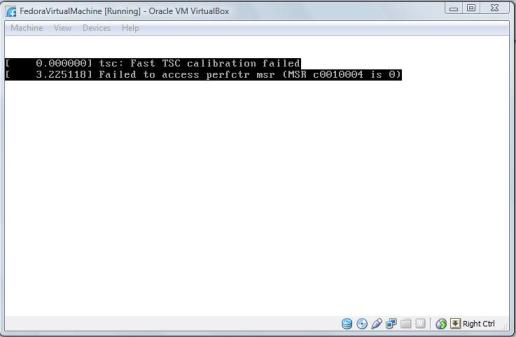 This is followed by a blank [black] screen for a several minutes and this screen shows up, 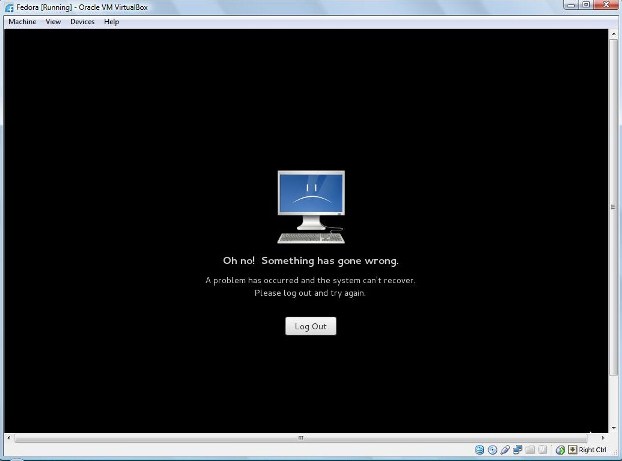 Seems to me the OS does load, but there is some issue. Which I can't figure out. Please help.

Note: The .iso is not corrupted because I can use it install it as Dual OS

I tried the same with Fedora 15

and it worked! But when it started it showed "GNOME could not be loaded" and the same "(Oh no something has gone wrong screen)2" I logged out and logged in again, and GNOME started and everything turned out to be fine.

Then I tried with Fedora18 again and to my surprise it loaded properly too. Initially it too showed GNOME could not be loaded, but relogging in did the trick again.

So finally problem solved (Don't know how!) I am yet to figure out why I ran into issues with Fedora18 initially and why did they miraculaously disappear when I worked with Fedora15 and then came back to Fedora18.

Anyone who has and idea on this behavior, please do respond and help to track the issue that occurred in the first place.

Browse other questions tagged windows-vista virtualbox virtualization fedora or ask your own question.

1
VirtualBox not working on Ubuntu 11.04 (Natty Narwhal)
11
How to use Oracle VirtualBox' remote display feature?
2
Why does booting Fedora 17 (and 18) into virtualbox from a live cd fail?
1
Virtualbox display issue
1
Oracle VirtualBox guest machines become inaccessible
2
How to extend root partition on LVM in VirtualBox with snapshots
0
Oracle VirtualBox on Windows 10 messing with system sleep
0
Virtualbox causes automatic logout from Kali host when booting Windows guest and moving the mouse at the same time
0
On a Ubuntu host I run in Virtualbox a win10 client, but the screen size is limited