IPv6-connected FreeBSD server is not available via LAN

I have a FreeBSD server with the following output of uname -a:

It is using SixXS to establish an ipv6 tunnel with the virtual interface gif0 and acting as a ipv6 router for the LAN by router solicitation. I got a /64 subnet which is announced by the router and which the clients are using. The server is connected to the home LAN via a WLAN AP acting in bridge mode connected to interface em2. To speed up data transfer speeds the server is additionally connected to a gigabit LAN with the aggregated interface lagg0. 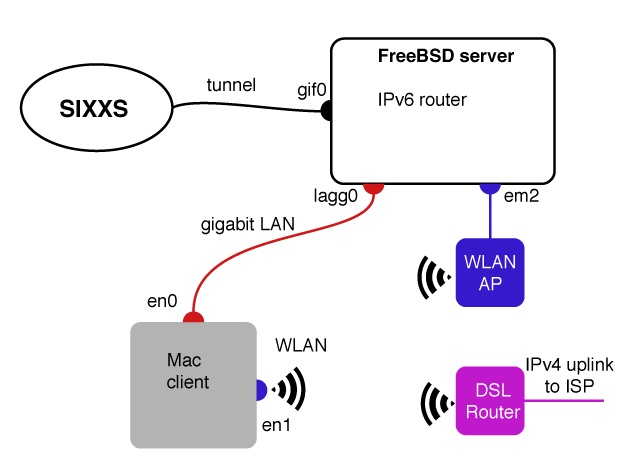 The LAN clients get their correct ipv6 addresses and are having ipv6 internet connectivity. The strange thing however is that I am not able to connect to my server in the same LAN via SSH over ipv6.

Could it be that it is problematic that the server is hosting two different ipv6 addresses (one on lagg0 and one on em2, so that it is reachable via gigabit ethernet and wlan)? Interestingly the ipv6 address of the WLAN interface on em2 is answering to pings, the lagg0 gigabit-connected ipv6 address is not answering.

Is there a fundamental error in my setup? It seems to me that the routing is screwed up a bit, but I am not sure how to fix this.

Here is the configuration of my aggregated gigabit interface lagg0 (ipv6 address faked).

The problem was that two network interfaces of the FreeBSD computer were connected to the same subnet. This means that it is impossible to route it properly.

The solution would be to give each interface lagg0 and em2 a separate IPv6 subnet and it works.

Not the answer you're looking for? Browse other questions tagged ssh router ipv6 or ask your own question.

7
IPv6 Tunnel via Own Linux (IPv6-connected) Server
1
How and why is this ubuntu system getting an ipv6 address?
1
DD-WRT setting to deny communication between wired clients
1
Will “smart” network switches send data direct or via its DCHP server?
44
How does a router obtain its IP address?
2
Can't connect to server when server is on LAN and computer is on Wifi (Win10). All other devices can connect