Ask Question
Asked 8 years ago
Active 8 years ago
Viewed 10k times
0
This question is unlikely to help any future visitors; it is only relevant to a small geographic area, a specific moment in time, or an extraordinarily narrow situation that is not generally applicable to the worldwide audience of the internet. For help making this question more broadly applicable, visit the help center.
Closed 8 years ago.

This is something of a complicated problem so I will describe it to the best of my ability. Recently, my computer (Windows 7 Pro custom rig w/ I7-2600k, Samsung 540 SSD, and GTX 480 GPU)has been functioning perfectly fine with one problem, every so often at seemingly random intervals it will cease functioning. But not really, see my computer remains primarily responsive (I am able to move my mouse and already opened applications continue to function normally) however, if I open a new instance of a program, close an existing program, or try to interact with most of windows explorer whatever it is I am interacting with freezes. For example earlier today I was watching a show on Netflix without issue but when I attempted to open the Windows Start menu it opened and then hung, remaining "on" my screen but unresponsive.

Sometimes after several minutes of waiting in this "Hung" state it "snaps" back into normal function and continues working normally; at least for a short while until it falls back into the lag. This is where it gets weird: During these incidences (I use a desktop gadget to monitor HDD, GPU, and CPU usage) HDD utilization drops to 0% on all three of my hard drives (SSD for boot, 2 x Seagate 1TB drives for data) even if I am attempting to use my drives at the time. Additionally, CPU usage occasionally spikes to 30% and most interestingly, GPU usage spikes at 90-100%.

I have so far run chkdsk, Kaspersky AV, memtest, and Sentinel Drive Diagnostic to no avail. (Though chkdsk did find some problems on my boot drive, they were repaired by chkdsk and my computer continued to express the symptoms so I assumed those disk errors were not the cause.) On top of all the other problems, my computer is now also reporting to me that "Windows is not genuine" even though it has a valid serial key inputted (Yes, I did purchase Windows 7 legally so that is not the problem), Norton antivirus is failing to run any scans or updates, Google chrome crashes unexpectedly at rather normal intervals, Nvidia graphics updates failed to install citing no specific reason (no error code report or anything of the sort) and lastly Windows repair install failed when attempted, again citing no specific reason.

Any advice is greatly appreciated and if additional information is needed, I will happily oblige. I have never seen anything like this before in my life on any system so even blind speculation is welcome

There is two built in diagnostics that may be helpful to figuring out your problem.

To get to them right click on Computer from the start menu and go to Manage. From there navigate to Computer Management -> System Tools -> Performance -> Data collector Sets -> System 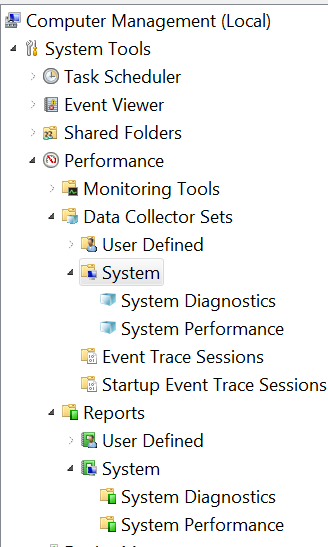 System Performance will do a basic test that last one minute, System Diagnostics will do a deeper test but it takes 10 minutes. You start the recording by right clicking and pressing Start

Once you start the report it will show up in the Reports section, you just need to click on it to view it. 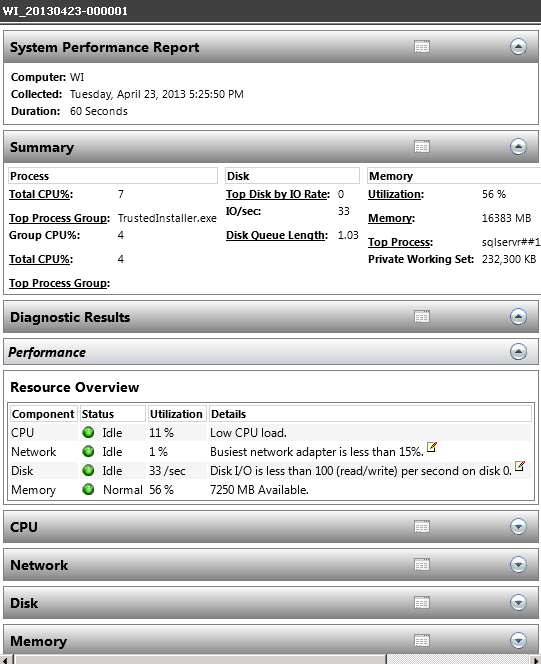 (If you get a graph with a bunch of lines instead of the nice report like the image above, right click on the report from the left hand window and choose View->Report)

From there it should flag anything that was out of the ordinary (high cpu, high disk usage, ect.) and it should help track down what is causing your slowness. 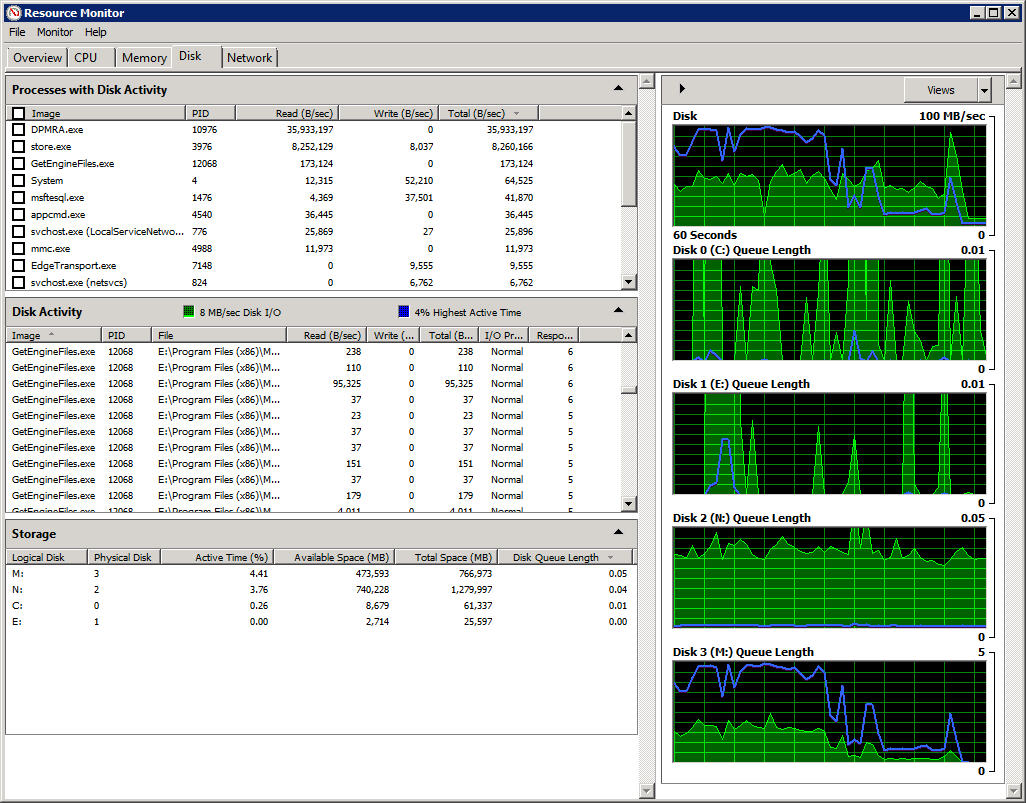 Open Windows Task Manager, click on the Processes tab, click the Show Processes from All Users button, and click on the CPU column heading to sort highest usage to the top. Select Always on Top from the Options menu, and have a look there when the computer freezes again. It should tell you which process is slamming the computer.

Not the answer you're looking for? Browse other questions tagged windows-7 windows hard-drive ssd gpu or ask your own question.

4
Windows does not generate report.html for the performance reports