Tab groups are out of control, how can I get my tabs back?

After having removed some of my (many) tab groups, my problem with really bad performance was solved.

Yesterday I did the following:

I’m not sure what exactly happened, but I see the following symptoms:

At some point after that always 4 Firefox windows opened. Two of them hadn’t any tab groups, the other two contained the (flawed) tab groups. When I tried to close one of the latter ones by clicking at the closing X icon, I got the warning message that this would close ~ 570 tabs (I don’t know my real tab number, but it could be that high, but it could also be the half of it; maybe the tabs got doubled somehow?). I closed the two "empty" windows without problems, after that only the 2 other ones opened when starting Firefox. Then I closed one of them too, confirming the warning message. Now I’m back at one window, which still contains the flawed tab groups and, what feels like, hundred of tabs (bad performance).

I tried to restore an older session, but unfortunately all backups seem to be empty: 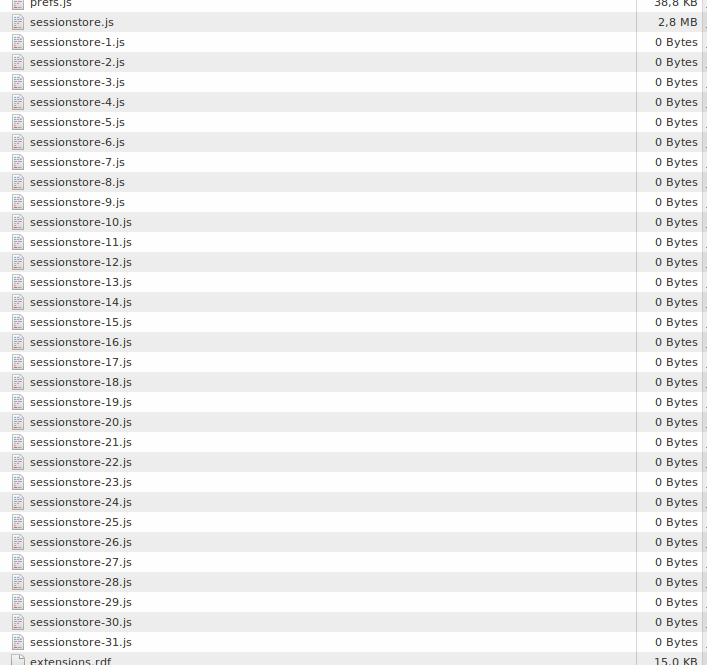 I copied the only sessionstore.js containing content yesterday (a few hours after this whole accident happened), and there it had 4.3 MB. I tried to import this session into a new profile. All my bookmarks were successfully imported, but I had not a single tab group nor any open tabs.

What can I do?

I guess it could work by closing all those stacked tab groups, but that would take, like, days.

Okay, the problem is reproducible. Whenever I start Firefox now, this happens again.

The "solution" is to wait until the known Unresponsive script warning messages appear. As long as those messages don’t pop up, I can’t access any tab group.

Well, how to trigger these messages? Some time ago it was sufficient to load the tab group list (by right-clicking a tab and hovering over "Move to tab group"), but this doesn’t work anymore (because now it loads all tab groups but without the real tabs inside).

I found out that re-opening a closed tab seems to trigger the warning messages (right-click at tab bar). It doesn’t really open the last closed tab, though, as it seems to open a tab that was closed last in a certain tab group in the previous Firefox session (and not the tabs from the current session).

After re-opening one, two or sometimes three tabs the warning messages appear (until now, at least).

Then I click at "Continue" and after a few seconds all my tab groups are back to normal.

However, it seems that the "open last closed tab" function is broken for the whole session then. Even if you close a tab, the option is greyed-out.

Not the answer you're looking for? Browse other questions tagged firefox browser-tabs panorama tab-groups or ask your own question.

0
How to freely group tabs with Tab Mix Plus
0
Do "Tab Groups" count as a selection for the purposes of "Don't load tabs until selected"?
1
How to restore Firefox tabs after removing adware?
3
Is there a way to control the tab group order in Firefox
6
How to get back to the previous tab I was working on, after closing the latest
1
Restoring Firefox tab groups after a power outage
4
Move firefox tab group into new window
1
Programmatically close all tabs in Firefox Quantum