In questions like this one and in websites everywhere it's noted that SSDs use much less power than HDDs... usually citing ~2 W vs ~6 W for HDDs, my question (and sorry if its stupid just need to be exact) is that per hour? Need to calculate costs savings in power consumption if we switched all our workstations to SSDs

If your drive consumes 2 Watts for 1 hour it would have consumed 2 Watt-hours of energy.

A Watt is merely a measure of power use. It's derived by multiplying voltage and current draw. A drive that runs at 12 V and draws 100 mA of current would consume 1.2 Watts of power.

To restate - if you ran that drive for an hour, you'd consume 1.2 Watt-hours of power.

In your case, 2 Watts vs 6 Watts, your cost would be 1/3 for an SSD vs HD. Calculations of time are unnecessary.

TLDR: Its not a cost-effective way to reduce your energy use, except on a laptop.

One watt is equal to one joule (a unit of energy) per second. Watts measure the rate of energy transfer (power). You're billed, most likely, by amount of energy consumed, probably in kilowatt-hours (kWh). That's equal to 1000 watts used for one hour (hence the name).

You don't actually need to figure that out yourself, Google will do the math for you. (That's 1 watt, used constantly, for one year—24x7. You can multiply by "(40 hours/week)", etc. as needed, Google calculator is pretty good at this kind of stuff.)

Now, the next problem you'll face is that neither HDD nor SSD are constant-power devices. Both use more power when actually reading or writing than when sitting idle. And hard disks that are idle for a bit will spin down, and use almost no power. Further, SSDs are generally faster, so faced with the many workloads, will get back to idle sooner than HDDs. So you'd really have to measure to get a good number, as Brad Patton says.

But, as an upper limit, let's take that 6W figure, and ask how much it actually costs to use it 40 hours per week, all year—assume that a SSD uses no power. Google gives 13 kWh. Even if you're paying a fairly high rate, say 30¢/kWh, that's under $4/yr. At over $100/SSD, even with a 0% discount rate, the payback period well exceeds the lifespan of the SSD.

It's different on laptops. For example, my laptop for example runs on about 6.5W total. So saving even a fraction of a watt increases battery life noticeably.

You state 2w vs 6w SSD and HDD, that's peak power useage, if you are reading web pages, the SSD will be idle alot of the time, whereas the HDD will spin. The SSD longevity is 1/4 longer than average HDD i've read, which relats to transport and production energy, and it uses less raw materials.

for a laptop of 20 watts with 3 hours of battery, you would have 1/5th more battery life. it's about 30 minutes extra. 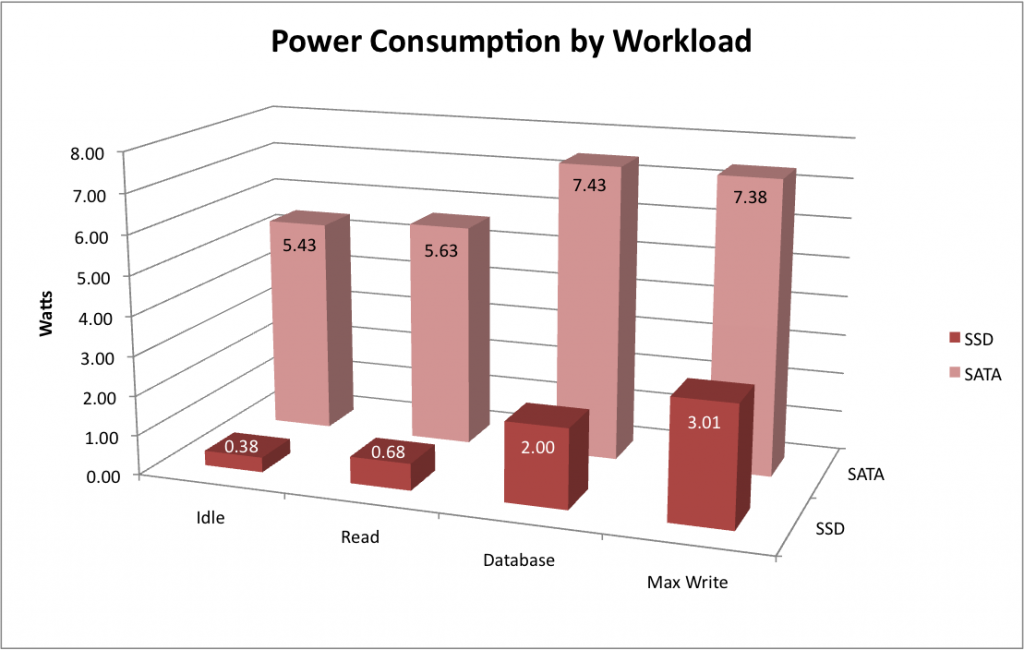 To calculate cost savings you should really get a Kill-a-watt type device and measure the workstation for a day or more with a HD and with a SSD. Since usage will vary quite a bit over time and that will be the best representation of the actual savings. Also this completely ignores the incredible performance benefits of SSD drives.

See Jeff Atwood's blog post Why Estimate when you can measure for more information.

I was curious about this today so I ran some numbers based on current technology. I looked at the spec for two Western Digital drives (one HDD and one SSD).

They state an average of 9.1W for the HDD and 0.06W for the SSD (60mW). At the current prices in my locale, it works out that the HDD costs about 62 cents per month and the SSD costs 0.4 cents per month to operate. The SSD saves $7.40 per year in electric costs if left on with load 24/7, but if power management is used, it would likely be more like $2.

Editorial The biggest issue in recouping the costs are the price difference; if you can get away with the smallest SSD (lets say 120GB), the current smallest HDDs are about the same price (25$), but are 500GB. But a 120GB is simply not sufficient for anything but basic usage. For simplicity, the cheapest 250GB SSD is about 35$ and 480GB is about 65$ which would take about 1.35 years and 5.4 years to break even on energy cost + initial cost if the drives are in constant use 24/7 (which would be rare in workplace client machines).

So, ignoring that SSDs increase user productivity, it would make sense to buy 250GB SSD over 500GB HDD since it would save you a little bit of electrical costs. 480GB SSDs would likely never recoup the price difference based on energy alone because of normal machine replacement cycles. But to me, the price of SSDs for client computers are easily offset by increased productivity (quicker boot, less waiting on documents to load, etc).

Editorial Update 20200921 It no longer make sense to even consider HDDs over SSDs if you only need a 250GB or smaller capacity drive. 500GB HDDs are hard to find new and 1TB is the current standard and they are priced almost identical to the 250GB SSDs. Couple this is increasing electric costs (up 30% in my locale since I originally wrote this answer) and even a 480/500GB SSD works out to be cheaper than a HDD.

Power(Watts) is Joules per second.

There is such a thing as a watt hour and a kilowatt hour.

a watt hour is a unit of Energy, an alternative to Joules. Not a unit of power. It's how much Energy that is one watt(joule per second) over an hour. One watt hour is 3600 Joules. So, it's a bigger unit.

I suppose you could get an energy monitor and plug a drive in so it gets its power from the wall/mains socket. Or just use the rated power that the hard drive shows you. Then find out what the rate of charge is for electricity.

Remember most people have multiple HDD their comps. I myself had 4 until I bought 2 m.2 drives.

Also that is 2 mW for the ssd. (M.2 anyways) not watts, milliwatts

looking into this it seems that on many old laptops the CPU seems to work harder but this is because it can access so much faster than with an HDD. So data is hence processed faster overall but for something like playing a DVD it makes very little difference. I did notice that with some drives the OS used is significant such as windows 7/10 versus Linux as some support advanced features like drive sleep mode. Playing films from RAM (cough 8GB /cough) is going to use a lot less power than from the drive.

ConundrumConundrum
1
Add a comment  |
Highly active question. Earn 10 reputation (not counting the association bonus) in order to answer this question. The reputation requirement helps protect this question from spam and non-answer activity.

Not the answer you're looking for? Browse other questions tagged hard-drive ssd power or ask your own question.