What does it mean when a file is blocked in Windows?

I can see whether a file is blocked by opening the file properties (right-click > properties) and looking at General tab > Security (right under the Attributes section). 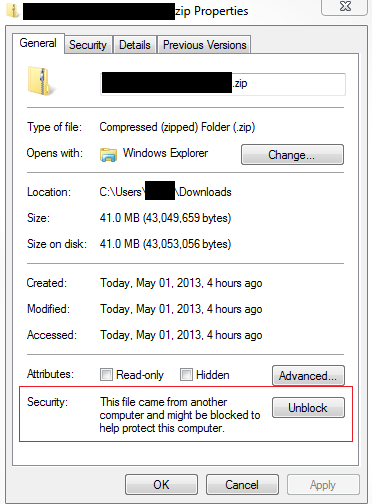 What does it mean when a file is blocked? How does a file behave differently in a blocked state versus an unblocked state?

This is driven by the alternate data streams. Windows flags files as potentially untrusted if they have been downloaded (for example) from the internet zone and will disable execution.

As a side note, Sysinternals provide a free tool called 'streams' (via Microsoft) which allows you to remove (including recursively) all alternate streams from a file / directory.

As a second side-note, the reason Windows does this is because it's a fairly simple way to construct a trojan or virus. As discussion on this briefly here.

In 2009, the alternate data stream was used by a click fraud Trojan named FFSearcher. It used the stream name “Zone.Identifier” which is a stream name that Microsoft uses to mark executable files downloaded by Internet Explorer. Instead of a simple zone identifier however, the Trojan implanted a DLL file that contained the Trojan’s code.

Files and Directories on the NTFS system have an additional 'stream', this is where the blocking information is stored and cleared when you click the 'unblock'. It is not an actual file attribute. This is tedious for lots of files. Download the 'streams' utility from the microsoft website. use 'streams -d *.epub' for example, this deletes the stream data only, preventing some windows apps from slow loading (Coolreader) or refusing to handle the file correctly.

Info on streams and the streams utility.

Not the answer you're looking for? Browse other questions tagged windows file-permissions properties or ask your own question.

2
Disabling warning prompt when opening a .doc file in Outlook
2
Manually mark executable as "from another computer" on Windows 10

4
"This file came from another computer and may be blocked..."
3
What do light purple color mean in uTorrent
8
Windows File Access Denied
3
Does Windows actually verify digital signatures in the Properties dialog?
10
Why does this file apparently not exist when attempting to delete it?
1
Why does after Installing new windows folder and file asking for Permission?
1
What does "Run as hidden window" mean and how can I show the hidden windows?
0
Windows has started encrypting all my newly created files and folders by default