How to determine root cause of poor laptop cooling?

I've been using a Lenovo T420 laptop for 2 years. Usually when playing 3D games with discrete GPU, the CPU/GPU temperature goes to 100 °C-ish. When browsing websites, it's about 70 °C. It seems the average temperature is a bit too high, even though I just cleaned the heatsink at the Lenovo service center.

Is there any way or tools to diagnose and determine the root cause of the poor cooling issue? I want to know whether to replace the heatpipes, fan, heatsink. 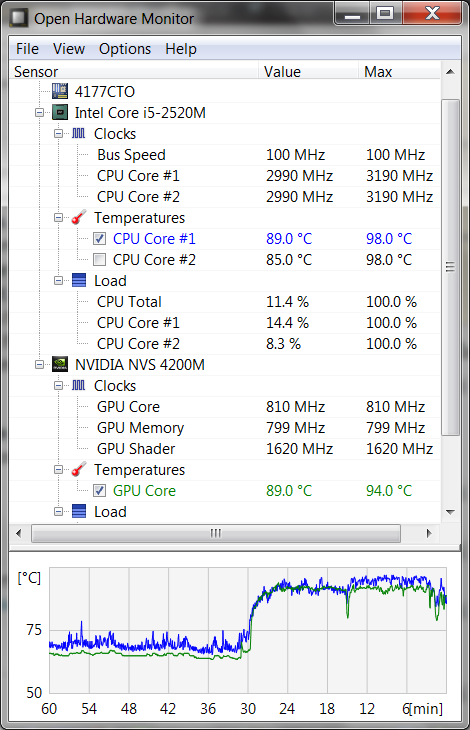 A possible problem is neither of the three. Usually, GPU (as well as CPU) is connected to the heatpipe through a thermoconducting block (copper or aluminum, sometimes a weird blue thermal rubber), with a tiny quantity of thermal grease to fill in microscopic cavities which could lower conductivity. Too little grease leaves some spaces open, and too much grease acts as an insulator; both can easily reduce thermal conductivity enough to raise CPU/GPU temperatures by 10-20 °C.

Sometimes, the air flow also is modified by foam blocks that can easily get dislodged during servicing (the "WTF is this stuff for?" effect). Then, less air is collected from the hottest areas, replaced by not-sufficiently-warmed-up air from nearer inlets, leading to temperature increases.

I can say that after replacing my old and cracked thermal pad with a copper shim and two tiny drops of liquid metal (dangerous as all hell to work with in a computer (1)), my GPU went from around its usual 85 °C to 68-70 °C when watching videos. The heatpipes were OK, but not enough heat was getting through to them from the GPU.

(1) "liquid metal" is actually an alloy of gallium, indium and tin. It is one of the best thermal conductors that can be used in this situation because it's a metal and, hey, it's liquid. BUT being a metal, it can short circuit a motherboard with absurd ease. Also, gallium (as well as the much more toxic mercury) can poison some metals such as aluminum: never place it in contact with aluminum, and clean immediately any drops that might have come in contact with an aluminum chassis. A telltale of gallium contamination is grey-black smudges that apparently come from nowhere (they actually come from tiny gallium droplets).

First I'd actually open the computer and inspect the inside. Check to make sure there are no obvious flaws. If there are none I would check to make sure that something in the background isn't eating resources. My next question would be are you sure it's 100C. 100F seems more realistic considering I can boil water on your laptop if this is the case. Now you can play the "hover hand" game. Open the PC and check to make sure that the heat pipes are in fact hot. If your laptop is 100C they'll be amazingly hot. If it's really hot you're good. If not that's the problem. Then hover your hand over the fins. They should be reasonable hot also. If it's none of this just spot check your fans speed just in case. Does it rev like a mofo when it starts up? If not that's most likely the problem.

Last of all Have you tried talking to the guys at the Lenovo service center? They will most likely be able to help you the most considering they can play touchy feely with it.

Not the answer you're looking for? Browse other questions tagged laptop cpu cooling temperature or ask your own question.

3
How to cool my laptop?