I would like to have 2 connections on 2 computers, where 1 connection will be used for internet and the other will be used to transfer files from a Windows 7 Ultimate computer to a Windows XP computer.

The connection for the internet goes to a router, the other connection is a twisted pair cat5 ethernet cable straight from the windows xp computer to the windows 7 pc.

I would like this setup to eliminate the router in between when transferring files from one computer to another as it will be faster.

I tried setting a static IP without a gateway but didnt work.

Couldnt find anything on google, actually im tired of researching something which I do not know how to explain in a few words, I had to give an example.

An easier solution, get a new router/switch.

Your computers support Gigabit eithernet, however your router only supports only up to 100 Megabit. I am fairly confidant due to the math you gave us in your coment.

Throw in a fudge factor saying you really got 12ish MB/s over the router and you rounded up to 15 and that is the exact behavior you would expect to see of a Gigabit link downgrading to 100 Megabit.

Repacing your router with one that supports Gigabit, or buying a switch and hooking your network up like the below diagram will make the speeds between the two computers act like the direct connection. 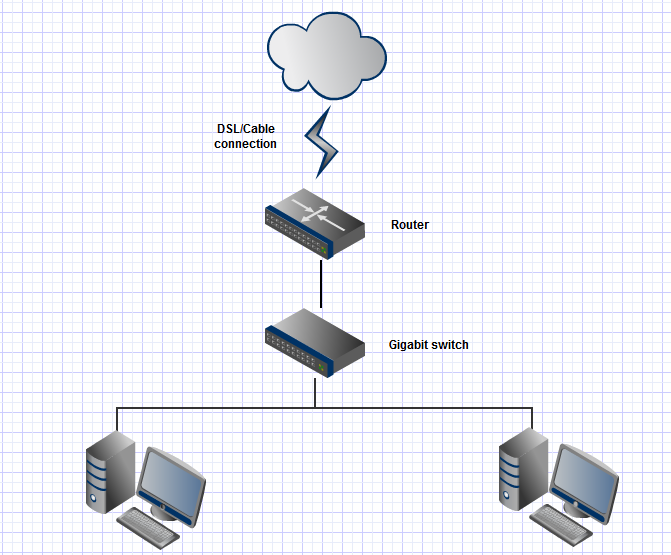 P.S. One thing that could make me wrong is if you had Gigabit already is if something is talking to the internet and was making the hard drive fight for resources (like a torrent downloading or seeding). Test what happens if you still have your router connected but you disconnect the internet side of it. If you get the fast speeds again using a 2nd cable won't help you, its your hard drive slowing you down, not the network.

Technically, the routing table determines which interface will be used, but that is not very relevant here. It is important to understand that network interfaces talk to other interfaces, not computers; the concept of a computer is just for our benefit. Although two network cards may be hooked up to the same machine, they are seperate interfaces with different addresses and as such, trying to communicate with the other one involves setting a different destination IP address.

Without the use of DHCP or static addresses, the secondary interfaces will probably be configured by their own operating systems to have a 'link-local address' in the range 169.254.0.0/16. You can view these using ipconfig. Normally, the operating system would also configure the routing table for these interfaces to be used to talk to other hosts in the same range, but if this fails, you can try to set IPs manually.

The Windows XP machine will then be accessible on either interface using different destination IPs, although a firewall may be overly selective. For example: ping 192.168.1.3 would use the connection via your router, whereas ping 169.254.123.45 would use the direct link.

Finally, I would like to add that only in extraordinary circumstances would this setup result in a significant increase in transfer speed. For simply copying files, you'll need extremely fast hard drives, dumb, outdated or broken network gear or unusually high loads to max out a 'normal' wired LAN connection.

Not the answer you're looking for? Browse other questions tagged windows-7 windows-xp networking router or ask your own question.