When working with images, I tend to start saving things as image_001.png and image_002.png for different versions of the same image. Being a programmer, I know that that isn't really a good way to do version control. I realize that there are some tools that I could use to do this such as git, but there is no simple way to view the history of a file using such a tool.

Is there version control software for images that allows you to view an image in it's current and previous states?

Beyond Compare has a plugin to diff images. It is really handy, and you should be able to use it with whatever source control system you are using.

If it's single user I can highly recommend FileHamster. Every time you save the file it creates a revision, and you can roll back as far as you've set your history to go.

Of course, with large images this can take an awful lot of space (but you can purge it once you're finished with the file).

Numbering the files and keeping them all has always worked best for me - at least for designs and reference graphics. It's easier to browse through the history and get at the previous versions directly from Photoshop (no need to use a VCS client). 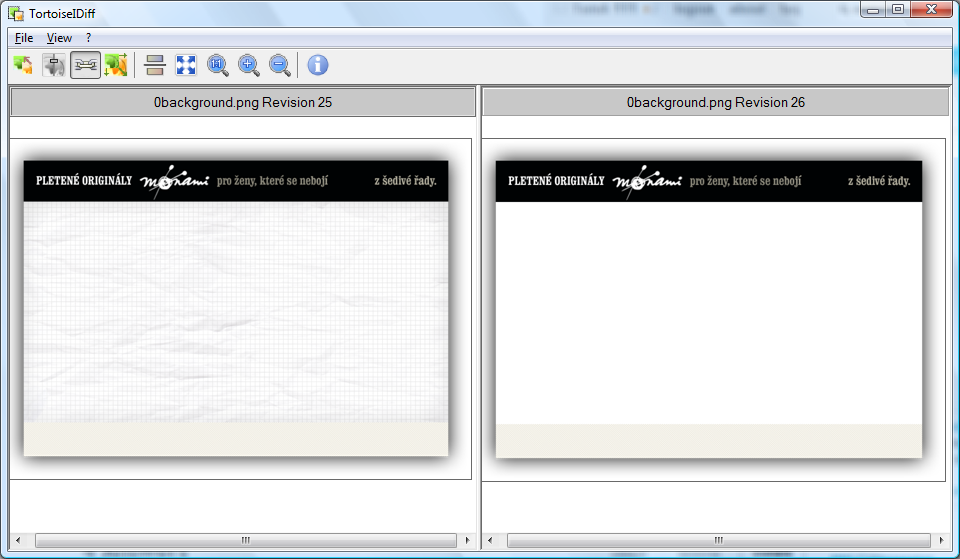 As for a media-oriented versioning and asset management system, check out Alienbrain.

Honestly, I'd use GIMP with layers, and just export to .jpg if I needed a flat image. This would give you the history as well as more control editing, and isn't that much more work to maintain.

The way I would do it would be to get a program that could compare two images, and then just use a regular source control tool like Subversion.

Popular clients for Subversion, like TortoiseSVN can be configured to use different programs to compare two versions of specific file types, so you could easily set it up to use that image-comparison program for .png files.

But then I'm a programmer, not an artist or designer.

You don't mention if you're working by yourself or on a team... assuming the former (and this technically works for the latter, just not as well) get a DropBox account. It handles back versions of all the files you store, you're account is only dinged for the space taken by the "current" version, and it gives you an off-site backup.

Plus, as a sole developer who is constantly bouncing from my laptop to my desktop, its been a God-send in keeping everything in sync.

I should also mention that it's a hell of a lot easier to set up and use than SVN et al.

The free account gets you 2GB of space, and you can pay for more space if needed.*

*As noted in the comment, DropBox has changed their policies a little since I first posted my answer. I can't seem to find a related notice in the blog, but this is the text of the e-mail I got:

The Dropbox team has been hard at work these past few months and we'd like to tell you about some upcoming changes and enhancements to the Dropbox service.

We're Changing Undo History Did you know that Dropbox automatically:

It's like having "undo" for all your files and folders.

Because of this, beginning August 1st, our new policy will be to keep 30 days of undo history. However, if you prefer, you can choose to have unlimited undo history at no cost.

Please choose one of the following links:

30 days of undo history is all I need

iPhone App Almost Here! In addition to this change to undo history, in the near future we'll be releasing our free iPhone app that will allow you to access your Dropbox on the go, view your files, save them to your phone, and even take photos that sync instantly to your Dropbox!

Performance Improvements and LAN Sync In addition to the iPhone app, we're also finishing up a new version of the Dropbox desktop software that features numerous performance improvements and our new "LAN sync" feature. LAN sync knows when Dropboxes are on the same network and will automatically exchange files directly between computers instead of downloading them from our servers - this makes sharing large files in an office environment much faster than was previously possible.

We've received great feedback from many of our users and are working on a lot of the stuff you've been asking for. Stay tuned and happy Dropboxing!

Thanks for using Dropbox! - The Dropbox Team

There's no indication from the e-mail that this option is only for paying members, but there's no indication that it isn't either. FWIW, I went with the paid option and have never looked back. Uses for DropBox are numerous - to include version control for my personal projects - and you'll be surprised how fast you run through 2GB... I'll stop the Ad now. :)

Straight-up version control for binary files is provided by Subversion.

For an image diff, though, I have no idea what that'd even look like.

A Photoshop specific (and not free) solution is Pixelnovel

It's a hosted solution that uses Subversion for version control.

It includes a Photoshop plugin that displays a timeline within Photoshop of previous versions of an image checked into Subversion.

If you don't need a hosted solution you can also purchase the Timeline Photoshop plugin separately to use with your own Subversion repository.

You may want to check out Oop! Backup. It will save down to the minute and also has some technology in it to only store the differences between files so that you do not use alot of backup space.

Also I would like to suggest my tool FolderTrack. It is an automatic personal version control system that would do exactly what you want.