My Windows 8 machine does not recognize a device which is connected via BlueTooth across a USB port. Apps are reporting the presence of COM1 and COM2, no others. I disconnected and reconnected my USB hub on which the bluetooth adapter is connected. I saw some other devices (also on that hub) recognized, as they began to appear in Windows explorer.

Since bluetooth was not appearing in the list of comports (on an app which sees the various COM ports all the time) I decided to remove the device, and then add it back in. This is exactly the procedure that I've followed fifty times or more; no problems before today.

Windows says that it is removing the device, then after awhile, tells me that it cannot remove the device.

We saw that very device connect to another computer and we saw that link deliver exactly the data that it should.

Sequence of clicks follows. Hope this is not over-populating the post with pics.

This is the bluetooth device

Clicking on it, he reports that he is offline 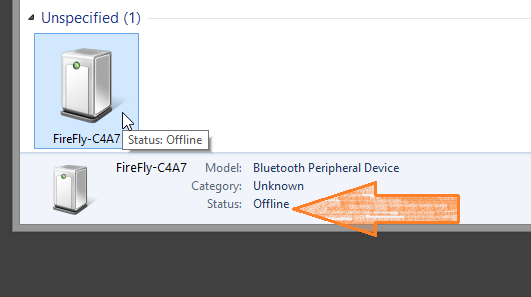 I right-click, and choose "Remove device"

Windows asks me to confirm the choice, and I click on "Yes"

Windows reports that he is removing the device

Hey I had the same problem. I followed the steps on this forum and they worked great.

After you have enabled the hidden devices, right-click on the bluetooth device you're having trouble with and click uninstall. Then go back to devices and remove the device.

I don't think that it's necessary to add the environment variable, but you can try if it doesn't work right away. You just need to go the the device manager and find it in there. Your Bluetooth devices may have installed more than one device, so make sure you get them all.

Only step 7 in above replies was needed & worked for me. My problem device (my bluetooth mouse which gave me "Remove Failed" when I tried to remove it) was shown grayed out in the device manager's list of hidden devices; I right clicked on it & chose "Uninstall" & it disappeared from the deivce manager's list, control panel's | Devices & Printers display, and also from "Change PC settings, Bluetooth's" list of devices.