While installing an OS, I am getting an error similar to:

VT-x/AMD-V hardware acceleration is not available on your system. Certain guests (e.g. OS/2 and QNX) require this feature and will fail to boot without it.

But, I am getting this error while starting to boot the OS: 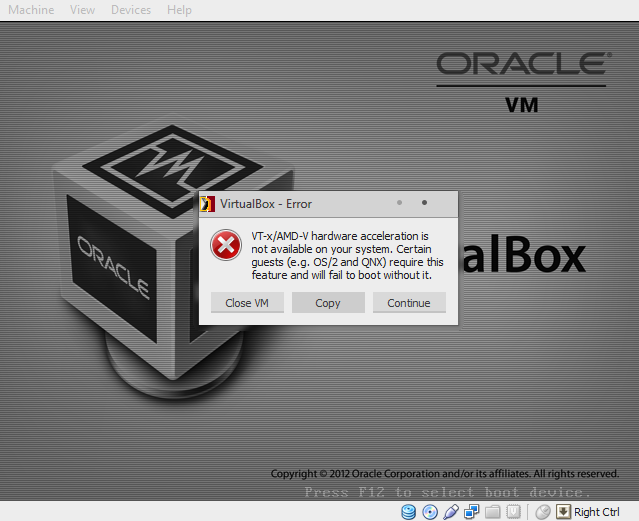 I am running Windows 7, any ideas?

VT-x/AMD-V support gets disabled for VirtualBox if you have Hyper-V installed. It gets enabled again when you uninstall Hyper-V. You can do that from an elevated command prompt by typing:

I suspect your CPU doesn't support the VT-x feature, as others have stated. As Joshua pointed out, the Intel website will help you determine the capabilities of your CPU. Specifically you should check the Ordering/Spec page, since different revisions of the same processor may have different features.

Basically if your E5300 isn't the SLGTL Spec, then it doesn't support VT-x. The only way to be sure is to find out your Spec Code, either from the box it was packaged in or physically looking at the CPU. You can also try programs such as CPU-Z or Intel® Processor Identification Utility which will tell you if VT-x is available, but I think only if the option is enabled in BIOS.

Updating your BIOS wouldn't necessarily solve the problem either, because the CPU would still have to have the VT-x feature. Now if you update your BIOS, and there is still no option available for enabling VT-x or hardware virtualization under the CPU settings, then most likely your CPU doesn't support the feature.

First, you should ALWAYS check the Intel Processor Documentation website ARK.INTEL.COM to see what your CPU supports. In this case, the Intel E5300 does not support Virtualization features. See this link:

The utility you are running also shows, albeit not very clearly, that you do not have those capabilities. The dashes (-) indicate that the feature is not available, whereas if you had an asterisk (*) they would. See the following link for reference.

It should still be able to run virtual machines, however it will be significantly slower than if you had VT support.

A BIOS update has caused the virtualization technology to be disabled in BIOS for me, which resulted in the above error.

Re-enabling the option in BIOS resolved the isue.

PS For AMD CPUs, the option is called SVM and is located deep under Advanced CPU Core settings or something like that.

Not the answer you're looking for? Browse other questions tagged virtualbox virtualization or ask your own question.