How do I clean my computer using isopropyl alcohol?

I bought a spray bottle of isopropyl alcohol, but I'm having a hard time to figure out how to use it to clean my computer.

My two concerns are:

I have tried to do some research, but it looks like there's not much out there. However, I did find this pretty good video: http://www.youtube.com/watch?v=BovgvppZX4k

Is there a proper way of cleaning computer components using isopropyl alcohol?

It should be okay to clean all of your computer with isopropyl alchohol. The alchohol vaporises at room temperature, so just make sure it is completely dry before connecting the power again. I'd be carefull which paper towels you use, as some paper towels tend to leave behind small traces of paper.

I usually use a cotton but when cleaning my computers.

If you're using high purity isopropyl alcohol, the advantages are that it is non conductive (being a non polar solvent), is not terribly reactive with the things you'd normally find in a computer, and generally dries fast. Water is a polar solvent, so you don't want to be using it in computers in larger quantities. 70% seems to be what people use, but you really want to be using 90% or better.

It's a very effective cleaner that at the quantities you use won't end up poisoning you, or dissolving your fingertips.

It's apparently safe to immerse entire devices in isopropyl alcohol—it seems to be a common way to save 'dead' cellphones—but I wouldn't recommend it as you'll see. It probably won't damage electronics; this thread on the HP calculator forums talks about immersing an entire calculator in alcohol, though with no follow up on whether it works. 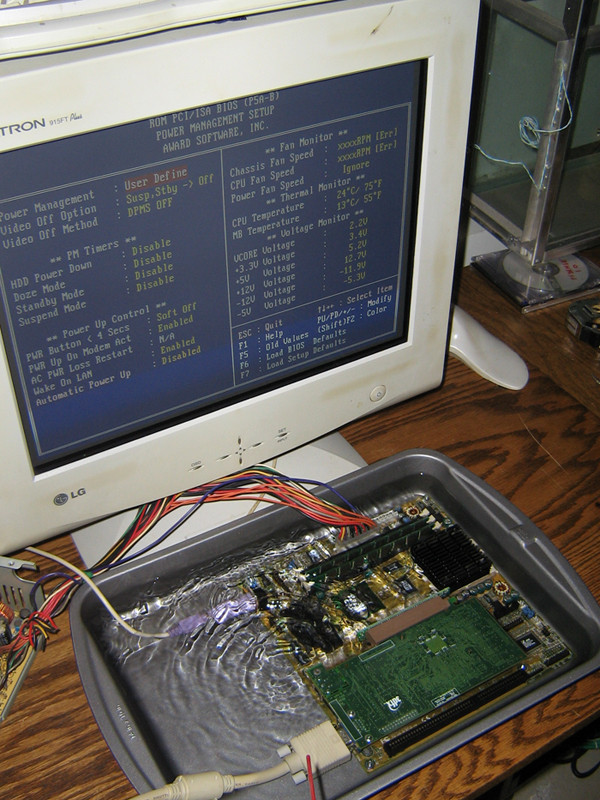 via here - no idea on the original source.

And this is allegedly an entire PC soaked in rubbing alcohol. (No, do not do this. isopropy alcohol is highly inflammable - it will evaporate into something that can be ignited at low temperature (13-15 degrees), and will catch fire at around 400 degrees C, and we do not want to be responsible for house fires. BAD BAD IDEA.) And since this is kinda being mentioned in the comments (Its potentially explosive under the right conditions - I do not recommend trying to blow up plastic water jugs unless you're a trained professional and/or a chemistry teacher).

It will, however, probably dissolve things like thermal paste (which can be conductive, especially in formulas that contain metal.) As such, you don't want to be using it in bulk (by spraying or dipping a whole panel.) Additionally, it's a bad idea to combine it with grease, since you might end up dissolving some minor thing—conductive stuff in CPU sockets is bad, as would be accidentally removing all the lube from the mechanical parts of a drive. It'll also loosen any stickers present on the hardware. Apparently it also does nasty things to plexiglass and Lucite, so test before you clean any plastic bits.

Applying it to a paper towel may leave lint (coffee filters seem to be a common lint-free alternative), and the computer has lots of bits that stick out which may catch and rip out bits of it. I've generally used the stuff for spot cleaning on a cotton swab for particularly nasty, hard to remove dirt. It's also pretty good for cleaning contact pins or dirty lenses on optical drives (often using a lense cleaner) VERY carefully. As such, while alcohol itself might be safe, be very sure to clean the surfaces again after you have removed the intended residue with something lint free.

You'll also want to be careful with a cleaning cloth, tissue or other cleaning material not to bend anything. Bent pins are a PITA.

There are also large, pre-moistened wipes—there's variations for screens and other surfaces—that also contain other substances. These are excellent for external cleaning, and are lint free.

In most cases, air dusters for electronics and a dry microfiber cloth for surfaces work for me. Save the alcohol for tough situations like cleaning off heat sink compound or stuck-on dirt.

TL;DR: "How do I clean a computer with isopropyl alcohol?"

Sparingly. Use it when you need to clean electrical contacts and need to remove tough-to-remove substances. It's tricky for bulk cleaning but works well with specific issues. It's definitely the thing to use when cleaning monitors, degreasing a touch screen (ewww) or for cleaning dirty contacts. In many cases an air duster may be safer since you aren't touching the contacts.

Sources: wikipedia - for the chemistry bits.

The boiled-down answers to your questions are :

Is is safe to use alcohol?

It can be used freely on the motherboard, fan and thermal paste, but not on the raw CPU, RAM, add-on cards, CMOS battery and of course disks.

What specific techniques should be applied?

If you strip-down from the motherboard all the above parts, you can even dunk it in a bath of 99 percent isopropyl alcohol.

Great precaution should be used for the CPU. The following extract is from Arctic Silver :

What are some concerns?

Do not use isopropyl alcohol for any other component than thermal paste, fans or the motherboard. Use alcohol gently applied to a cotton swab, paper towel or toothbrush - do not spray.

Use pure isopropyl alcohol or you risk leaving residues on the cleaned surface.

Some advice from Arctic Silver you might not think of :

Remove any rings or other jewelry that could scratch the surfaces being cleaned.
Coffee filters are excellent, inexpensive lint-free cloths.

Why should it, or shouldn't it be used?

It should be used for deep cleaning. For the occasional one use compressed air. Specialized materials, such as ArctiClean, might be better than pure isopropyl alcohol, but this hasn't been proved.

2) any parts which may have reaction with alcohol (high concentration) . some examples:

Share
Improve this answer
answered Sep 2, 2013 at 12:05
user218473user218473
Add a comment  |
Highly active question. Earn 10 reputation (not counting the association bonus) in order to answer this question. The reputation requirement helps protect this question from spam and non-answer activity.

Not the answer you're looking for? Browse other questions tagged cleaning or ask your own question.

0
Proper way to remove saliva from motherboard
1
Using rubber to rub contacts of RAM?
-1
Can thermal paste or alcohol damage the CPU/GPU or PCB inside a laptop?

6
Remove Possible Smoke Damage from a Desktop Computer
4
Can a photosensitive drum be damaged if cleaned with isopropyl alcohol?
3
Is isopropyl alcohol 90+% safe for cleaning copper heatsinks and processors?
2
How to clean/what to do about getting liquid form of compressed air cleaner on computer equipment?
0
Is 99 percent anhydrous isopropyl alcohol safe for gpu mobo etc?
0
Isopropyl alcohol and water droplets
0
Laptop Fan Makes Grinding Sound Every Two Months After Cleaning