Associate JPG with Irfanview in Windows 8

For a friend I needed / tried to change the default file association with "jpg":

Hmmm... why does it not let me pick d:\program\irfanview.exe as default program for jpg's in windows 8? (ps I changed all 4 occurences of "jpg" in the list with associated action "open")

update: I begin to assume that it has to do with Irfanview itself and Windows 8 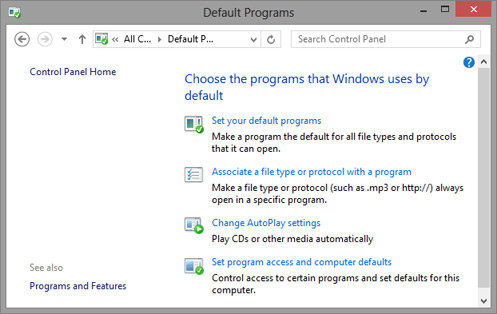 Now pick IrfanView and and choose which file types you want to associate.

Right click on a file type you want to associate with Irfanview. From the menu that appears chose open with. In the list of programs that appear choose Irfanviw. Make sure the little tick box at the top of the page is ticked (it says always open this type of file with this program) then finish.

It has to be done for every file type.

Not the answer you're looking for? Browse other questions tagged windows-8 file-association irfanview or ask your own question.