Do flash-drives/memory-cards fail silently or is there a warning/error?

Currently, my various data files (the files I create myself and are thus irreplaceable), are spread out over several directories on a couple of system. I want to consolidate them all into one place. I want to put them all onto a flash-drive (or even better a memory-card since it goes inside a laptop instead of sticking out of the side). Since they would all be in a single, small location, it makes them easier to back up as well as always available on any system I am using (which is good because then I always have something to work on).

My only concern is the nature of flash-memory. I’ve read countless articles and opinions on how flash-memory is reliable, is not reliable, does wear out, won’t wear out for most people, and so on. Unfortunately none of it is conclusive (certainly not for a broad range of devices).

To accommodate the nature of flash-memory, I have decided to make “regular” back-ups of the drive (though I am up to 5.5GB already, so I can only keep a couple at a time).

This leaves one potentially major issue: Corruption/notification of failure.

I can accept having to rely on making backups for peace of mind, but what I am dreading is that the drive will accept a write but then later on, when I try to read it, it turns out to be garbled.

So what I want to know is if there is a warning or error when a flash-drive/memory-card fails. Obviously it will attempt to remap dead cells as much as possible, but is corruption a real concern? Will users be told that the drive could not be written so that they can stop using it, or could we find out only after continuing to use it for a while a discover corrupted files—that may even make it into the backup! (Ideally, I’d like to know if there is a warning in general, but at least in Windows.)

(Finding an answer to this question is surprisingly difficult due to the nature of the query terms. The last one finds information about the delayed write failure message, but that goes for any removable drive and is not specific to flash-memory device. There is a similar question here that asks what happens when a flash-drive fails, but it is more along the lines of remapping cells instead of error-notification which is what I am asking; I want to know what happens after wear-leveling fails.)

I have had three HHDs fail on me in the past 8 years, and two SD cards die. All of them without and warning what so ever. The biggest give away with one of my HHDs was a sudden purring noise and then the thing exploded in my machine.

So sadly to answer the title of your question, no there is no warning for such errors.

That being said I believe it is not impossible to check for errors yourself manually from time to time. Take this article for instance.

The most basic of tests and the first one listed in the article are just talking about your standard DISKPART error checking, however the second one would bear more fruit in terms of purely checking for possible corruption of a device. while sadly the website is written in German that doesnt mean you cannot make use of the software it provides. It would in theory search your device for broken bits and report them.

Personally, why back them up to a SD card at all? With a file size of only 5gb or so you could use any one of the free online data back up storage sites such as dropbox, or google drive.

I was in your shoes a year ago. I was looking for a software that could flag weary memory cells as "old" or "bad" so they would not be used, but I found nothing.

As far as I know no Operating System will warn you about your SSDs condition.

What is different from S.M.A.R.T. which can report you about drives overall condition.

I recommend you Crystal Disk Info. It can inform you about the drive's overall state, temperature, when the drive is physically about to fail, etc. 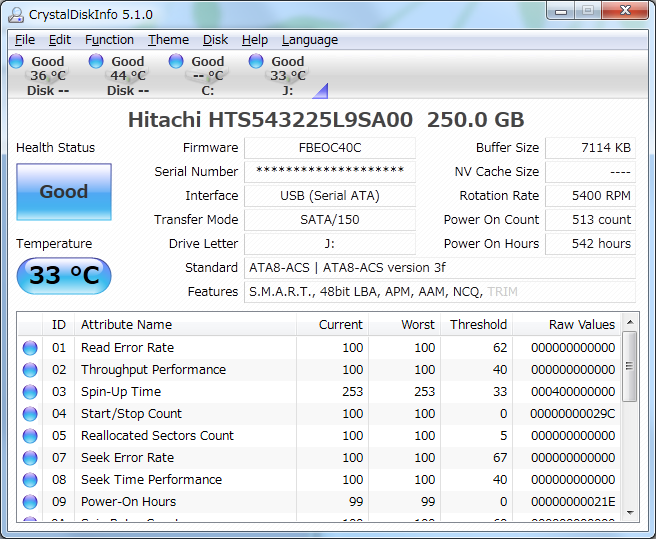 Not the answer you're looking for? Browse other questions tagged usb-flash-drive notifications data-loss-prevention or ask your own question.

4
Why am I seeing Zero errors in non-ECC RAM?
6
What happens when a flash drive wears out?
5
Cause of disk data corruption?

1
Is there an advantage to booting from a USB 3.0 Flash drive?
4
How to protect copying files out of flash memory?
4
Can zero-filling reset wear leveling of USB sticks / Flash drives?
3
Does flash-memory integrity depend on system resources while reading/writing (like CDs/DVDs)?
1
Flash based storage. Do i need to re-plug them back in to my PC from time to time? (Memory cards & SSD's)
7
What enables flash memory to be used for the OS in computers such as tablets?
0
What write patterns are “flash-friendly”?