Does ClassicShell.net truly lets one boot to the desktop on Windows 8?

Many people complain about the start screen of Windows 8, especially people used to desktop PCs, rather than tablets. I have read contradictory comments about ClassicShell letting one boot to the desktop. Does it really let one boot directly to a Windows 7 look-alike desktop rather than the typical Windows 8 'touch' screen?

P.S.: I don't have a PC with Windows 8 installed, otherwise, I would have tried it myself.

To answer your question, yes the Skip Metro screen option of Classic Shell works as advertised: 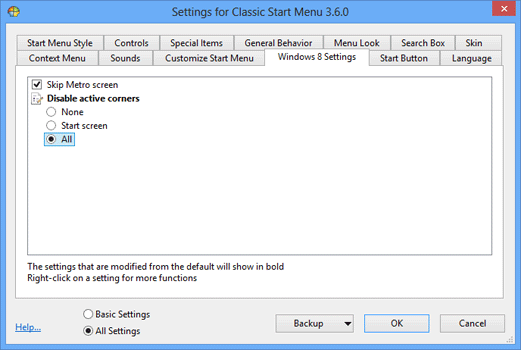 BTW, nothing much has changed about the desktop in Win8 (it's not a "look-alike desktop") except for the loss of the Start button and the Start Menu being replaced by the Start Screen. Even Windows/File Explorer (which you seem to be concerned about as per your other question) is pretty much the same; it's just been "ribbonified" like Office was.

A "fake" Start button will reappear in the free Windows 8.1 Update/Service Pack later this year (it will simply take you to the Start Screen), and Boot to Desktop will be an officially supported feature so there'll no longer be a need to use 3rd party apps just for this.

WinKey + D will give you the desktop (like windows 7 has) from the start screen of Windows 8.

Not the answer you're looking for? Browse other questions tagged windows-8 boot desktop or ask your own question.

9
How can I control the audio volume of a Modern-UI application?
5
Start button for Windows 8

4
Dual boot Windows 8 and Ubuntu?
3
Windows 8 shows orange screen with white stripes on boot
0
Unable to boot into Windows 8
2
Is it possible to completely turn off the TaskBar in Windows 8
2
Windows 8 wont boot after restart
0
Windows 8 remote desktop - can I see what the remote user sees?
3
Windows 10 fail to boot with 0xc0000001 error code