Why is my computer really slow despite having a considerable amount of free memory?

I have a Lenovo g560 3-4 years old, Intel i5, with 2GB ram and with a Geforce 310M. It always had some issues during startup or when starting a new program, but recently it just went crazy.

From the 2GB I always have 300-800 Mbs free, and the cached memory rarely goes above 300 (from 1.9gb maximum), the cpu performance is great (barely reaches 40 percent). Even like this, when I start or even just swap the screen to another bigger program the change of the windows becomes really slow and gradual (e.g. I see the 'pop-up' visual effect, but have to wait for the new windows, which appears only very gradually, first the edge of the frames, then other parts etc). At the same time the mouse cursor's movement is fine (but not the context-dependent changes), and I also got immediate response for the alt+tab combo (that is, the popup window with the opened applications). The lagging also stops sometimes when the program has already loaded in the window.

My suspicion would be that the hard drive causes the whole thing, because its led works a lot, and the laptop had always a considerable degree of lag when I had to manage files or start programs (especially compared to their 'loaded' speed). On the other hand, however, the resource manager does not really show too much disk usage (or I just do not see it)

I ran Winzip Utilites to optimize the computer (malware/junk search, disk defragmentation, driver updates, registry clean-up) but It made things even worse. I think the reason for this was that it turned on the Aero theme. When I changed it back to basic (after the Windows noticed the slowness and asked about that) it did some help, now it is 'just' slow.

Some resource monitor screenshot during lagging: 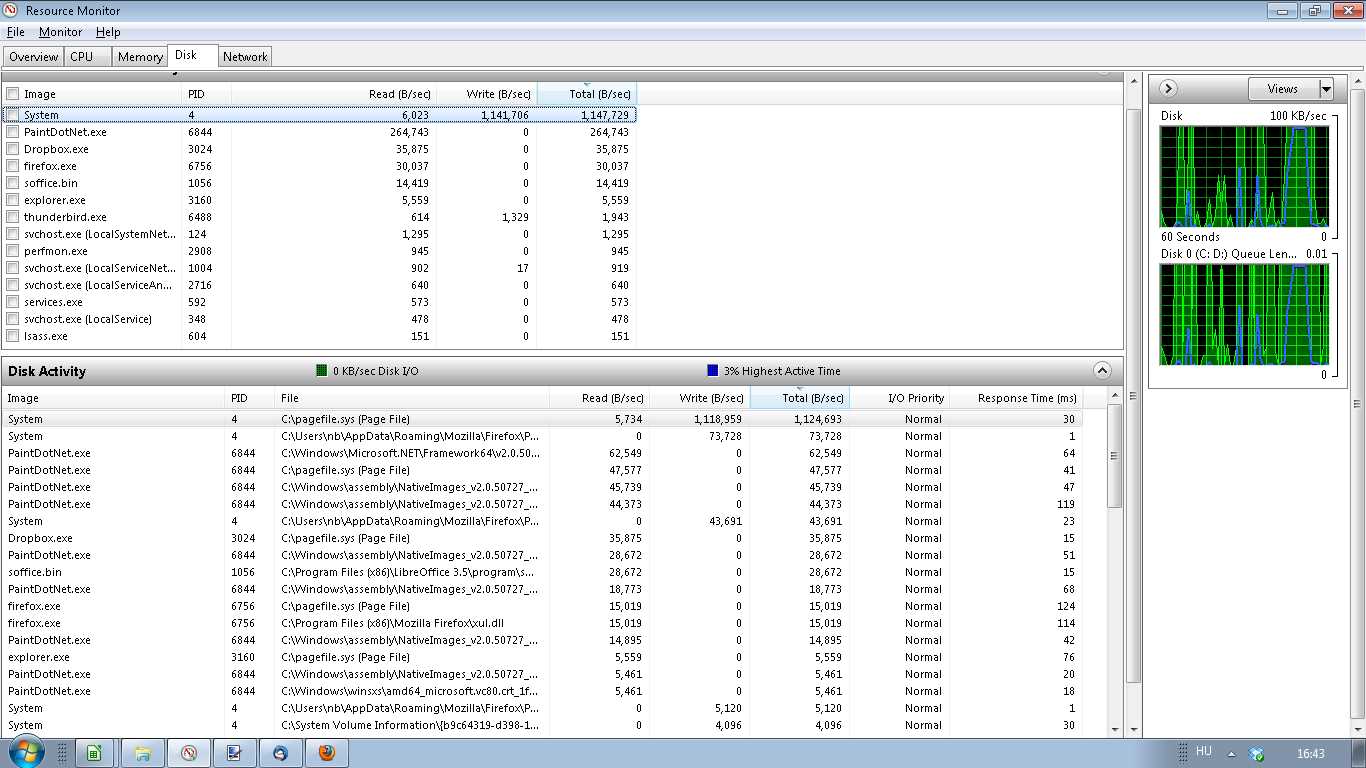 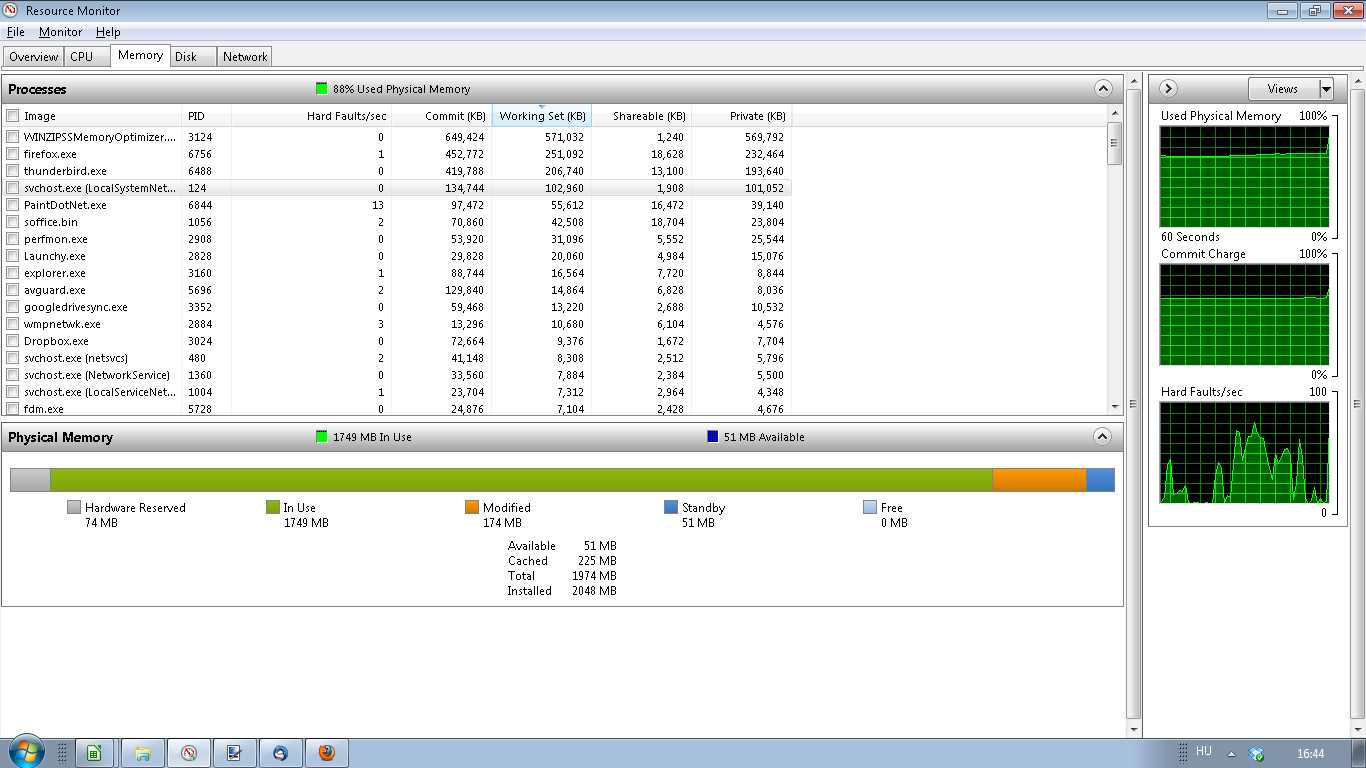 The disk activity is on the pagefile. You need more RAM.

Note that the Winzip memory optimiser is using more the 25% of the RAM. I'd get rid of that and any similar utilities before you investigate further.

2GB is not plenty of RAM. I consider that the minimum for medium usage PCs.

I would at minimum upgrade the drive. Either get a hybrid drive like the Seagate Momentus XT or an SSD. This alone should fix it, but a bump in RAM would also make a huge difference.

I ran Winzip Utilites to optimize the computer (malware/junk search, disk defragmentation, driver updates, registry clean-up) but It made things even worse.

Not surprising. These optimization programs are known for causing issues more than fixing them, especially when they are allowed to touch the registry. All they can do is guess and it can be bad. I would upgrade the hard drive and use a clean new image.

The most obvious solutions have already been given by others (add memory (2GB is really not enough for Win7), remove the 'memory optimizer)'.

Some other things that may help, permanently:

Some other things that may help a little, temporarily (for specific programs or speed in general):

Others will probably come up with more tips.

I am not sure if anyone has precisely answered all aspects of your question, so I want to provide those answers and done clear advise to move forward.

Why is your computer running slow?The answers are in your screenshots: the resource monitor shows that the system process is doing 99% of the disk writes, and it is writing to the pagefile almost exclusively.

This means that your system is trying to substitute slow 5400rpm disk as though it is RAM.To fix this, several steps are necessary and one or two steps are recommended. Step 1, back up your system. Step 2, uninstall the WinZip memory utility as most have commented correctly on its contribution to problem. Step 3, set the pagefile to zero, defrag the drive, then initialize the pagefile to a reasonable 3Gb then defrag again, include the pagefile in the defrag process.

Step 4, download and install the latest video driver from NVidia, not from Windows update.The cleanly defragged disk, proper functioning pagefile, correct drivers, and no poor memory utility will get you back to normal.

After that it you want additional performance then throw $35 at a second stick of RAM.

Since the disk is your bottleneck, how about trying a flash cache using Windows ReadyBoost(TM)? A cheap flash drive compatible with this gives you a nice boost, while you upgrade your drive.

2GB of RAM is a bit limited, as nowadays applications tend to be more greedy in RAM.

Actually when we see your Disk I/O activities are most due to the pagefile.sys (which is the disk cache file). It uses it when you don't have enough free RAM. Some has pointed out the 5400RPM disk, in fact, lower the speed the disk has, then the cache is.

In your memory screenshot, you can see that there is only 51MB (1749MB in use) of Free RAM memory.

Using a USB ReadyBoost is an idea, or upgrading your RAM memory to 4GB, and your problems will be solved.

For your information, the Winzip RAM Optimizer is the one who is eating up more than 25% of your RAM, just uninstall it as it is useless (instead of freeing your RAM), then your memory use will return to 1.2GB only. But as I said, upgrading your RAM will be a long-term better solution, as you installed the Winzip RAM optimizer for a reason.

So : - Uninstall the Winzip Optimizer - If better but not enough, upgrade your RAM to 4GB

Not the answer you're looking for? Browse other questions tagged windows-7 hard-drive memory performance lag or ask your own question.

4
ThinkPad Windows 7 laptop is often slow but only when plugged into AC power
10
How to diagnose right-click menu slowness?
2
Windows 7 running slowly despite having lots of CPU and memory free
1
Memory is full, but by whom?
0
Windows 7 running slowly despite having lots CPU and memory free
1
Slow laptop performance even with considerable free ram
3
Why are applications so slow on my powerful computer?