I have two monitors, a Viewsonic VA2231w-LED and an ACER H226HQL. The Viewsonic has only VGA and DVI connections, while the ACER has VGA, DVI and HDMI connectors. My problem stems from the fact that my video card, a GTX560Ti 448, only has 1 HDMI port and 2 DVI ports. I have a HDMI-DVI-D (single link) cable, which I keep plugged in my Viewsonic monitor (DVI in the monitor, HDMI in the computer). 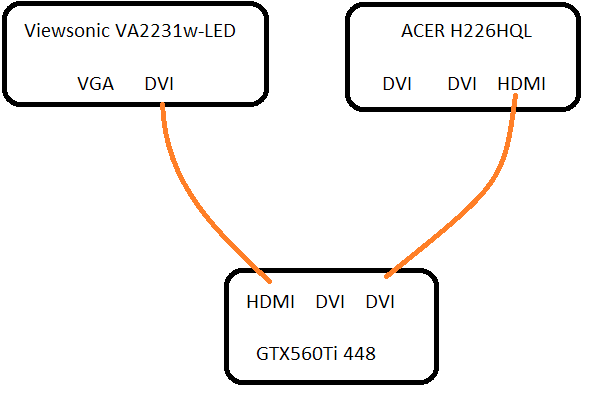 I bought a second HDMI-DVI-D (dual link) cable, and I plugged in the HDMI in my monitor and the DVI in my computer. Whenever I turn on the second monitor, I keep getting "No Signal", and I think the monitor keeps switching between HDMI and DVI inputs, because it keeps flickering. If I plug it in the other way around (DVI in the monitor and HDMI in the PC), it works fine. Same goes if I plug in a HDMI-HDMI cable - the monitor works just fine.

I think the problem is that the monitor keeps trying to use the HDMI input, since that's what's plugged in, but the vid card keeps sending DVI signals. Doesn't matter which DVI-D cable I use (single or dual link), the results are the same.

Is there a way to get past this without buying a new DVI-DVI cable, and just using the two HDMI-DVI cables I already own?

DVI can carry both digital and analog signal. Digital one is identical as with HDMI (that's why you can use passive adapters), but HDMI doesn't carry analog signal at all.

4
HDMI to DVI audio problem
0
Dual monitor set up using DVI and HDMI
0
DVI and DVI-to-HDMI fails to deliver signal to monitors when both are connected to a desktop
2
connecting DVI monitor to HDMI port
7
How do I switch the input for my monitor from DVI to HDMI from my PC?
10
Laptop HDMI to DVI monitor not working "no signal"
8
Can a VGA monitor be used with a DVI/HDMI graphics card?
0
DVI and Display