How do I press the Fn key using a PC keyboard on a Mac?

I am in a bit of a pickle. I am using a Dell keyboard with Mac OS X, and I would like access to my function keys while I'm using Terminal. A friend of mine has a new Mac keyboard which has a Fn key right on it, but when I press the same location on my keyboard my cursor simply turns into a question mark, apparently this is treated as the 'help' key from older model mac keyboards.

I know that I can change my function keys to work properly using an option from the Keyboard preference pane, but I don't want to do that because the ONLY time I need my function keys is when I'm in terminal, other times I am fine with things like volume adjustment etc. so I'd rather have a Fn key. I have also looked in "Modifier Keys . . .", and it allows you to redefine the caps lock, ctrl, alt and shift keys, but not assign anything to Fn (which is a shame, I use Caps Lock as my Ctrl and the 'real' Ctrl would be a perfect Fn key)

So...is there any way to 'press Fn' on older mac keyboards or on third party keyboards?

EDIT: To clarify, my dell keyboard does NOT have a Fn key on it. The place on my friends Mac keyboard that functions as an Fn key is an Insert key on mine.

You can use an application like ControllerMate to assign custom actions/scripts to keys and controllers.

The Function keys (F1, etc) behave as such (as opposed to brightness, volume, etc), regardless of what you set in the Keyboard preference pane. If you press “F Lock” the F keys simply do nothing. Luckily the F Lock remembers its setting across reboots.

There is no Fn modifier key as on the Mac keyboards.

KeyRemap4MacBook allows you to map the F keys to the usual brightness, volume, etc. but then you’d lose the normal F keys.

The Fn key on mac keyboards is a hardware driven feature.

What are you trying to accomplish?

I have a Microsoft Wireless keyboard attached to my MacBook Pro and can do much of what the function keys do from this -- once I installed the drivers. 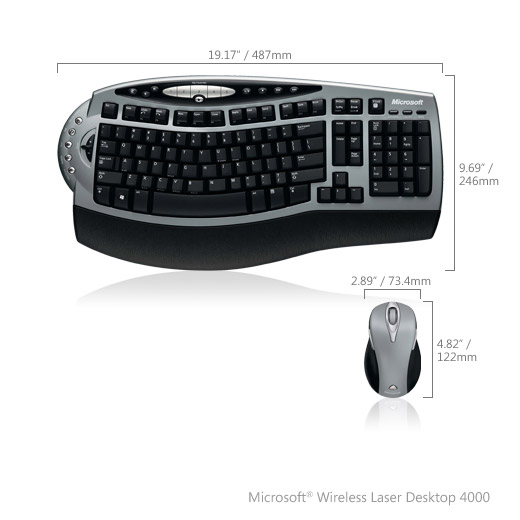 For example, I can:

(Note that in Keyboard Preferences, I have "Use all F1, F2, etc. keys as standard function keys" checked)

I landed here with the same problem. I have a Microsoft natural keyboard. I had tried everything and then I went into keyboard settings and checked Use all F1 F2 ETC as standard function keys.

I then went back to my keyboard and systematically went through combining one key with one FE that I knew worked with Exposé. I hit pay dirt when I hit the F lock key.

So I think the answer is - enable standard F key in Mac, find F-LOCK key on keyboard and enable it the same way you would enable CAP Locks.

Just tested over here with a Dell keyboard, and I was not able to turn off the F-keys from being the "function" key (eg. Expose, etc). That option seems only to be available with Apple branded keyboards....

So, without patching with a software driver, or hacking a plist... I don't see any way to do this...

I have changed this by opening: System Preferences -> keyboard -> keyboard-> Modifier keys -> select USB receiver and change the fn shortcut

In your microsoft keyboard simply press what ever key you intend to press. For example, on my Mac If I need to suspend Java script on a page, I need to press Fn + F8 key combo. Now a microsoft windows logitech key board attached to the mac, which is working fine, all I need to type is a single key F8 alone. It is working like that for me.