I was searching for wallpaper images on Google Images and I stumbled upon what appears to be a malicious website. I saw an interesting image in the search results and I clicked on the Visit Page link to visit the page that holds the image, hoping to find some interesting article or blog post.

At first the website seemed normal. But after clicking on a link on the main webpage, Firefox started opening new windows and what you see in the screenshot below is the content of one of the windows.

I thought the computer was about to crash because it almost stopped responding. At least four new windows were opened. But then I received the following two info messages telling me that the security settings caused the application to stop. Luckily... 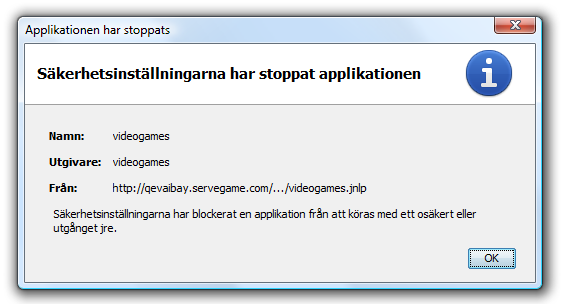 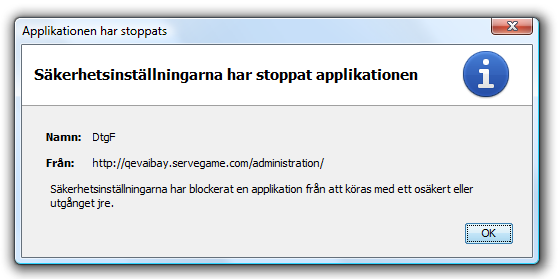 After clicking OK two times it stopped opening new windows. I quickly closed the tab holding the URL to the malicious website.

Should I be concerned about a possible infection now? Or was the infection diverted? And what program is responsible for these dialog boxes? Is this part of a Windows or Firefox security feature?

And what program is responsible for these dialog boxes? Is this part of a Windows or Firefox security feature?

It's part of neither. If you'd done us the favour of translating the error messages it would have been easier and I wouldn't have had to resort to an online translator. Anyway, the last word on the dialog very clearly mentions which program is responsible, i.e. JRE.

Should I be concerned about a possible infection now? Or was the infection diverted?

For the benefit of others, this is what the message translates to in English:

Presumably the applet was indeed blocked as stated and no malicious code got executed on your system. Even if code did get executed perhaps there's a chance it wasn't able to break out of the Java VM's sandbox and affect your system. Of course, given Java's poor security track record there's no guarantee an exploit hasn't compromised your system despite those messages.

I'd suggest: i) thoroughly scanning your system with multiple anti-malware tools, and ii) disabling Java if you don't use it or at the very least update. What are you doing running an insecure/expired JRE anyway?

For extra credit you may want to read the Setting the Security Level of the Java Client article, which states the reason for the dialog:

Ensuring the Most Secure JRE

Before the browser plugin software attempts to run a Java app, it verifies that the JRE version is at or above the security baseline for that family and that the age of the JRE is recent. If the JRE is deemed expired or insecure, additional security warnings are displayed. In most of these dialogs, the user has the option to block running the app, to continue running the app, or to go to java.com to download the latest release.

The JRE relies on periodic checks with an Oracle Server to determine if it (the JRE) is still considered up-to-date with all the available security fixes (above the security baseline). In the past, if the JRE was unable to contact the Oracle Server, it continued to behave as though it is still the most recent version with regard to security for an indefinite period.

To avoid this problem, a secondary mechanism, which does not rely on external communication, has been added to the JDK 7u10 release. From this release onwards all JREs will contain a hard-coded expiration date. The expiration date is calculated to end after the scheduled release of the next Critical Patch Update.

This means that JREs that are unable to contact Oracle Servers for an extended period of time, will now start offering additional protection after a reasonable period and will not continue to behave as if they were still up-to-date with security fixes.

Not the answer you're looking for? Browse other questions tagged firefox windows-vista security virus or ask your own question.

8
Middle click tab opening stopped working in Firefox
1
Firefox won't open on home page
2
How to block all cross-site image requests originating for a specific website in Firefox?
21
Is it possible to get old suggestion system back in Firefox 43.0?
5
What are the "hidden" redirect pages some websites use when clicking on links?
1
Forcing Firefox to install/Download Addons from "addons.mozilla.org" ONLY