I have a 150 GB disk file (.vmdk, non pre-allocated) where my virtual machine is stored.

The file is currently 20 GB, but it is growing everyday, even though I'm not storing anything new in the guest file system.

I have been looking for hours for a way to reduce the maximum size of this disk, so that it never gets to 150 GB (I'd like to set the limit to 30 GB, and see what happens when the VM reaches this size).

Although this task seems technically quite simple (there is no tricky shrinking involved, just a simple change of size limit), I'm really out of ideas here...

Is there a solution at all ?

The usual procedure for reducing the size of a .vmdk disk is to:

Converting the disk from growable to preallocated could stop its growing. This can be done using vmware-vdiskmanager with the -t parameter whose values are:

The following command will convert the .vmdk from growable to preallocated :

If you wish to change the size of the disk, this should be done while the disk is still in growable format (examples here).

The file is currently 20GB, but it is growing everyday, even though I'm not storing anything new in the guest file system.

Because the OS and its application programs temporarily use lots of disk space for temporary files, page files, hibernate file and config files. Once they get deleted depending on the policy of the OS new sectors on disk are used at the next time. The VM allocate storage for the virtual disk from real disk whenever a new sector is used in the virtual disk. As the sector on virtual disk are always not reused by guest OS the VM thinks its a disk usage and give space from real disk and this will lead to growing virtual disk image.

Your question title is less likely to be solved as using such a tool without inspection of image may lead to total disaster. But you can prevent growing of the image beyond 30GB. There are many way to achieve the goal.

A. Use only 30GB partitioned and leave remaining as free space. If you already partitioned more space then you need to shrink/delete it, the create a new partition then dump it with zeros and punch it as described by @harrymc . As the space in unpartitioned area is never used virtual disk will never grow beyond 30GB.

B. Create a snapshot and restore to it after usage. After creating snapshot VM store data into a new image file. If you restore to it, without saving or making new snapshots, all changed data is deleted and thus space is freed.

C. Create a new virtual disk of maximum 30GB, add it as a new disk into your current virtual machine, move all data to the new virtual disk using a backup tool. You may use a live Linux for the cloning.

Recommended option is A

Why not simply set the size of the disk involved to 30GB from 150GB.

Why did you create a 150GB (thin partition) if you did not have the space to support it at maximum size? Seems like this is just asking for trouble.

There is a roundabout way of using VMWare Converter to create a new VM and smaller VMDK size, then convert the original VMDK to the newly created, smaller VMDK. 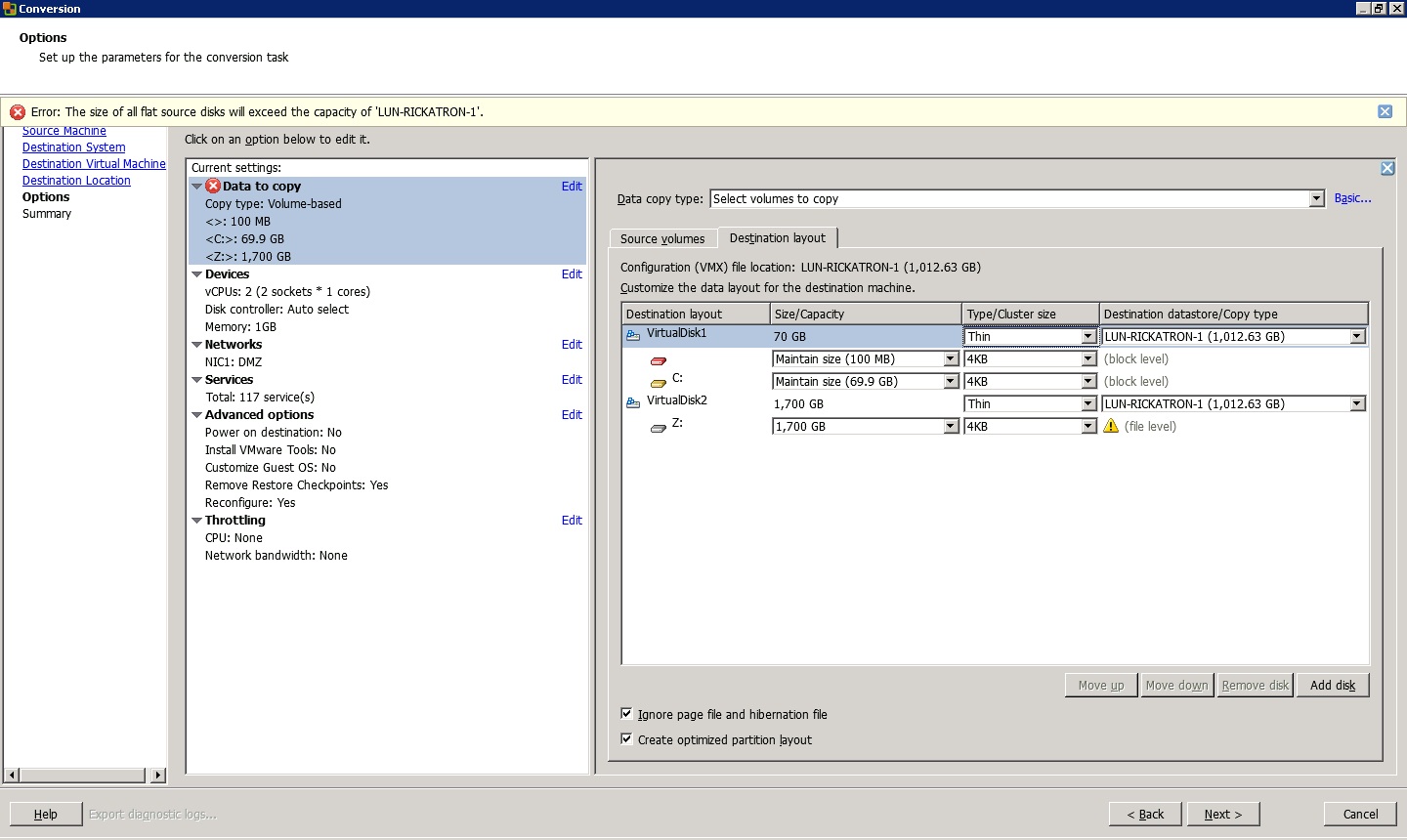 Note that any changes to the VMDK size will also need a corresponding update to the partition table.

In a Windows virtual machine, you must first run a disk defragment from within Windows. Defragmenting within Windows ensures that all of the used spaces are contiguous. You can then reduce the size of the virtual disk.

To shrink the virtual disk:

Open the terminal and run this command:

Note: In Workstation 9.x (Windows) and above, shrinking is automatically done while Cleaning up the disk. Therefore, this option is removed from VMware Tools Panel. Go to VM > Manage > Clean up Disks. This is not available in Linux version of VMware Workstation 9.x and later.

Click the Shrink tab. Select the drive you want to shrink. Click Prepare to Shrink, then follow the onscreen instructions. Caution: Do not shut down your virtual machine or the host machine while the disk is shrinking. Also, do not try to cancel the process. Interrupting this process can cause irreparable damage to your virtual disk and you may not be able to start your virtual machine again.

From VMWare Knowledge Base

The answer of @harrym is pretty good, but it actually does not answer the question. The OP wants to reduce the maximum size. The problem is the hypervisor does not know how much of the presented size (aka maximum size) is indeed used by the OS. The compaction (vmware-vdiskmakager -k) applies to a growable vmdk. It does nothing on preallocated one's.

So the steps to shrink the disk are:

The first step involves a procedure from within the VM and varies with guest OS. The second step could be supported by the vmware commands but I haven't found a profound way of doing so. Thus the hacky approach.

Here is a non so quick (due to large data moving involved) and dirty solution that did the trick. We will need to have available space equal to the maximum device size.

WARNING: Remember to backup important data before any operation !!

Not the answer you're looking for? Browse other questions tagged virtual-machine vmware-workstation or ask your own question.

0
Shrink the size of a dynamically sized VMWare vmdk from maximum to current
1
How can I shrink a VMware multi-volume disk?

1
Is it possible to use a VMware image created on WindowsXP 32bits on MacOS X?
2
How to open existing virtual machine with multiple .vmdk files
3
vmdk file too large but guest os is small
4
How to decrease the virtual maximum size of a VMware Workstation VMDK hard disk file?
0
Repeatedly corrupted snapshots on vmware workstation