Python installer: "A DLL required for this install to complete could not be run"

There is a problem with this Windows installer package. A DLL required for this install to complete could not be run. Contact your package vendor.

I have freshly downloaded the installer package from Python.org several times but it is giving the same error repeatedly.

Here is a picture of the error message as it appears while installing: 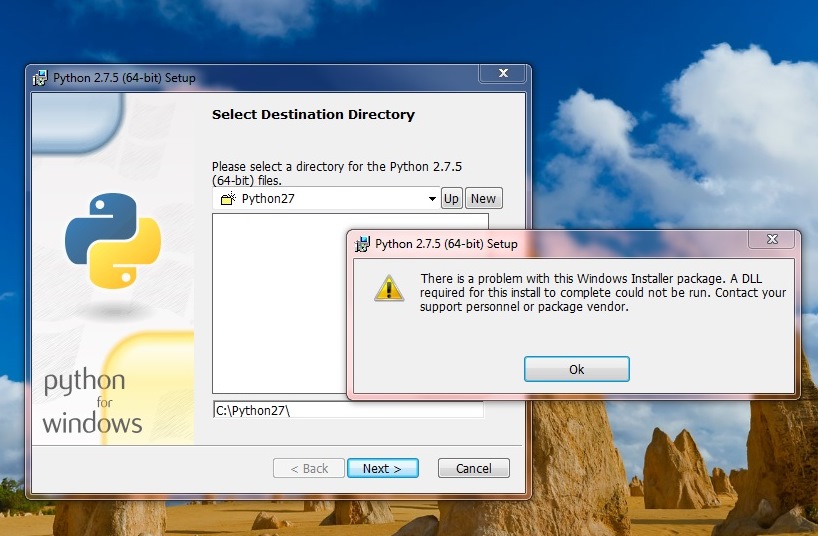 I installed an older version (Python 3.4.3) and it worked fine.

(Fully updated Windows 8.1 64-bit PC, and I tried several of the newer versions, none worked. I also ran a Virus scan, and disabled Antivirus, same error.)

%temp% on run window then Go after That Temp folder - Go to organize- propertiese - share - everyone .Then again Run installation it will work100%

I was just trying to install 32 bit version on x64. Tried again with correct version and problem solved.

Once I had downloaded the 64-bit version I installed with no issues.

Not the answer you're looking for? Browse other questions tagged windows-7 windows installation python or ask your own question.

0
Can't uninstall an application. Are there any alternatives?
1
Installing applications
19
Java issue (nonexistent Java Runtime)
1
MySQL 5.5 installation error: this installation package could not be opened
3
Error while removing Java on Windows 7
2
d3dx10_43.dll is either not designed to run on Windows or it contains an error
3
Unable to install Python on Windows 8
1
Can't uninstall Python 2.7.9 on Windows 10
0
Windows PowerShell returns error for "python --version" even though I have it installed