The card has an eight pin (150w) and six pin (75w) socket, and I'm fairly sure both need to be connected. However, I can only free two four-pin molex plugs. I am using a four pin ATX cable to power the motherboard and two SATA power cables for the CD-ROM and HDD.

What can I do? I could use molex splitters, but how do I prevent overdraw on any individual rail? If I split the two molex four pins, could I have them share the eight pin and six pin power connect ions equally?

A PSU often come with several connectors. Usually there are plugs for:

On your case items 3 and 5 are the most important.

Either your PSU has one or more 6/8 pins connectors to feed a graphical card, or you will need to use something to transform the molex connctors into extra PCI-e power connectors.

Such a device could look as simple as this: 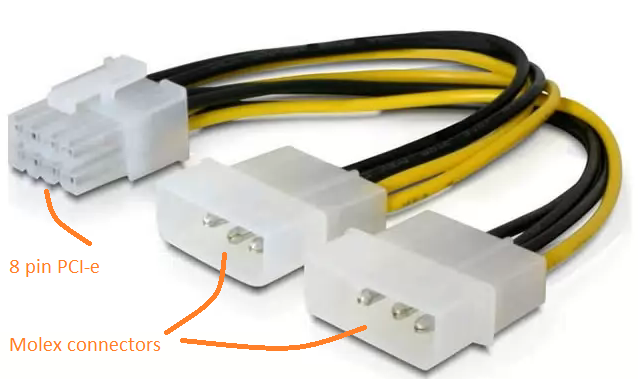 I could use molex splitters, but how do I prevent overdraw on any individual rail?

Go to the webpages of your PSU's manufacturers webpage. Check the PSU's manual.
If it only has a single +12 rail and it outputs enough power to feed the graphical card (once again, use the manual. How much does the card need, how much does the PSU output?) then there is nothing to worry about.

If the PSU has multiple +12 rails then these should be marked on the PSU, or at least mentioned in the manual.

If I split the two molex four pins, could I have them share the eight pin and six pin power connect ions equally?

This depends on your PSU and its internal wiring. The information who got "a 650w PSU" simple is not enough to answer that,

What can I do? 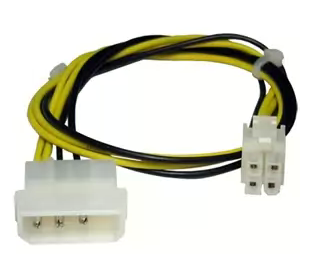 4 pin to molex to 6 pin PCI-e is rather kludgy though.

Not the answer you're looking for? Browse other questions tagged graphics-card power-supply or ask your own question.