Since Google Chrome 28 update ALL extensions have stopped working

I have just rebooted my machine, restarted Chrome, and been auto-updated to Chrome 28 (with the yellow menu button). And now all my extensions have stopped working?!

All are the latest version as far as I can tell. Trying to open any of these extensions results in a "This web page has not been found" message (as in the screenshot)?! 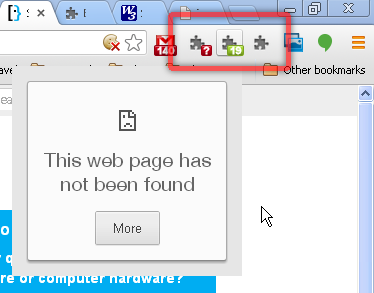 Any idea how to make them work again? I can't seem to find anything on the Google, so maybe it's just me?!

EDIT: I initially stated it was just the non-Google extensions that had stopped working, however, it is in fact ALL extensions. I naively thought that because the Google extensions still show the correct icon on the toolbar they were OK, but they are not. They report the same error when trying to open them.

I believe reinstall your extensions should solve your problem.

Now, where does TooManyTabs store it's data..

For you export your data stored do: