Is there a way to arrange windows within the same application in the taskbar of Windows 7?

Right now we can freely adjust each application's position in the taskbar, but within the app itself the windows can't be reordered, for example multiple windows of firefox or chrome.

You can do this with 7 Taskbar Tweaker.

Just check the box Drag to reorder under Thumbnails section: 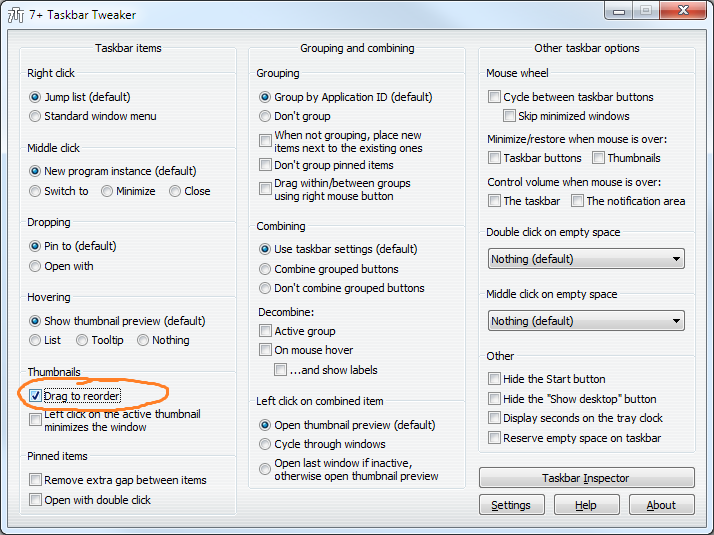 The previously mentioned Taskbar Shuffle doesn't support Windows 7 yet, to my knowledge.

This is possible, but quite hacky.

Lets consider, you have three windows of the same application: A, B and C. You want them to be shown on task bar as [A][B][C], while they are shown in some other order. To achieve this do the following:

This method will probably kill all Windows Explorer windows. If you need to preserve them, do the following:

No. Unfortunately, it is not possible yet. Opened instances of the same application are combined and their live thumbnails cannot be reordered.

Note that even if you disable Combine (Right-Click Taskbar -> Properties -> Taskbar panel -> Taskbar Buttons dropdown), an application with several instances opened will still move as one group.

You can use RBTray to hide all windows and then show them in the order as you wanted.

If you just want to re-order firefox or chrome, hitting F11 to put a browser into full screen mode will put that browser window to the far right of the list. It can be a little tedious, but if you want one specific window to be on the far left, just F11 all of the browser windows except the one you want on the left.

0
Windows rearranging icons on taskbar
2
How to quickly close multiple windows from the same application via the taskbar?
2
Manually reordering windows taskbar items in same application in Windows 10