OK so I have my Raspberry Pi running a DNS server (dnsmasq), and I have my router set up to use it as the DNS server for the whole network. This was working perfectly until a few hours ago when I added some stuff to the hosts file (all valid). Now, for example, going to local.dev in chrome gives "Oops! Google Chrome could not find local.dev"... Even apple.com (which isn't even mentioned in the hosts file) is invalid. That's the only non-hosts site I've found that's still invalid

THe really weird thing is, dig apple.com from one of my network computers (inside the network, and accessing my raspberry pi DNS server) returns WORKING IP addresses, which work in chrome! Screenshot shows dig apple.com results.. Any help would be great, thanks 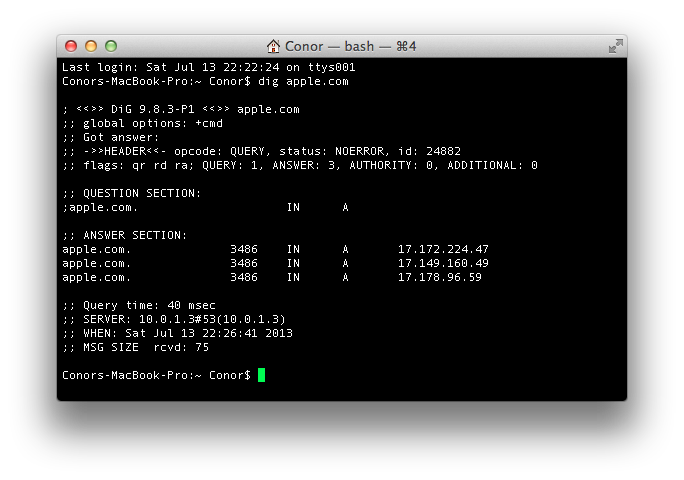 I have restored the hosts file but the same problem persists. Very strange

Is the problem still unsolved? Have you restarted everything after you made the change(s), including the dnsmasq service, the browser, and/or even the entire system?

To me, I have to restart the dnsmasq service to make it listen to the correct address

Not the answer you're looking for? Browse other questions tagged networking dns dhcp raspberry-pi dnsmasq or ask your own question.

1
Locate Host Name on LAN with DNSMasq
10
resolv.conf keeps getting overwritten when dnsmasq is restarted, breaking dnsmasq
3
Ubuntu only resolves DNS when the router's IP address is present in the DNS servers list
2
How do I configure DNS when sharing a VPN connection in linux?
2
How to route DNS requests to a specific DNS server?
2
How to change my DNS server provider permanently?
2
DNS server merging
0
dnsmasq: forward local domain when not on dhcp
1
DNS server for home network without using resolv.conf, google dns, nor transfers