Run a batch file in a completely hidden way

I'm looking for some way to run a batch file (.bat) without anything visible to the user (no window, no taskbar name, .etc..).

I don't want to use some program to do that, I'm looking for something cleaner. I've found a solution that uses VBScript, but I don't really like using VBS, either.

Save this one line of text as file invisible.vbs:

To run any program or batch file invisibly, use it like this:

Use a command line tool to silently launch a process : Quiet, hidecon or hideexec.

To Hide batch files or command files or any files.... Use Windows XP built in IExpress.exe utility to build a .EXE out of the batch file. When using IExpress make sure you check the run hidden option and check mark all the boxes about not showing anything. After you create your .exe place it in whatever run command folder you choose and you will never see it come up.

Download and copy nircmd.exe to your %systemroot%\system32 folder, then add this command to first line of your batch:

You can also change the title of your batch file terminal window by title command to avoid from hiding all cmd windows, like this:

Run the script via an at job without making it interactive:

Another solution, if you don't mind installing something like Python, you could simply create a script and run it with pythonw (the linked version for GUI operations). Since you aren't using any graphical APIs, the window will not show. Simply use calls to os.system() and it will mimic a batch script, as it is the same as typing the strings into the command line.

If your Batch File can fit into one line and so many characters, then just use a Shortcut by right clicking inside a folder put in a random directory, and skip through the rest of the wizard, and lastly right click on the shortcut just created and click properties and under target, input what you would usually put in a bat file. And Bobs your uncle!

You can run it minimized easily.

You can also create an AutoHotkey script:

Using Windows7, you can use the "Scheduled Task" control panel to schedule a batch file to run in the background invisibly with specified permissions and even as the "SYSTEM" account. See screenshot below:

Furthermore, although with not as many capabilities, you can also create a invisible batch script task like this from the command line using the "AT.exe" command without the '/interactive' option.

The excellent Bat To Exe Converter will convert your .bat or .cmd file to an .exe file. 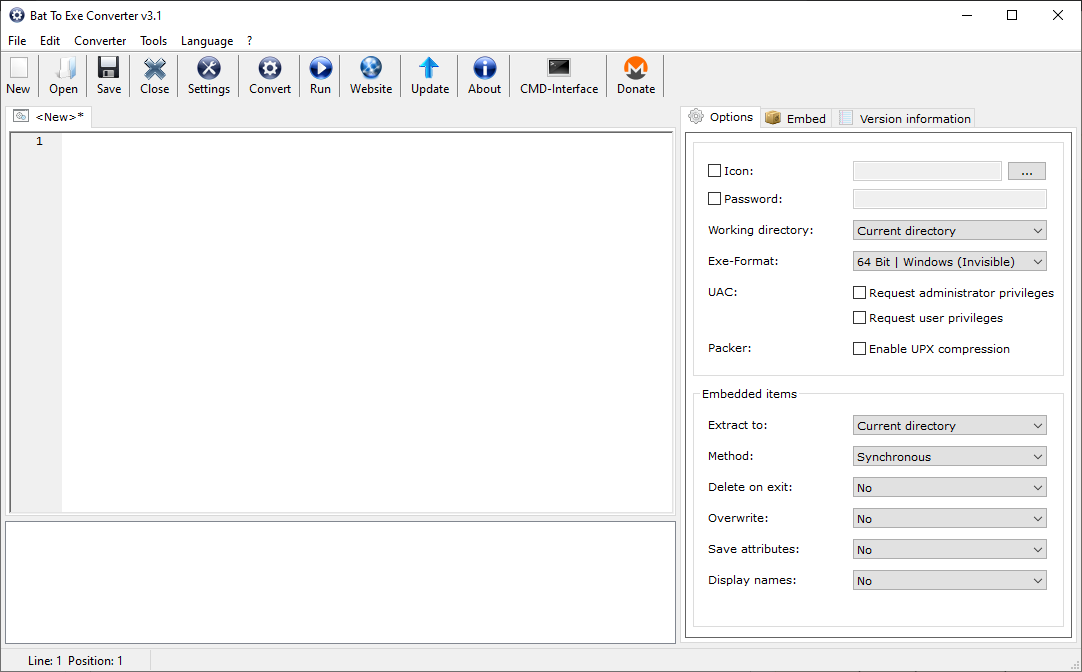 It has a simple UI. You can choose not to have a console window by selecting an Exe Format of XX Bit | Windows (Invisible) option. Also, it allows you to assign an icon, set a password and several other options.

Despite I've already answered this here's another approach. The different here's that the batch script can self-hide itself during it's run.You'll need two additional scripts though - windowMode.bat and getCMDPid.bat (both are containing .net code). Here how then can be used:

YET ANOTHER way, from C/C++, is to use the CreateProcess function with the CREATE_NO_WINDOW flag. It has a lot of extra power not shown here. This is just the minimum you need to replace system() or the _spawn() family.

I did it successfully with nircmd this way:

Now you will have a .exe file that after you doble click on it and install it, your .bat will run totally hidden.

Adding my answer here from another post since it was a duplicate and I don't see this solution here so now there are 17 different answers for how you can run a batch file hidden. I will delete my answer on that post at some point in the near future.

Create your batch script with your batch logic and commands in it, and then create a new file with .VBS extension, use the below logic (example I provided below) and just plug in the full path to your .CMD or .BAT file with the PING -t <IPAddress>, etc. commands so it executes the batch in a hidden manner not showing the command window when it is executed.

Where the logic in the example below specifies C:\Folder\BatchFileName.cmd change that to point to the batch script with your commands you are running manually, etc. now.

Save the .VBS file and schedule it with Task Scheduler Problems scheduling a task on windows7 to run on an indefinite schedule for your needs.

Otherwise, just double-click on the .VBS file to run the infinite PING command you put in the batch file you point it to as-needed.

NOTE: I believe this is where I got this script logic from but it works reliably for the same purpose you need here which is to ensure the command window is hidden when a batch file is run Server Fault Source

Note: This looks for a bat file with the same name. You can change bat to cmd in script, if needed with this example.

I'm created RunApp to do such a job and also using it in my production env, hope it's helps.

You do not need to do any special.

If you are running the batch files from a windows service, they should be hidden by default unless you enable the "Allow service to interact with desktop" option on the service.

I needed to hide the window for a batch file called from an explorer context menu, and also needed to add quotes on the parameter. None of the answers worked for me, so I'm adding my own solution.

I had this on the registry "command" for an explorer context menu:

So to replace it I had to create a vbs like this:

This works for windows 8 (possibly others)