How to make a Windows User Acount that can not change anything?

what I would like to accomplish on my home PC is something similar to what my account at my University's computers does. I would like to have an account with almost no privileges. The only things I want the account to be allowed is to use already installed software, temporarily save stuff on the computer, but in a manner that every changes made by the user will be discarded after reboot unless it's in a specified folder which would be the only folder where the user would really be allowed to save and keep data on (for example in My Documents) and that's it. Everything else I want him to only have read access for.

If someone could explain to me how I can do that I would be so grateful, and if it could be explained for Windows 7 I would prefer, but XP or Vista will also do.

you may want to have a look Faronics DeepFreeze or Windows SteadyState.

These are applications to protect the core operating system and configuration files on a computer by restoring the system back to its original configuration each time the computer restarts.

Steadystate only works for XP & Vista.

I would also recommend using Microsoft's free SteadyState, which works with Windows XP or Vista. According to Paul Thurrott of SuperSite for Windows in Apr 2009, "Microsoft will not be releasing a Windows 7 variant of the Steady State/Shared Computer Toolkit any time soon to compensate. (Guest Mode was based on this technology.) That doesn't mean that one won't happen eventually."

I would recommend StorageCraft™ ShadowUser™.

StorageCraft technology captures a snapshot of your volume(s) and runs an exact duplicate in a virtual PC or server state. This virtual state, called ShadowMode™, allows the user to use the PC or server as normal, but without premanently writing system changes to the hard drive. 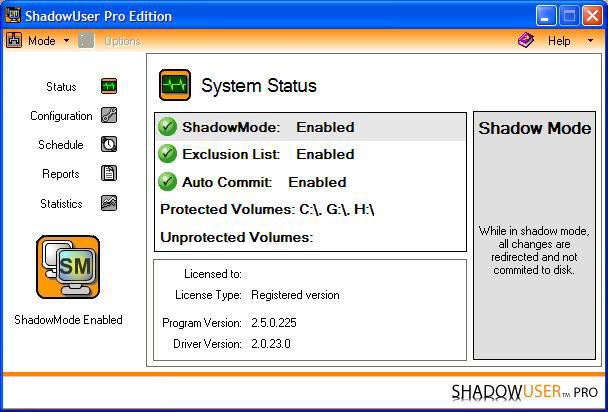 Not the answer you're looking for? Browse other questions tagged windows-7 windows permissions user-accounts or ask your own question.

0
Vista won't let me save a backup of applicationHost.config
1
How can I restrict a user from all but one specific drive partition (yet still use the computer)?
0
How do I disallow shared folder when user is not logged in windows 7?
1
How to fix Windows 10 permission issues after copying User data to new profile
2
How to Create User with specific folder c:\users\name in Windows 10 for secondary microsoft family account