How to use different scaling for every monitor?

One of the new features in Windows 8.1 is the new "Desktop display scaling", which allows user to configure scaling per monitor. I've been trying to get this working in preview but with no success. If I configure the scaling, it always affects all of my monitors.

I have two monitors, the main one with a higher resolution and the secondary with "normal" resolution. The secondary monitor is used in portrait mode. I would like to configure the main monitor's scaling as the text is currently too small.

Here's how things look at the configuration screen by default: 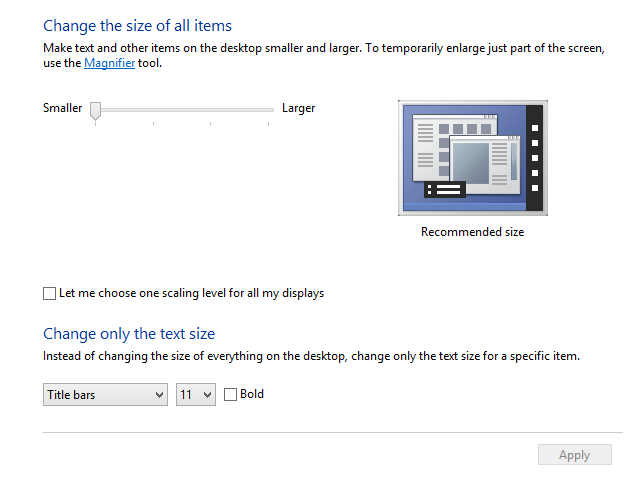 Now if I adjust the scaling, click apply and do relogin, everything is bigger. On both of my monitors. I haven't clicked the "Let me choose one scaling level for all my displays", but still the slider seems to affect both of them.

If I check the "Let me choose one scaling level", the UI changes to look similar to what we have in Windows 8: 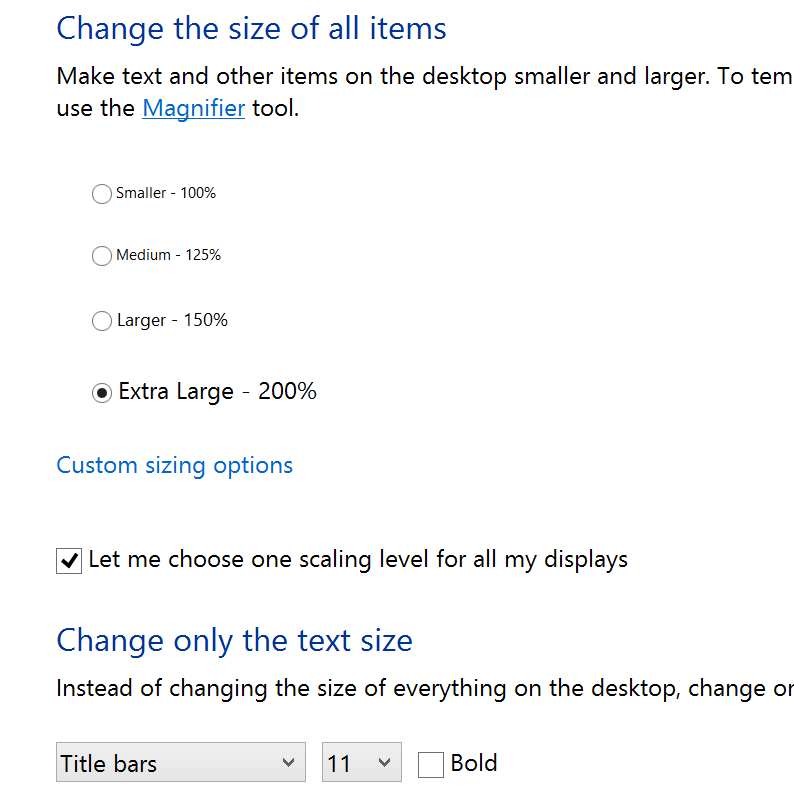 Any idea how I could get this to work in Windows 8.1? I've read some comments which seem to indicate that this should work, though Paul Thurrott mentioned at his Winsupersite article that he either didn't get this to work.

You could try to check if there is a newer display driver on the manufacturer's website or as optional in Windows Update. But I don't think this will change much, as I explain below.

In Windows 8, Microsoft has decided that its new and wonderful DPI algorithm, which attempts to get things sized correctly based on both the resolution, size, and pixel density of a given display, does a better scaling job than any user could possibly do.

Therefore Microsoft now decides for you on the best scaling for each and every one of your monitors depending on that monitor's properties. The slider now only means : larger or smaller than the Microsoft-calculated scaling, and it applies to all the monitors.

Another Microsoft brain-storming has resulted in the Windows 8 slider being replaced in Windows 8.1 by a list of preset percentages, which works just like the slider. The change was probably meant to underline the fact that the new automatic DPI algorithm in Windows 8.1 is even more wonderful than that of Windows 8.

Setting the "Let me choose one scaling level for all my displays" will force the same identical scaling on all monitors, no matter their size or properties, which is exactly the opposite of what you wish.

This is of course another half-assed design decision by Microsoft, based on the "Microsoft knows best" conception, manifestly untrue, which there is no way to undo except by down-grading to a previous version of Windows. One can only hope that some future update will correct this, but I think this is quite unlikely to happen.

EDIT: This has now been corrected in Windows 10, where individual scaling is now possible.

Looks like this has been solved in Windows 10. I have a Dell XPS 13 that runs at 3200x1800 at 200% scaling. I'm running an extra monitor on the display port and I'm now able to chose the scaling level per monitor. As per the screenshot, as you click on each monitor, you can choose the scaling %. 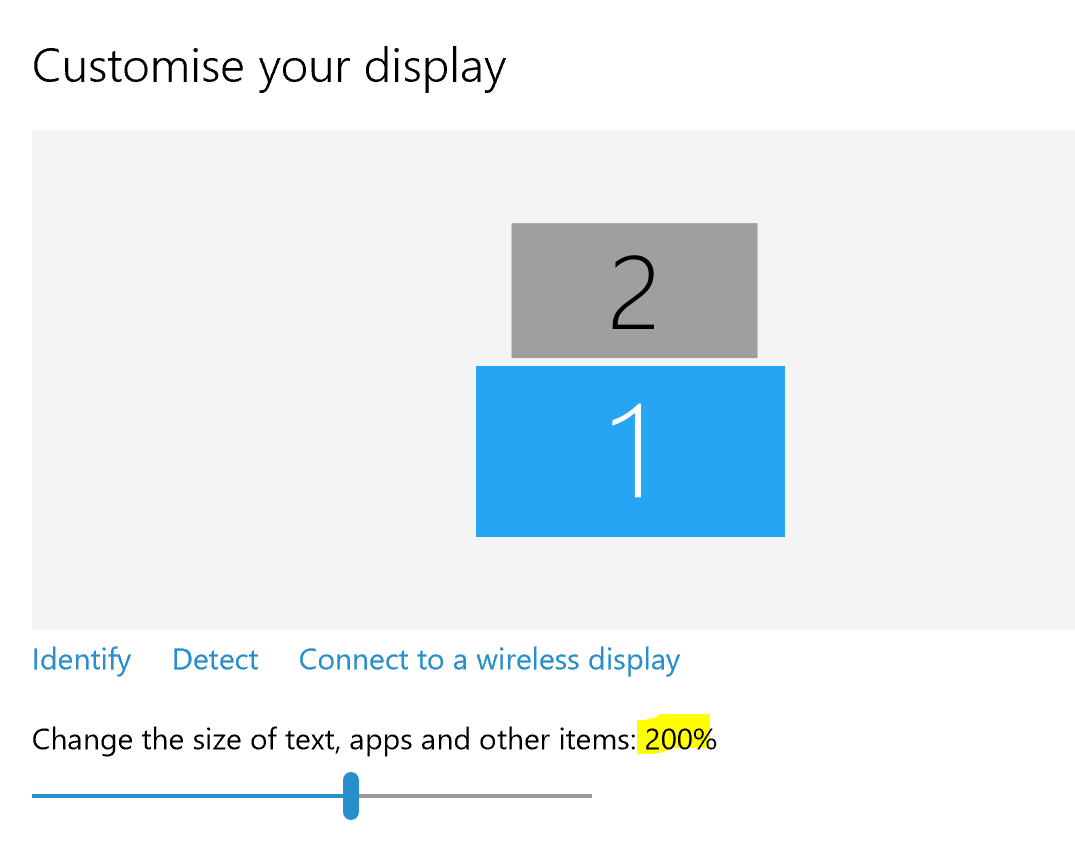 The first option is for multiple monitors with different ppi. windows will choose for you based on what the ppi is. use trial and error until you get the size you want and both monitors will be about that size. if they are close in ppi it will not scale them differently because I am pretty sure it only chooses from the default scaling sizes. http://blogs.windows.com/windows/b/extremewindows/archive/2013/07/15/windows-8-1-dpi-scaling-enhancements.aspx

Unfortunately it had some quirks in June and I don't know if they fixed it.

Not the answer you're looking for? Browse other questions tagged windows-8.1 display multiple-monitors display-settings scaling or ask your own question.

2
Strange scaling when duplicating monitors with another screen
0
Any way to prevent Firefox scaling on second monitor?
0
Display Scaling - Win 8 Control Panel
3
How to fix “The display settings could not be saved” message with Oculus Rift
0
Windows 8 Script / Method to Change scaling when plugging in monitor
18
Separate custom scaling levels for each display in Windows 10