We all know the situation when a program or the OS itself froze and the only thing you can do is paint with the millions of dialogs that the system renders. I am talking about this (demo here): 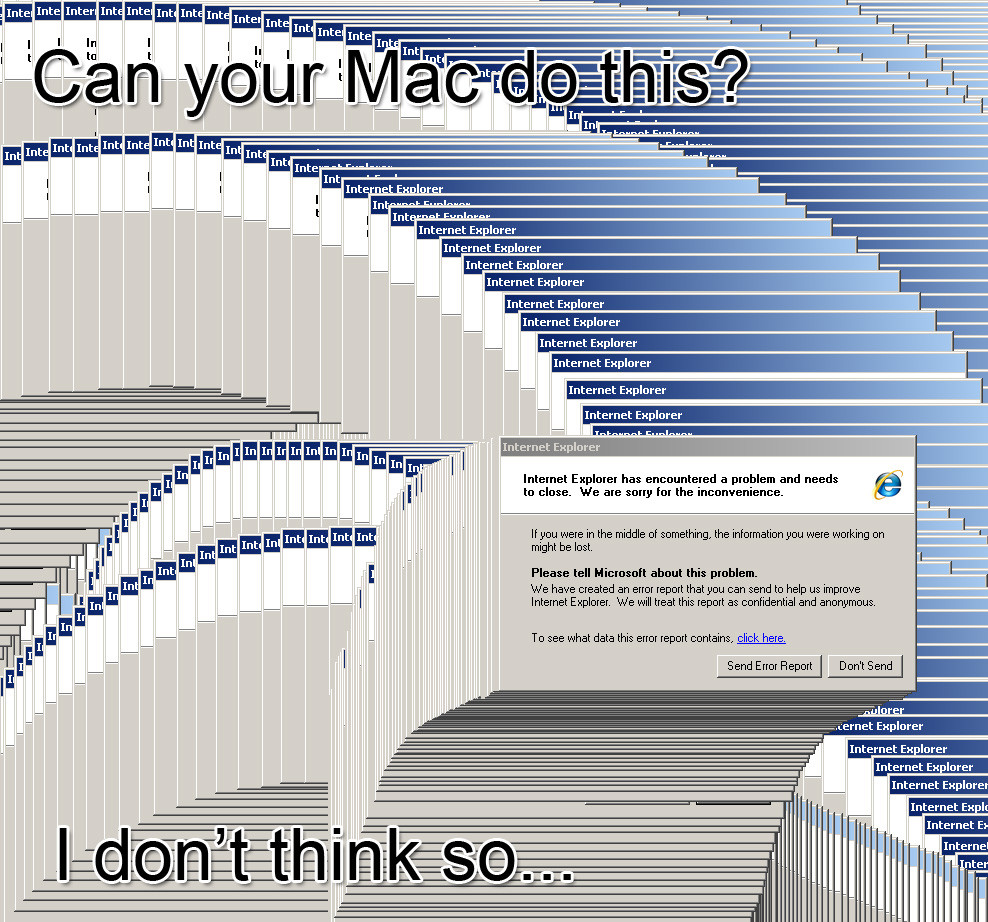 Why does this happen? And why do I always meet with it only on Windows XP? Doesn't this occur on Linux, Mac or other Windows versions? If not, why? Actually, does this bug has an official/common name at all?

That is called a “ghost window”. What happens is that the process hangs or gets deadlocked and thus cannot respond to the paint message to update its window. To handle this situation, Windows takes over and paints the window until the program becomes responsive again and paints itself (or is killed or crashes).

In older versions of Windows, a frozen window was painted solid with its background color, but in XP, Windows takes a screenshot of the window as it was the last time it was updated, and uses that to paint it. Of course if parts of the window are covered (like if you drag it offscreen), then Windows can only paint it with the background color (which is why after dragging it offscreen in all directions, it ends up completely blank).

In addition, when you drag other windows over it, they leave a trace behind because the frozen window does not respond to the paint message when part of it is uncovered.

In Vista+, Windows still paints ghost windows like in XP, but it uses a trick to make the window seem like it is still alive to some degree; you can still move and minimize it without losing the last-updated image or getting the hall-of-mirrors effect. What it does now is to hide the actual frozen window, and replace it with a new, temporary window that is made in the same size and shape as the frozen one. The new window is painted with a screenshot of the frozen window, but with a pale white-wash. Now, when you drag other windows over it, it retains the original (ghosted) image because it is not actually frozen; it processes the paint message by painting the stored screenshot.

Of course Mac, Linux, etc. all handle window drawing and management in their own ways, so they respond to frozen windows in different ways.

Not the answer you're looking for? Browse other questions tagged windows windows-xp window rendering or ask your own question.

6
How can I change the default file presentation for Windows XP
7
What does the “Apply” button do on Windows print dialogs?
5
New windows open outside of display area - What can I do?
1
Why are some tasks (even simple ones like web browsing) really slow and sluggish when I am running a 3DS Max render?
2
Browser dialogs (Alert, Confirm, & Prompt) not longer working in Internet Explorer & Firefox on a specific Windows install
5
How I make chrome page fonts render like the UI?
5
Is it a bug or intentional behaviour that the “timeout” command aborts when you maximize the window?