Which one VoIP SIP audio codec should I choose to high quality calls?

I have to select codecs from the following list:

Which one to choose and why?

I want to have best high quality voice on both sides.

I have ADSL2+ Internet connection with bit rates:

As of today, one would most likely use Opus, which outperforms most other codecs, as can be seen in the following chart (from Wikipedia): 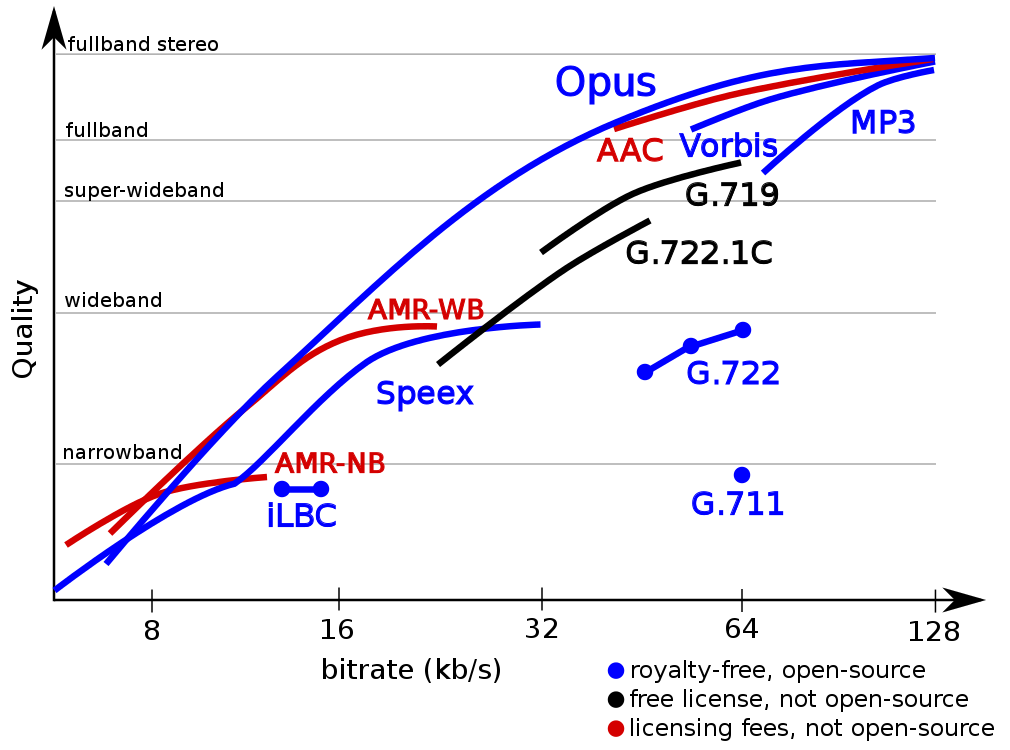 Opus works across the entire bandwidth (from narrowband to fullband), and always provides better quality than even dedicated speech codecs, due to its ability to switch encoding mode dynamically depending on the bitrate and bandwidth.

According to a few studies I've read, G.711 seems to provide the best tradeoff between required bandwidth, compression delay and subjective audio quality.

Cisco published an article in 2006, Understanding Codecs: Complexity, Hardware Support, MOS, and Negotiation, where they also evaluated the subjective Mean Opinion Score (MOS) over a couple of codecs, which mostly include those you mention. MOS range from 1–5, with 5 being the best quality, as averaged over a number of listeners (usually more than 12–15).

The results were as follows:

As you can see, G.711 still requires more bandwidth than the other codecs, which were developed for ultra-low bandwidth applications, but in your case, with ADSL, this is no issue. What you get is a very low delay with good MOS values.

A more recent 2009 study by Karapantazis et al gives an even better overview (click to enlarge): 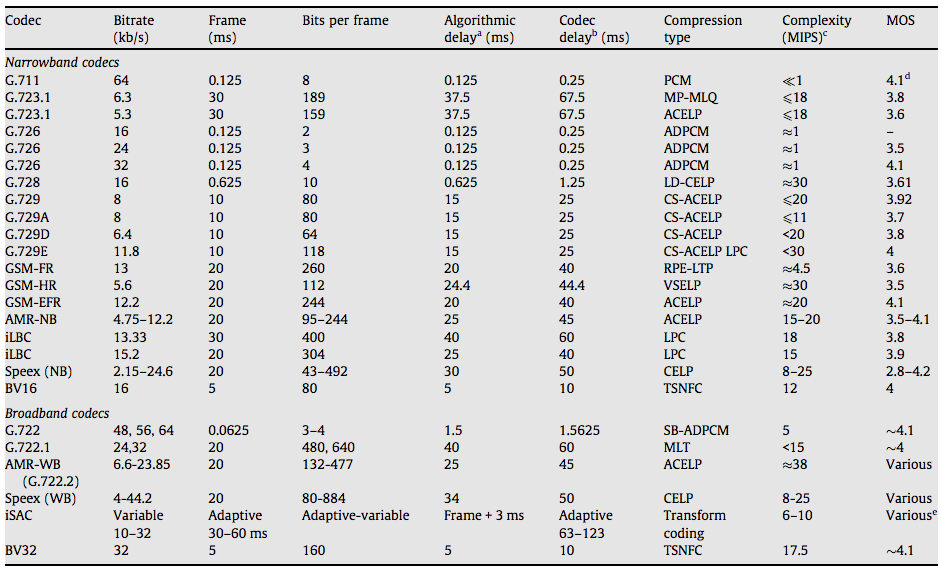 As you can see, there are certain broadband codecs which you could also take into account, Speex being very popular.

I suspect that the latest cry in audio codecs are, in that order: Opus, SILK and Speex.

Opus is a lossy audio coding format developed by the Internet Engineering Task Force (IETF) that is particularly suitable for interactive real-time applications over the Internet.

Opus incorporates technology from two other audio coding formats: the speech-oriented SILK and the low-latency CELT.

CELT itself was originally developed by the Xiph.Org Foundation (as part of the Ogg codec family).

SILK is an audio compression format and audio codec developed by Skype Limited.

Since licencing out, it has also been used by others. It has been extended to the Internet standard Opus codec.

Speex is a patent-free audio compression format designed for speech and also a free software speech codec that may be used on VoIP applications and podcasts.[6] It is based on the CELP speech coding algorithm.[7] Speex claims to be free of any patent restrictions and is licensed under the revised (3-clause) BSD license. It may be used with the Ogg container format or directly transmitted over UDP/RTP.

The Speex designers see their project as complementary to the Vorbis general-purpose audio compression project.

Xiph.Org now considers Speex obsolete; its successor is the more modern Opus codec, which surpasses its performance in all areas.

Not the answer you're looking for? Browse other questions tagged audio bandwidth codec voip sip or ask your own question.

1
Garbled VoIP over VPN, mainly on conference bridges
0
What is the internet bandwidth requirement for audio video transmission in terms of quality HD video and Ultra sound with full duplex?
5
Replacing my home phone with a VOIP solution?
2
Burning DVDs to disk - what audio codec should I pick?
6
Skype cutting out and skipping my voice
0
Sharing internet access - solid way to guarantee good bandwidth for VoIP and gaming?
4
Extract High Quality vs Original quality audio from YouTube?