I run Windows 7 and I've been getting strange errors from different applications, for example attempting to uninstall VMware Workstation causes the following error:

When I attempt to run Process Explorer (which has always worked perfectly) I get the error "Unable to extract 64-bit image. Run Process Explorer from a writeable directory." even though I've tried it in multiple directories I have write permissions to. Only when I launch it as an Administrator will it run correctly.

I believe it may be due to the environment variables as I added an extra path to my "path" variable to allow me to execute easily in cmd from any folder but I've since not only removed it but performed a System Restore and I'm still getting the same errors.

Here's the PATH variable for the system:

and here's the user TEMP variable:

Are these errors caused by my editing of the environment variables or is there another problem?

EDIT: I think I've found the problem, I used Process Monitor to see what was going on and it appears that nothing can write to my Local Temp folder. Here is the result when it's run as a normal user: 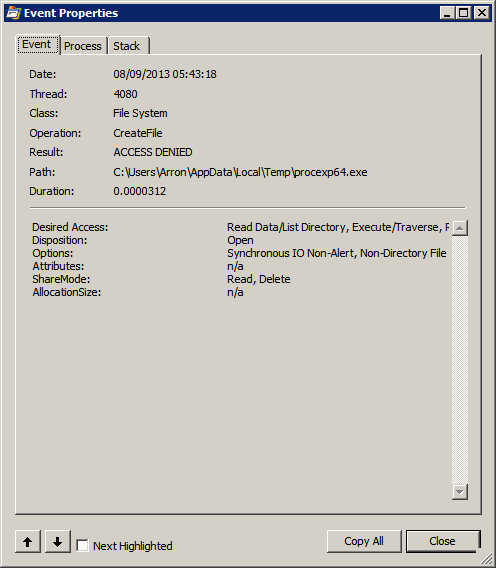 But when run as admin it succeeds: 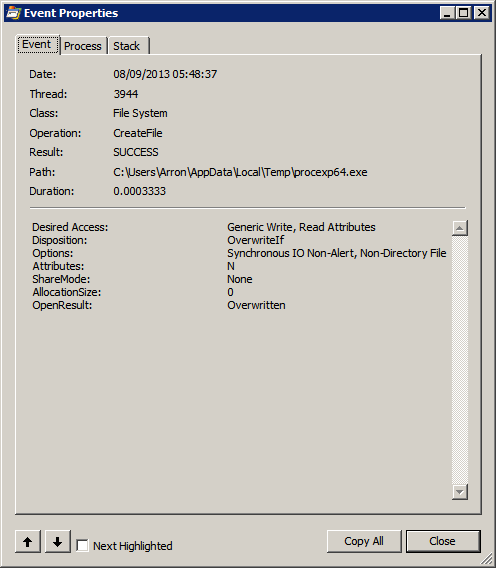 The main problem is I can't see anything wrong with the permissions of my temp folder, it seems that Everyone has read and write access: 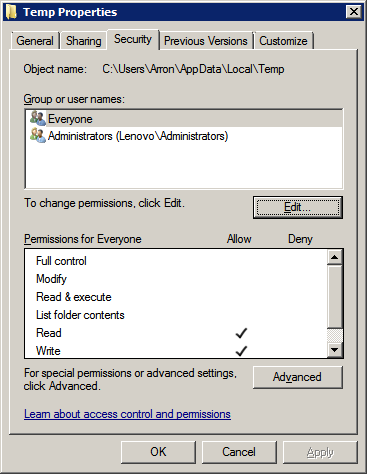 I've also got the full Process Monitor logs for both launching as a user and admin if they would help at all.

I seem to have found the solution, somehow the permissions for my Temp folder were changed so I no longer had full control. Now that I've added myself back as having full control I'm no longer having the errors from Process Explorer.

If a software restriction policy is set to prevent exes from running in folders like AppData\Local\Temp, this error will also occur. In this case an unrestricted path rule can be set in Group Policy as

A reboot should not be necessary.

Not the answer you're looking for? Browse other questions tagged windows-7 file-permissions path environment-variables or ask your own question.

1
I can't get Path to recoginize Java SDK
4
Powershell systemroot in $env:path different when AC elevated
0
%PATH% in Explorer bar causes error
25
TEMP vs TMP in Environment Variables
1
Why didn't SETX update my PATH when I tried adding VLC? (Windows 7)
0
Windows: Can't launch any program from command prompt
0
EXEs not executing on Win 10