Networking is broken in my VMware 10.0 VMs after upgrading to Windows 8.1

I have a VMware Workstation 10.0 installation with several virtual networks including the default host-only and NAT networks.

After upgrading to Windows 8.1, the NAT network was not working. I booted an Ubuntu VM with the default network setup that was previously working, and it sat for a long time during startup saying it was waiting for the network. After it finally started up, an ifconfig showed no IP address for eth0.

How can I fix the broken network?

Had the same problem with workstation 8.0.6. I only stopped all running vm's, gone to Home-Tab, selected Virtual Network Editor and did a "Restore Default". That was all. Then when i started the vm again, i got a window asking for the new network type (home network, working place or public network) and after defining my type all worked again as before. 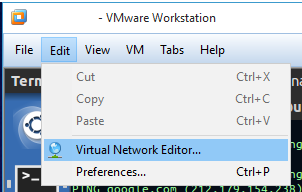 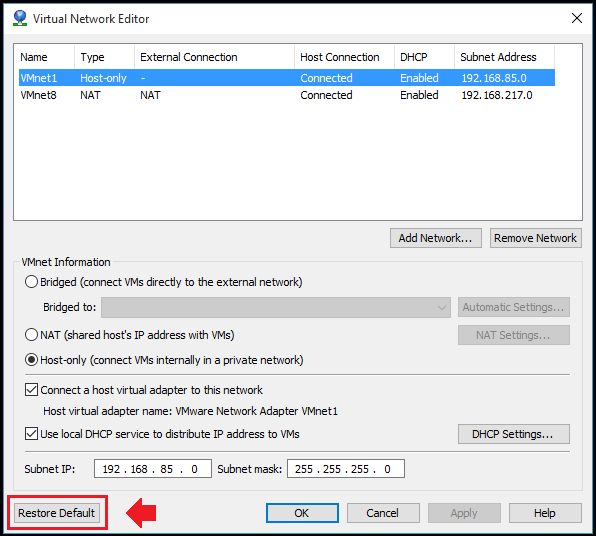 Run the VMware 10.0 installer again, and select Repair on the first screen. After it finishes the repair process, run the Virtual Network Editor and check your network settings. If you had customized any of the IP addresses on your virtual networks, you may need to redo those settings. If you had any additional custom networks, you may need to re-enter them from scratch.

If you have a complex virtual networking setup, it may be a good idea to take a screenshot or make some notes before upgrading to Windows 8.1.

you should see it in the adapter setting now..

I found another thing that can cause these symptoms. I had installed VMware Workstation 10.0.1 after the Windows 8.1 upgrade and did not have exactly the same issue. But DHCP quit working for the virtual machine behind NAT so it had no IP. Then I found the VMware NAT Service was not running and could not be started.

I first tried Restore Default" (as recommended by Marcel Krommenhoek) and the VMware NAT service began to run again. HOORAY!

UNTIL... I added my necessary port forwarding back into the VMware NAT. BOO!

I found if you set up port forwarding in VMware NAT that includes a host port already in use* on the host, the VMware NAT service fails to restart.

In this case, Skype was the problem. It was using port 80.

It was when I added port 80 forwarding in VMware NAT that the service failed to restart.

To fix this, I turned off port 80 use in Skype with:

After that I could set up forwarding for port 80 and the VMware NAT services runs fine (and correctly forwards the port into the VM).

NOTE 1: This was only in the "Desktop" Skype which I had added to this Windows 8.1 system. Apparently the "Modern" (Metro) Skype does not do this.

NOTE 2: It sure would help if the VMware Virtual Network Editor would warn you that you are trying to use a port already in use!

I had a similar problem. But I use VMware Player 7 instead Workstation and Windows 8.1 like local PC and Ubuntu 10.04 like guest SO.

I resolved the problem deleting the NAT Adapter and then creating a new one.

I enter the Ubuntu VM and voila!, It works!! I assume that is the way to repair in VMware Player, since there is not the same option as in Workstation.

I hope this help you!!

I am just dropping this here as I've spend half a day to solve this issue. I used the NAT option as well, but VMWare v12.1.0 contains a bug. This has been resolved in v12.1.1. See the topic on vmware.com

Just run VMware as administrator in Windows 8 compatibility mode and everything should work.

HussainHussain
1
Add a comment  |
Highly active question. Earn 10 reputation (not counting the association bonus) in order to answer this question. The reputation requirement helps protect this question from spam and non-answer activity.

2
Display color profiles broken after upgrading to Windows 8.1
3
Windows 8.1 in a VMWare Workstation 10 guest's mouse is missing, but only sometimes
1
Sharing internet from Mac to Windows in VMware
1
VMware workstation 11 host-only networking with Kali Linux (Guest) and Windows 8.1 (Host)
3
"How do you want to open this file?" dialog appearing at random after upgrading to Windows 8/8.1
0
Internet not working in Virtual machine (Ubuntu 14.10 ) running on windows 10 host
2
Blue screen after Windows 8.1 update
2
How to re-enable Windows XP Mode support in VMware after Windows 10 upgrade?
0
Does VMWare Workstation create virtual network adapters other than vmnet1 and vmnet8?
2
Bridged network connection using VMWare Workstation doesn't work